I was staring out of the window on the way to Tatton Park thinking it is a bad idea going to the Foodies Festival today. It looked dull and cold and obviously the grass would be muddy from the rain. We parked up at Tatton Park and walked to the entrance. We had a browse at the stalls before deciding what to purchase. Once we saw the oysters at Loch Ryan we went straight for 4 at £1.50 each and then the man suggested we go for 6 oysters at £8 which we went for in the end because we couldn’t resist. The oysters were just so big, juicy and fresh, it just needed a squeeze of lemon and they were ready to slide down our throats. We had people behind us watching us eat the oysters and contemplating whether to try them or not. They were just so yummy, we were considering to come back to get some more later on.  We had passed Loch Fyne on the way in and passed on the oysters there as there were shucked at the back and it was an inspired decision in the end. 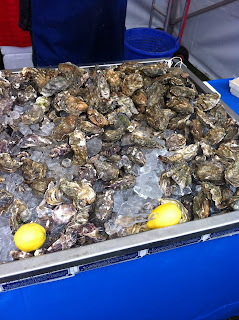 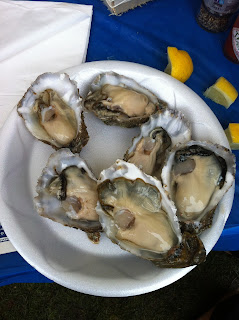 Most of the stalls were generally selling burgers which were a bit of a let-down because I didn’t really want burgers. I wanted something special from a big festival like this. It was a shame that there were not more exhibitors from local restaurants offering sample dishes rather than meat and bun combos, the Liverpool Food and Drink festival last year was better in this regard with the likes of Italian Club Fish and Puschka. Since I had no choice I went for a rib eye steak sandwich since the queue had died down at Gaucho BBQ. We realised why the queue has died down because there was about a 20 minutes wait for the beef. The steak was really good, not chewy or tough and it had a sauce to compliment the steak.  At £6 for a few slices of meat it was a bit on the expensive side. 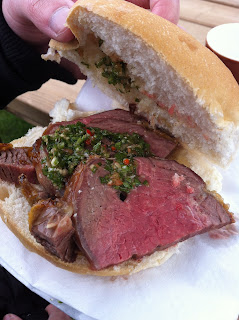 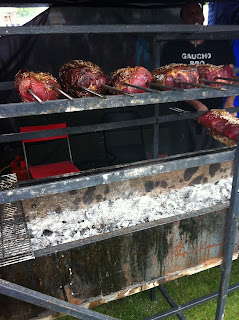 After the steak sandwich we went around all the stalls hunting for something special, maybe some sauces for our steak tonight or something we have never tried before. We came across this The Sauce Queen and tried a few sauces, the peppercorn and brandy and the porcini mushroom. In the end we purchased peppercorn and brandy sauce as it was really tasty and flavoursome from the brandy, perfect with our ribeye steaks at home. Although I was looking forward to our steaks that night I was still feeling rather hungry as we did come to the festival on an empty stomach and it remained so.
We spotted people eating something on a skewer and we soon we saw this van which we didn't catch the name of selling mozzarella and chorizo lollipops, they were also selling it in a bun but we thought the lollipop we something different and to be honest we didn’t really want any bread as you might have gathered. As it started to rain I went to stand near a stall to stay dry whilst Mr Nom queued up for the mozzarella and chorizo skewer. I am not really much of a chorizo lover so I kept demolishing the mozzarella bites whilst Mr Nom was wolfing down the chorizo. It was nothing special really in taste, just your average mozzarella and chorizo so it won’t be something I would purchase again. 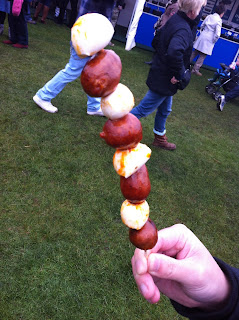 An ever present at food markets and festivals, the churros stand was busy as always with around ten people ahead of us. Partially, I wanted the some salted caramel ice cream from one of the ice cream vendors but I did feel rather cold from the rain and the cold weather and I rather order something that would fill me up but Mr Nom wanted the churros so we queued up for that. We had the churros with sugar and cinnamon and a side pot of chocolate. I only ate about 2 pieces and felt rather sick after it whilst Mr Nom polished the rest off, I kind of felt I should of went for the ice cream after all. 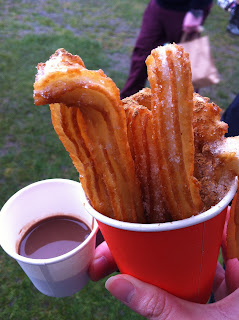 After walking around the festival several times disappointed we couldn't find anything else to take our fancy we thought we should try some beverage there, just at that point this girl from the Aperol stand approaches us. I looked at the drink, it was orange, I suppose the colour kinda appealed to me and she said it was an Italian liqueur, orange and rhubarb flavour sounds rather pleasant. After waiting a few minutes for the guys to make the cocktail I couldn’t wait to try it. I took the first sip and it was just horrible, I think it consisted of Prosecco which I guess I’m not very fond off. I felt like leaving it after that first sip but Mr Nom and I tried our hardest to finish the cocktail and go. 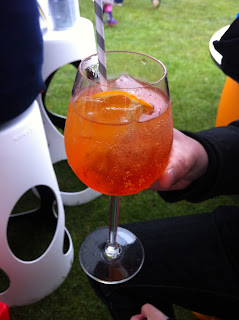 The cocktail was the last thing we purchased before leaving, I was frankly too cold to hang around and honestly, it was not a great food festival. In actual fact I prefer the Liverpool Food and Drink festival as it is bigger and the variety of stalls is a lot better. I doubt I will attend the Foodie Festival next year unless there are more interesting exhibitors. Additionally, I am wondering where the pop-up restaurants were as I didn’t spot any beyond Loch Fyne and a Morrocan type affair at the entrance.  For the vast area the festival seemed really cramped especially the producers market sections.  If it was spaced out a bit more then it may have helped the mudbath situation from developing in the pathways between the stalls. Lastly the entry fee was disproportionate to the quality on offer.  Even with a half price Groupon deal at £15 for 2 it felt expensive for what it was, especially when factoring in the £5 for parking.
Posted by Nomface at 18:34