Everyone has their go to place when no particular places have been decided on or prior reservations made.  Over the last few years Big Bowl, situated on Berry Street in Liverpool has been my go to place.  As close to a Hong Kong style café as you can get along with Café de Pearl on Bold Street (which I don’t rate as highly as Big Bowl) it offers good quality grub at a very reasonable price, as long as you know what to order.  Being of Chinese ethnicity I would probably only ever order the Western take on Chinese food such as sweet and sour pork, lemon chicken etc about once in every hundred visits to Chinese restaurants.  Whilst there are other delights to be enjoyed I still get the odd pankering for them along with the classic crispy duck (recently overtaken in my books by Peking duck after a visit to Hong Kong – post to follow).

Whilst the official title of the restaurant includes Noodle Bar, it is the rice dishes that have become my favourite comfort meals.  One of my absolute favourites is the Hainan chicken dinner set which is basically chicken boiled with a pork and chicken broth so that the skin and chicken meat takes on the flavour of the broth, served with rice prepared using chicken stock so it produces a delicious oily rice.  The set at Big Bowl is completed by a bowl of broth with Chinese greens and served with ginger oil for the chicken and to mix in the rice.  At under £7 this is a true bargain by today’s standards where a simple starter would command the same price for nowhere near the quality, quantity and skill levels involved in preparing the Hainan chicken dinner. 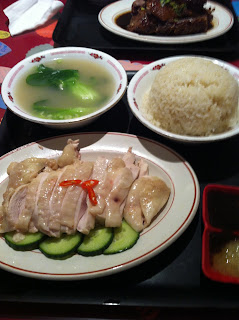 Another favourite of mine is the five spice duck dinner set which is basically the same as the Hainan chicken dinner set but with five spice soya infused duck in place of the chicken.  A richer dish than the chicken but equally as satisfying.  The duck is cooked for a long period of time so that it takes on the deep five spice and soy flavouring.  I tend to scoop up the remaining sauce and mix it into the rice which brings back memories from my childhood as I was never interested in boring plain white boiled rice. 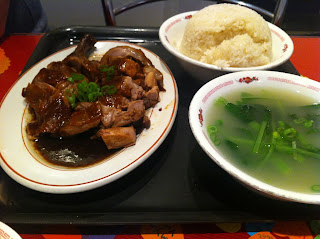 Living up to its noodle bar moniker we once ordered the Big Bowl Noodles.  What came was a mammoth bowl of noodles topped with char siu, chicken, egg and Chinese greens.  The bowl was literally bigger than the circumference of my body (see picture below)!  They also do a rice version of the Big Bowl but how anyone can eat so much rice in one sitting is beyond me unless you happen to be a sumo wrestler. 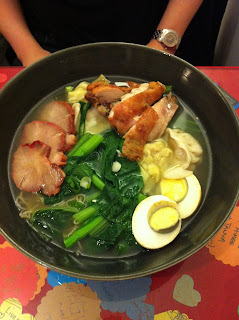 There were some misses along with the hits and these tended to be the smaller dishes such as wor tip (fried dumplings) and salt n chilli siu mais which tasted like they were bought in.  However the main meals more than make up for it.  The drinks menu is also interesting with a personal favourites being iced yin yeung (half tea half coffee) and iced lemon tea.  Hong Kong classics such as iced red bean are also on the menu.  To finish I can’t look past Hong Kong style French toast with syrup and sandwiched with peanut butter, naughty but so good. 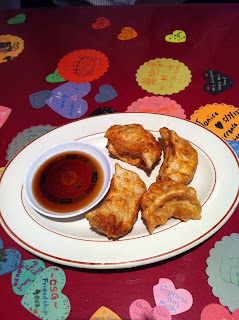 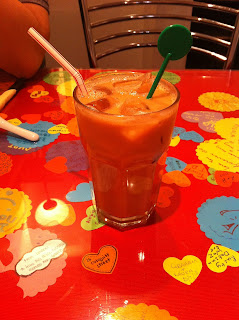 A fulfilling meal for two including drinks can be had for about £20.  If you look past the tackiness with the glass table tops with hand written messages from patrons on stick it notes below then you would be hard pressed to find Chinese food of such quality for the same price in Liverpool.