With the introduction of the new menu last week we were keen to revisit Solita after enjoying our first visit last year.  Situated in the hot bed of activity of the Northern Quarter it seems that Solita can do no wrong with the constant Twitter updates advising on new specials and seemingly daily messages informing people when the restaurant is full.  There is a no reservations policy for tables below 6 which is highlighted on the website and the walk-in method seems to work well.  We visited yesterday on a Sunday about 5pm and were seated right away.
The new menu is a mixture of classics from the previous menu and innovative new dishes.  We didn’t reorder any dishes we had previously tried and wanted to work through some of the new dishes that we had noted with interest from other fellow bloggers.  The behemoth I had my heart set on was the ‘Once in a Lifetime’ burger, an intimidating tower with onion rings, coleslaw, buttermilk fried chicken, pulled pork, beef and bone marrow patty and BBQ sauce on a sweet brioche bun. 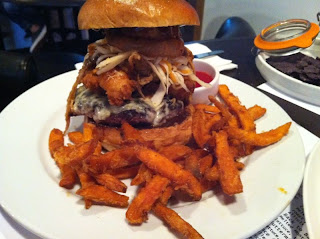 I expected this to be a messy job but I was surprised when I was able to gobble down the whole tower with little mess.  Although I admit that I did share it with Mrs Nom as I wanted to try some of the other new dishes as well without being defeated by the food wall.  A few nights ago we visited Byron in Liverpool (review coming soon – shameless plug) and the burgers there seemed to be quite dry and lacking enough sauce hence losing my interest half way through.  There was no such problems with the Once in a Lifetime and the mass of ingredients had me hooked until I finished every last bite.  We swapped the accompanying house fries with sweet potato fries but didn’t realise that there would be a supplement which was more than the differential between the prices if ordered as separate sides.
Along with the behemoth we ordered a selection of small dishes including the lucky 7, deep fried chicken livers with neck bone gravy and deep fried mac and cheese.  The first two being new additions to the menu.  We wanted to order the DIY steak tartare but unfortunately this was not on the specials on the day.  This is soon to change to DIY tuna tartare so I guess that gives us a pretty good excuse to return, not that we need one.  The chicken livers were a delight when dipped in the neck bone gravy and we kept the remains of this as a dip to not let it go to waste.  It reminded me of KFC with gravy which I used to be so fond of.  The lucky 7 was consisted of a layered dip with seven ingredients served in a small jar with a healthy supply of blue corn chips.  The top layers consisted of olives, lettuce and cheese with guacamole, tomato salsa and sour cream.  A bit fiddly to eat but it adds some healthy alternatives along with the deep fried items.  Our chips were also a bit on the fragmented side and we noted that the next table seemed to have a nice pile of unbroken chips but ended up leaving half of them, GRRRRrrrr. 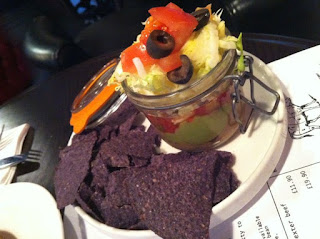 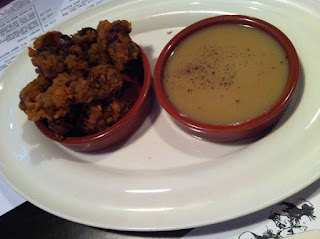 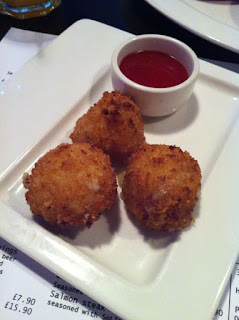 The guys on the other side of us had the hot wings although not sure what strength and were in hysterics with the heat from the chilli.  One of the staff noted this and gave them some milk to cool down; I would have let them suffer.  Some of the dishes we ordered last time round included the pulled pork sundae, salt cod fritters (no longer on the menu), hangar steak and the KFB burger.  Standouts were the KFB and pulled pork sundae. 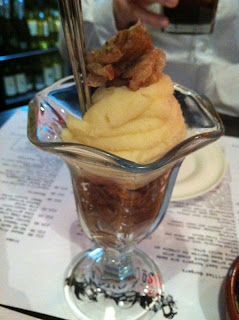 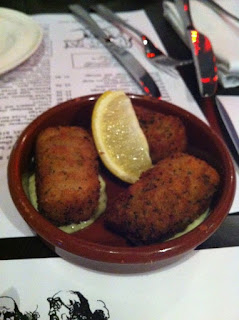 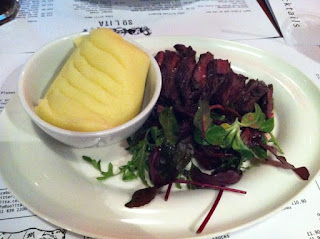 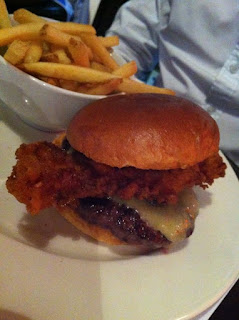 We were full but still wanted dessert so decided on something light after seeing a few huge slices of peanut butter brownies with oreo ice cream go by.  We settled for the inka grilled pineapple with coconut ice cream.  A bit disappointed with the serving size of two stripes of pineapple.  On our last visit we tried the deep fried coke which was good from memory. 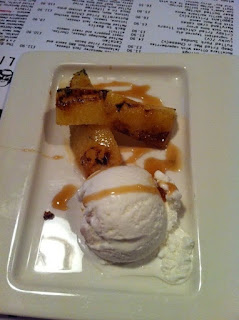 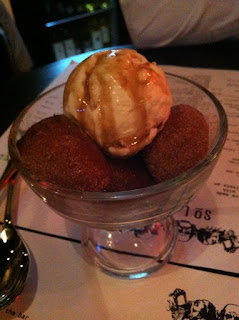 With a cult following that is ever expanding, Solita is very enticing with innovative new dishes and has sparked our interest in creative burgers.  There is a new burger soon to hit the specials for a limited time with zucchini frites and deep fried mortadella with roasted pepper marinar sauce that has us planning our next visit already…….