Since the inception of this blog, of which the name was inspired by watching Mrs Nom tucking into the Triple Nom burger, there were rumours of Almost Famous crossing the divide of the M62 and setting up shop around the Ropewalks area.

We were very kindly sent an invite to the opening last night and during the whole day in work I could only think about munching on burgers and wondering what specials would be on the menu. With the launch also coinciding with the Browns party in Liverpool One we decided that it would be a few drinks there and then onto Parr Street for our burger fix. After all we would need something more substantial in place of the canapés served at Browns.

What I hadn't bargained on was nearly being unable to drag Mrs Nom away from the assortment of drinks at Browns, any more down her neck and then any efforts would be futile! Eventually managing to persuade her to leave with the promise of returning later.  Having finally dragged her out we made the short stroll over to Parr Street.  Situated directly opposite Santa Chupitos it is hard to miss when the sliding garage doors are open with the massive Be Healthy! neon sign being on show with the unmistakeable burger slogan below. 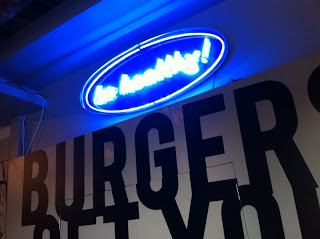 We recognised the tables and chairs from our visits to the temporarily halted Manchester branch and Lust, Love, Liquor & Burn.  With a decent number of numbers, with ours being number 19, including some standing eating space it seemed quite spacious with a large bar area. 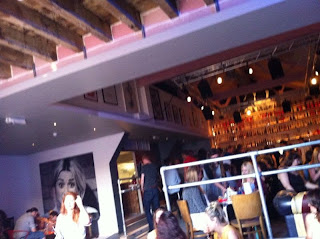 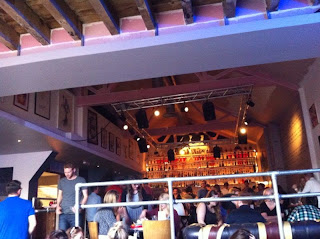 With Mrs Nom wanting more liquid refreshments than meaty burgers we ordered a River Phoenix to share, a double cheeseburger with bacon, bbq fired onions, frazzles baconnaise, chipotle ketchup, bbq sass and fresh chilli along a few sides of winning fries and coleslaw.  Topped with a huge amount of bacon and fried onions it was a messy job but satisfying.  Just what we needed to soak up the alcohol. 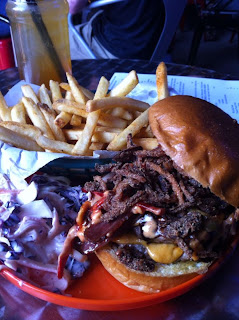 Mrs Nom found it humorous that I found comfort that the frisbee the food was served in was made in Germany, somewhere that I’d expect to have some suitable degree of laws and regulations to ensure no harmful chemicals were used which could kill dogs or children through chewing.  There were a few other burgers which are from the menus in Manchester such as our old favourite the Triple Nom, Sloppy Juan and the Triple Threat, of which we will return sometime very soon to sample.  In particular there was one called Kids in America with triple candied bacon which has sold it for me for next time.  New fries include True Romance which if I remember correctly was topped with chilli and Lucky Pig which with pulled pork.

We were given a drinks token each on arrival and the cheerful bar staff told us we could choose anything we wanted on the menu.  I went for the Deep South Iced Tea and JBs Grape soda for Mrs Nom,  both were punchy on the booze and refreshing.  I also wanted the boozy milkshake but with the number of drinks down at this point it would have made me feel sick.  No doubt we will be back to repay the great hospitality shown to us.  The best bit of all is now having this on my doorstep, well for Thursdays to Saturdays at least as they are the current planned opening hours. 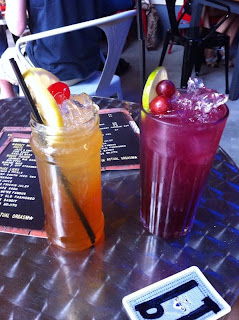