We are always the last it seems to try out the latest openings around Manchester, although having to travel from Liverpool may play a part in that. So late to the party infact that we bumped into Hungry Hoss who told us it was his third visit!

The latest venture from the New Moon pub empire sees them trying their luck on the site of the former Crown pub on Fountain Street. The interior is warehouse wooden and reminded me of a smaller Manchester House complete with booths. The cocktails were well priced and Mrs Nom quickly eyed up a strawberry and mint martini at a shade under £6. 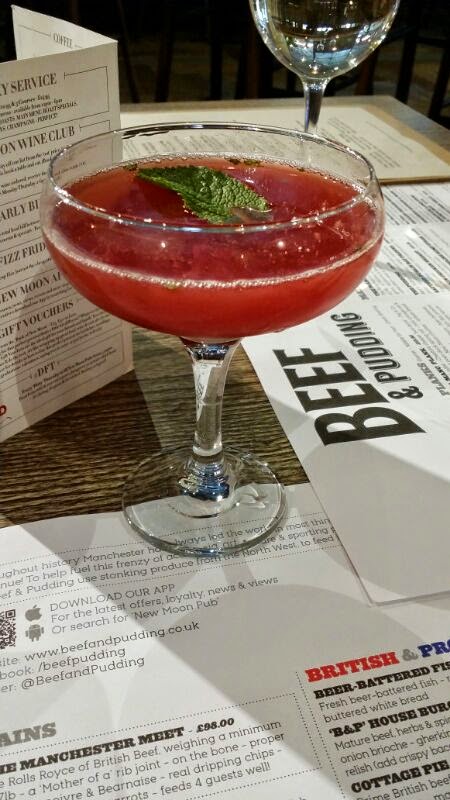 Being a Sunday I felt like a roast so stuck with the set menu whilst also ordering from the main menu. Mrs Nom chose the ‘Blanc’, billed as fresh crab from the North Wales coast, pink grapefruit with coronation mayo. It was served in half a grapefruit peel like an orange sorbet dessert. The grapefruit we felt overwhelmed the crab due to its bitterness, we should of went for one of the planks which seem better value and more interesting. 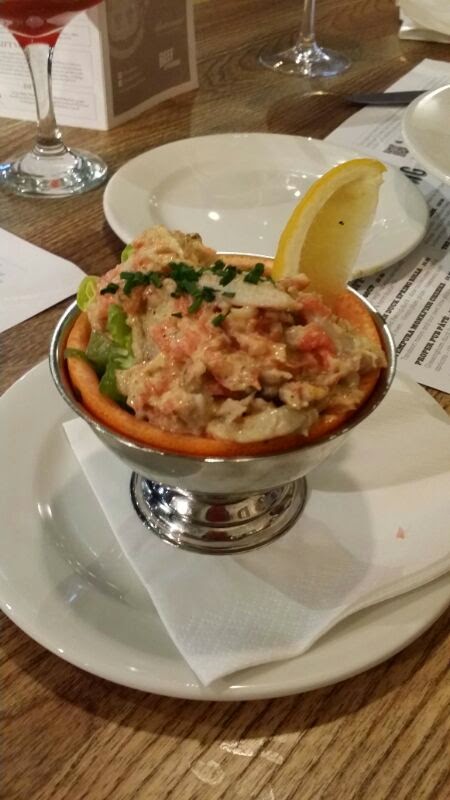 I opted for the prawn and avocado salad as a light prelude to the roast which always leaves me full and stuffed to the brim no matter where it seems. Mrs Nom took a liking to the salad and soon swapped with her crab whilst distracting me. The mains took a while to be served but my roast rump of beef with a big crisp Yorkshire was a proper hearty serving. The beef came pink as requested and exactly what I wanted for a roast, could of done with more gravy though but I didn’t ask. 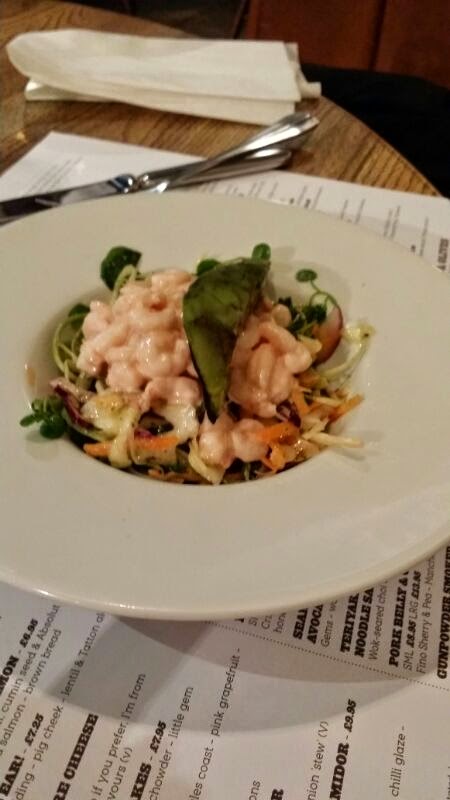 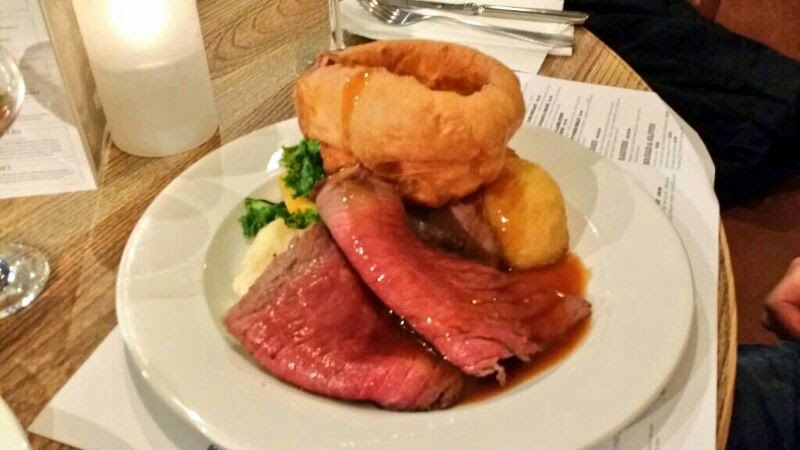 Mrs Nom went for the highly praised Pudding, Beef & Barbon Fell venison suet pudding with horseradish paste, stockpot gravy mash and black peas. It was certainly a stonking big pudding, one of the biggest I had ever seen. I knew from the first bite that I would end up finishing it as there was no way Mrs Nom could stomach it along with the small molehill of mash that the pudding was sat on top of. The venison inside packed a strong pepper punch in places, flavoursome and a good crust to boot. Some parts of the venison was a little dry but it was saved by the rich gravy served with the mash. 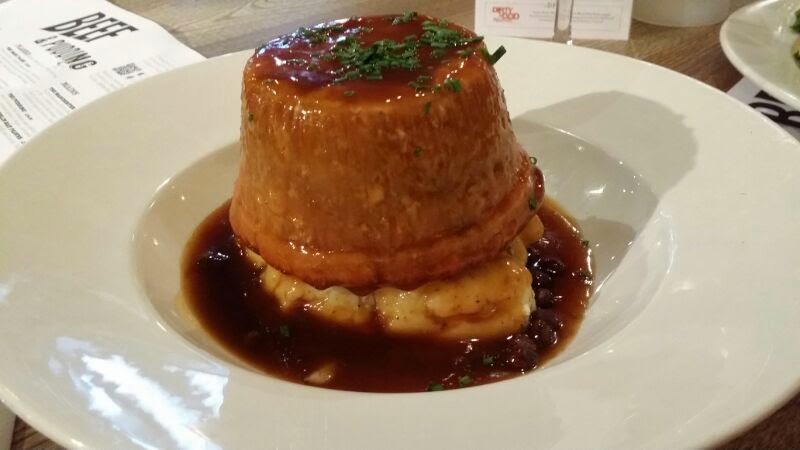 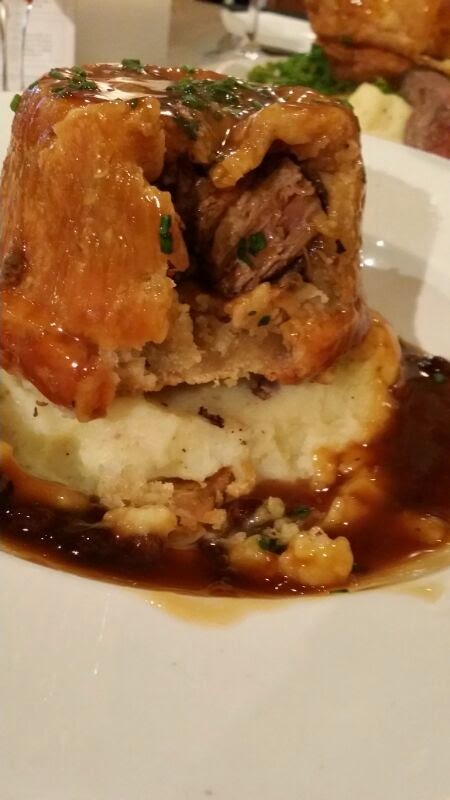 I was struggling after one and a half mains but we decided to share the sticky toffee sundae from the Sunday menu between us. Perhaps due to a bit of miscommunication we were served a sticky toffee pudding from the main dessert menu but this was quickly sorted out as we watched our helpful waitress take a copy of the menu into the kitchen. Still being relatively new, it is expected that there will be some issues to iron out. But we were slightly disappointed when the sundae arrived. It seemed to be the same as the sticky toffee pudding but served in a sundae bowl without the sticky sauce! Oh well never mind.  All in all a decent new eatery for Manchester who are spoilt for choice when it comes to dining out. 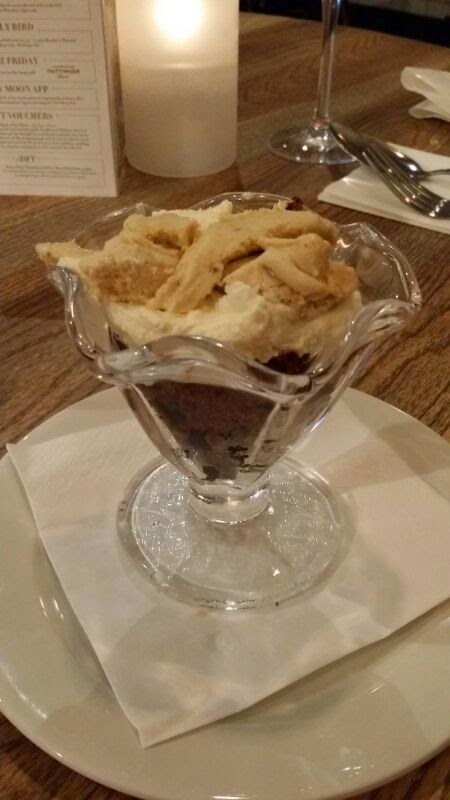