It is fitting as we reach the century blogpost milestone that it belongs to a special restaurant. Much has been written about L’Enclume, the flagship Simon Rogan restaurant that sits in the charming village of Cartmel. As well as being the 100th post it was also the venue for Mrs Noms birthday back in December, I can’t reveal her age though as I risk not being able to finish this post otherwise! The booking was made months in advance, increasing the anticipation as the date drew nearer. L’Enclume holds two Michelin stars and scored a rare perfect ten alongside topping the charts in the Good Food Guide 2014.

The drive to the village of Cartmel takes you on a journey from urban to rural, leaving the motorways to narrow countryside roads. L’Enclume is located on a side street just off the main square. We were one of the first tables to arrive at 6.30pm and were seated at a table with a view of the pass, or theatre seats as they were described. After a quick tour of the state of the art kitchen we sat down to begin the 22 course culinary adventure. The menu for the night was contained in an envelope on the table, but we decided not to look until the end, but truth be told I kind of knew what was coming from countless drooling at other blogs!

The first nibble was an oyster pebble with oyster leaf. It is fascinating how a leaf can taste like an oyster. A fresh taste of the sea with a melt in the mouth oyster macaroon, this was a divine start to the meal. 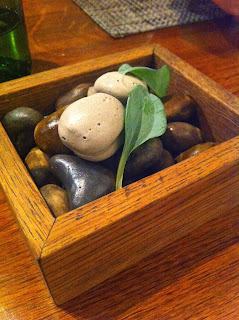 Next up was a broiche chicken ragu dumpling with a crispy skin packing intense chicken flavours. Artichoke crisp with truffle purée and grated truffle with great crunch from the crisp. 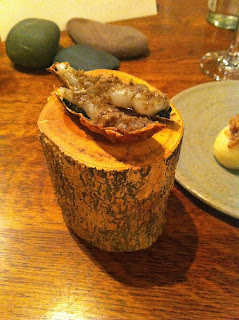 Goats cheese from Herefordshire, tarragon and malt, this was slightly too strong and intense for Mrs Nom. 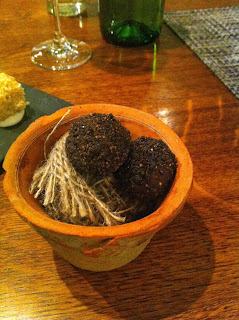 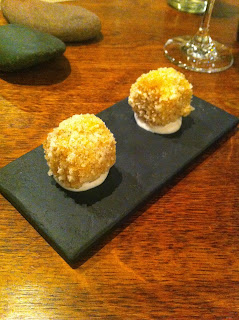 Poached quail egg with the yoke removed and filled with black garlic with crisp kale. This was a clever nibble and was the last of the appetisers as cutlery began to appear on the table. 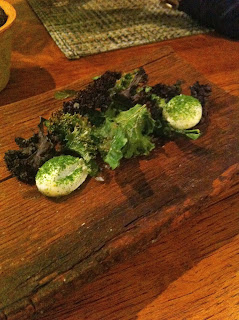 Scallop tartare with English caviar, rocket and fennel vinegar. Sharp vinegar but as a dish it came together extremely well. It was one of our favourite courses of the evening. 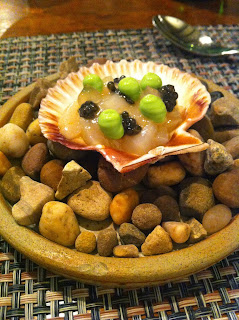 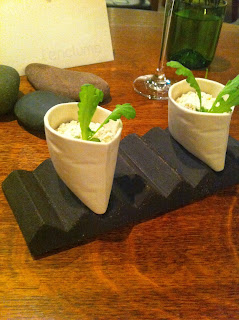 A bowl with three coloured balls were presented next and described as a hot pot with the flavours being puréed potato, lamb and purple cabbage. A lamb broth was added at the table, the balls burst in the mouth, oozing out intense hot pot flavours, a clever little dish. 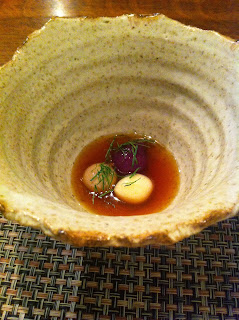 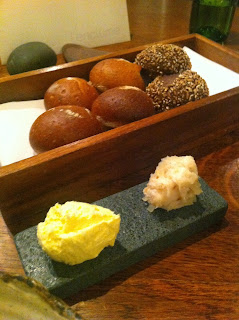 Cod yolk on a bed of wild rice and infused with salted vinegar. 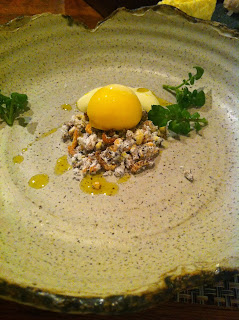 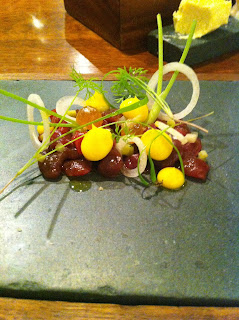 The next course was presented with a sealed pot with linseed cracker and langoustine cracker on top, after which the lid was taken off and underneath lay fresh sweet Cumbrian langoustines, black pudding and parsnip foam. 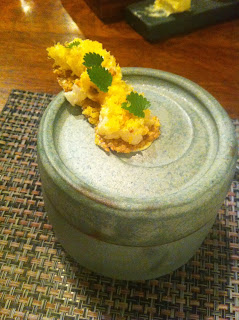 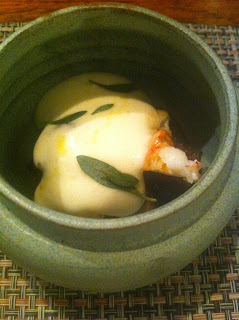 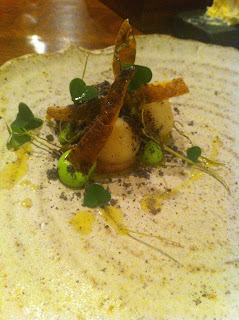 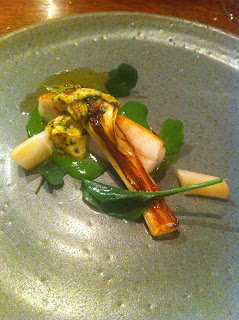 The last of the savoury dishes was 5 week aged Dexter sirloin beef with wasabi mayonnaise, tomato purée added sweetness. Smoked bone marrow was spooned over finishing off the dish. Whilst the beef was exquisite Mrs Nom found the leaves slightly bitter. 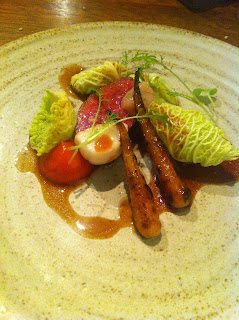 Likewise with the start of the meal a series of bite size desserts were presented first followed by larger dishes. The first was milk skin crisp and truffle ice cream which was lovely and sweet. 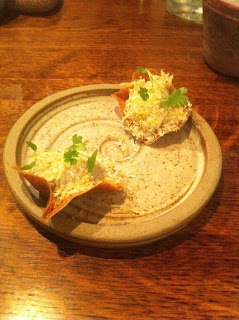 Goats cheese cup with encased pear and beetroot, a mellow cheese flavour and served frozen, Mrs Nom was too busy taking pictures at this point and was warned to quickly eat it before they melted. 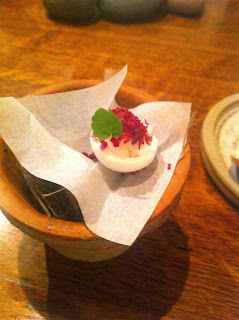 Elderflower wine reduced,yoghurt sorbet and chocolate soil. Probably the only dish of the meal which didn't really deliver a punch. 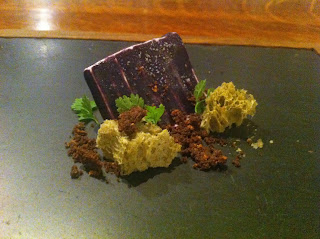 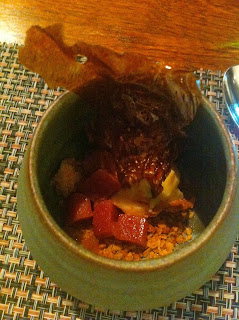 Meadow sweet mousse with Granny Smith apple, walnuts and sorrel. Tangy notes from the apple, perfect and well balanced flavours, the pick of the desserts. 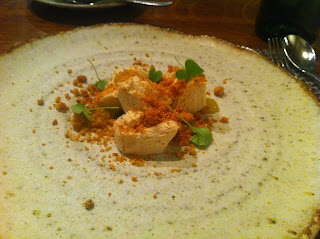 The last course were a series of coloured flavoured cones including raspberry and sweet cheese, celeriac and woodruff. Served with a refreshing Douglas fir drink. 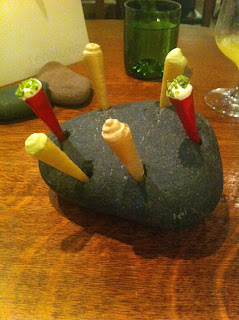 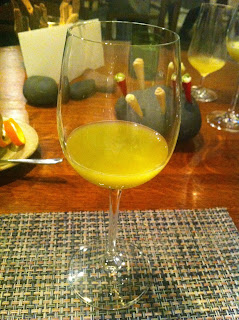 An additional dessert course of raspberry with crumbled shortbread was presented to Mrs Nom to acknowledge her birthday which was a nice touch from the restaurant. It rounded off a fantastic meal which we can say was our best of 2013. No words can do it justice, you will have to visit to find out for yourselves how good L'Enclume really is. 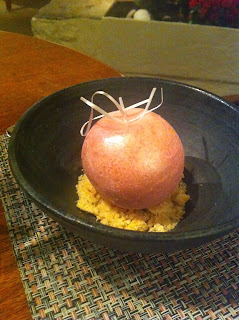