After all the hype and glowing reviews coupled with a long ambition to visit L’enclume, The French provided the perfect opportunity to sample the food of acclaimed chef Simon Rogan.  A slight different approach in this post where both of our comments are included in different colours, purple for Mrs Nom, and blue for mine.
The experience started with us being walked from the entrance of the hotel to restaurant by the pleasant concierge chap.  Immediately we were drawn to the two exquisitely elegant crystal chandeliers hanging from the ceiling.  After a brief welcome from the restaurant manager, Kamila, we were shown to our table.  We briefly contemplated whether to go for the six or ten course menu, but soon decided on the full works.  I also went for the wine pairing and Mrs Nom chose to have a little wine followed by juice as she was driving. 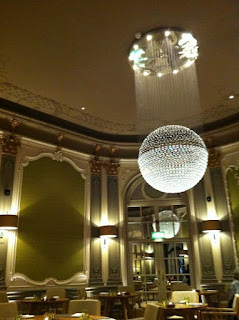 We were soon presented with the amuse bouche nibbles of rice crackers with potato mousse, celeriac and onion ash, parnip crisps with pork belly, smoked eel and fennel and mussels in edible shells .  These were delightful little morsels to prepare us for what was to come. 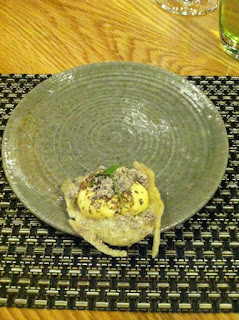 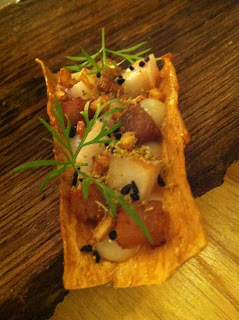 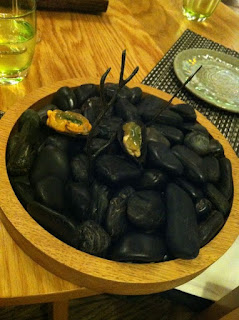 Beetroot, goat’s cheese, salted hazelnut, apple marigold
The beetroot and goats cheese course I was not particularly looking forward to because I am not a fan of goat’s cheese however I was pleasantly surprised as the goats cheese added an extra flavour to the earthy dish. The salted hazelnuts really added the texture and crunch to the dish, making it a really enjoyable first course.
I thought that this would be a sure fire hit when laid out on the menu as I am a huge fan of goat’s cheese. On tasting I was unsure whether I enjoyed it or not as the marriage of flavours was overpowered and conflicted by the goat’s cheese.  A marmite like dish that seems to divide opinions. 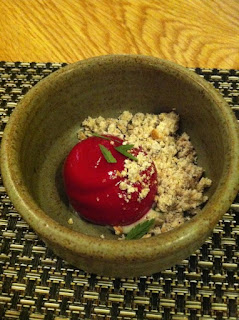 Razor clams, egg yolk, celeriac and sea herbs
A delicate and tasty razor clam course with wonderful flavours and textures. The foam was delightful, if only there was more razor clam as the bite sized pieces was not enough to satisfy my craving for it.
An extremely well balanced dish, although I would of liked to see more razor clams against the sauce/yolk ratio.  The egg yolk cutting through the sauce was exquisite. 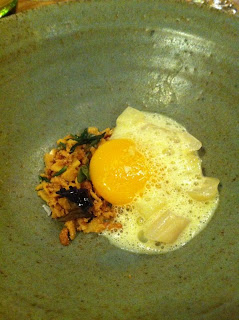 Boiled sole, onions, truffle, alliums
I didn’t know what to expect from the boiled sole dish, it was surprised to see it arrive in a puree form. The onion broth was really flavoursome and added sweetness to the dish which I enjoyed however it got slightly sickly towards the end.
The dish arrived with a small disc of sole and the onion broth was added at the table.  The fragrance and flavour of the broth was intense with depth which injected life into the fish. 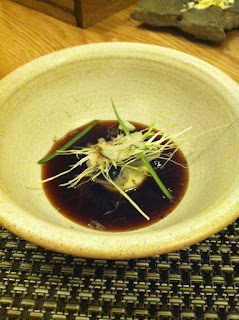 Ox in coal oil, pumpkin seed, kohlrabi and sunflower shoots
The flavours in this Ox course were phenomenal, the coal oil really lifted the dish, the flavour was intense, and I think it bought out more flavour out of the pumpkin seeds.
From various blogs and reviews this was a dish that I was highly anticipating and it delivered. The ox coated in coal oil was a great match and the pumpkin seeds and kohlrabi added some crunch to the dish. 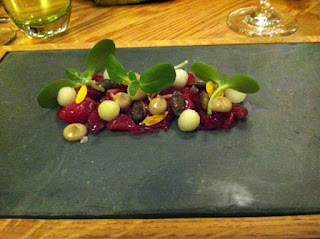 Asparagus with crevettes, watercress, duck skin
It was looking forward to this course after some bold strong flavours in the previous courses. The seasonal asparagus was nice and balanced well with flavours from the crevettes. It was a shame the duck skin was rather hard, I could not really eat it so I left it for Mr Nom to finish it off.  By this point I switched to juice and Kamila offered a juice cocktail when I was unable to decide from the vast choices and it was jolly good.
It was good to see the in season asparagus on the menu, I wasn’t quite sure what crevettes were but they turned out to be prawns. The duck skin was fried a tad too much and were quite hard to crunch through, especially when I finished Mrs Noms duck skin as well. 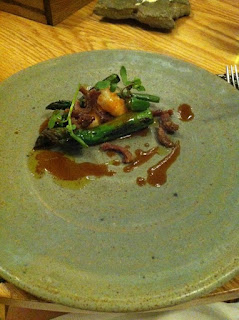 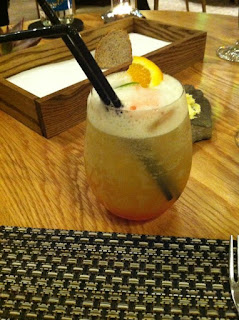 Late spring offerings, vegetables, herbs and flowers, lovage salt
I really loved the presentation of the dish, the combination of colours and textures. It was full of various flavours from the interesting leaves and different textures from the crunchy/crisp mushroom and the carrot puree.
Being the type that never orders salad anywhere I felt that this would be a filler course.  However when it arrived it was nature on a plate, very picturesque and I even enjoyed it.  The different textures and types of vegetables layered in the dish was like a discovery journey into the unknown, well salad in my case. 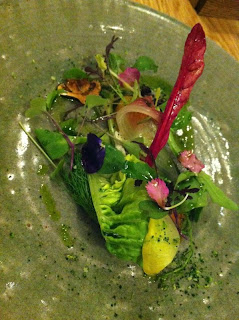 Pollock fillet with buckwheat, radishes, sea campion, smoked row butter
The Pollock fillet was very flaky and the smoked roe butter was so yummy, extremely rich and full of flavour.
A dish with a rich indulgent butter which was perfect with the Pollock, one of my favourites of the night.  By this point I think I was just eating and enjoying and not really getting caught on the detail hence my comments getting shorter and shorter. 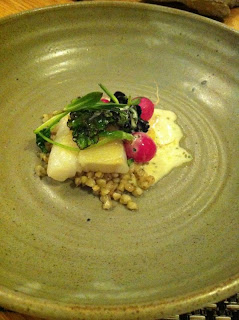 Reg’s Guinea Hen, turnips, Russian kale and offal
Unfortunately this was my least favourite course, I thought the sauce was too rich for me and I could taste a bitterness in the sauce which was slightly off putting for me however, the hen was really enjoyable.
The hen replaced the duck dish that I was looking forward to but I enjoyed its replacement.  The hen was cooked to perfection and was brought to life from the rich sauce. 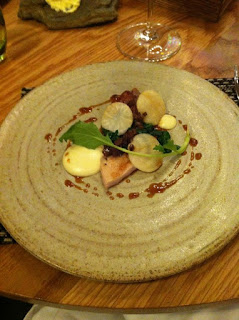 Chamomile with Cheshire rhubarb, toasted oats, Douglas fir
I was asked whether I liked rhubarb before receiving my first dessert course, I am not a huge fan but Kamila said it would change my perceptions of rhubarb after I’ve tried that dessert.  She was right and I really enjoyed the dessert. The chamomile ice cream was a delight and the rhubarb crisp was lovely. You can really taste the slight tang of rhubarb. The toasted oats added an extra dimension, the added crunch to the dessert; it really went well with the dish.
The rhubarb was quite sour which suited my tastes and yeah what Mrs Nom said above. 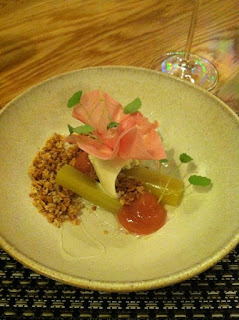 Pear, meadowsweet and rye, buttermilk, linseeds
The pear dish was really interesting; the pear was presented in 3 ways, the pear snow, the crunchy pear slices and pear puree. I was not really sure what meadowsweet was but it was the mousse in the middle. A rather light and mellow flavour contrasting with the strong pear taste. The pear snow melted rather quickly so I had to quickly finish that off first before it became a pear puddle on the slate.
On first taste the rye reminded me of Frosties and linseeds of Rice Krispies.  The pear came as different textures, a good combination and well executed. 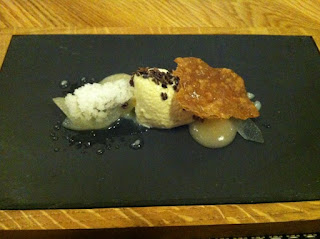 Coffee and petit fours
Before the coffee came we were treated to one surprise offering.  Sarsaprilla soda and meringue which was the icing on the cake.  Normally I would order a coffee after a meal but I was worried about my caffeine intake for the day so I opted for the peppermint tea, a refreshing tea to end off the perfect meal.  Not my usual choice of tea but it was really pleasant and light which I enjoyed with the petit fours. 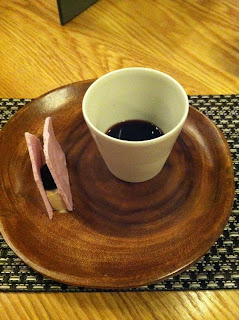 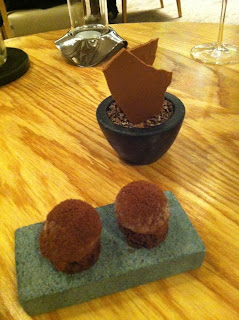 All in all, I had a rather pleasant and relaxed evening at The French. It is certainly different from the other restaurants I have ever visited. Each dish has been surprising and consisting of complex flavours/ tastes.  We will definitely want to try more dishes by Simon Rogan in the future and we cannot wait for the restaurant opening in Manchester later on.
Kamila very kindly invited us to view the kitchen after our meal.  We were introduced to head chef Adam Reid and had a very nice chat with him on what we enjoyed, what they were trying to achieve at the restaurant and what it was like working with Simon Rogan who unfortunately was at Cartmel that night.  We were impressed that Adam spent a considerable amount of time with us when his brigade were busy cleaning down for the night and his passion really shone through.  We has since booked into L’Enclume and are very much looking forward to it.