We visited Cambridge on a bitterly cold day a couple of weeks ago and had a few hours to wander around the numerous Colleges and attractive buildings. The main reason for the long journey from the North West was for the first leg of Mrs Nom’s birthday weekend, beginning with a visit to the critically acclaimed Midsummer House, a 2 Michelin starred restaurant run by Chef Daniel Clifford, a regular on TV food shows such as Great British Menu. Midsummer House is located in a standalone building next to the River Cam on Midsummer Common. 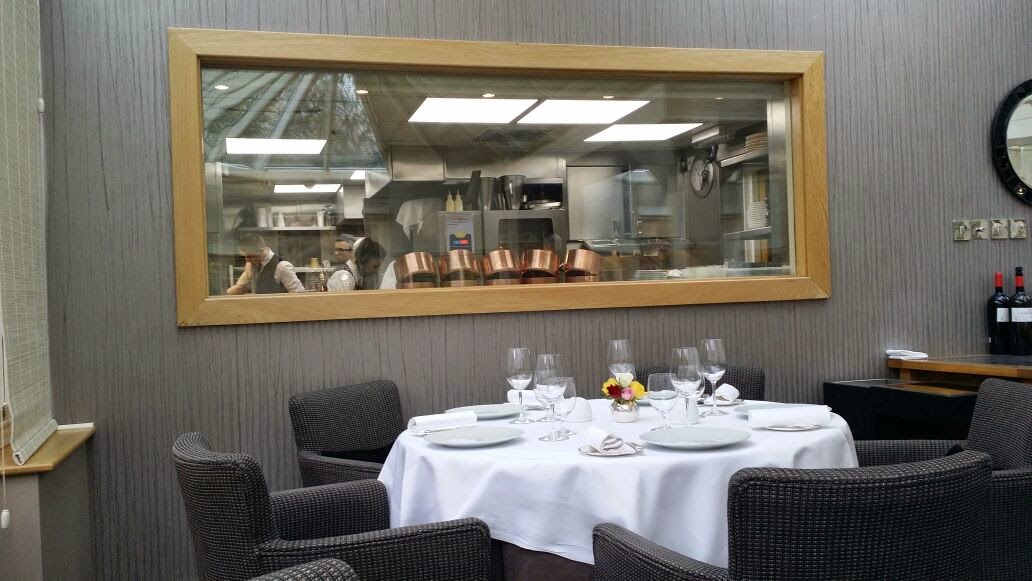 My mood was nearly ruined as I discovered a parking ticket had been issued when I returned to the car to top up before the meal. However the residents parking only sign was obscured by bushes and a subsequent appeal was successful, which was a first for me. As a word of warning for anyone visiting and parking on Aylestone Road in the future, beware as the same stretch of road has pay and display on one side but residents permit only on the other and it’s not very clear for visitors!

A choice of 5, 7 and 10 course menus are offered during lunch service and as if reading our minds when we ordered the 10 course the charming maitre’d asked Mrs Nom if she was sure. We had been pondering but out of the earshot of staff whether we could choose different menus but most places tend to be pretty adamant that the same menu is to be served to all guests at the same table. Without hesitation the full 10 course was offered for me and 7 for Mrs Nom and the maitre’d said it was not a problem and would even tell Chef we were two tables of one otherwise!

All of the courses from the 7 were on the 10 course menu and Mrs Nom welcomed the break in between as I had the additional courses. The meal began with a medley of amuse bouches and canapés, beginning with a bloody mary and celery sorbet followed by chicken liver parfait and red apple roll, mackerel wafers, sour cream with chives & lime gel and a decadent truffle cheese éclair. 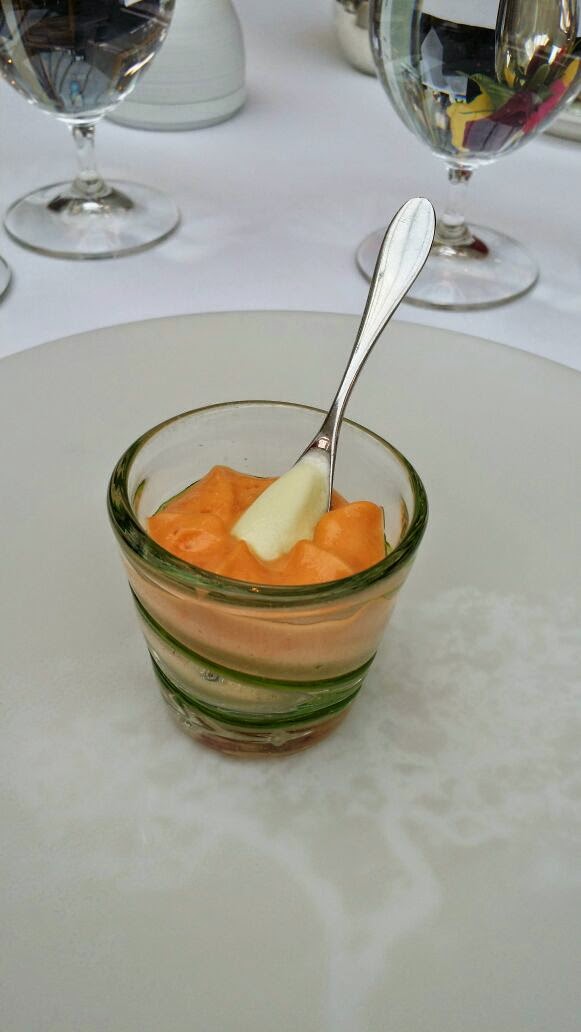 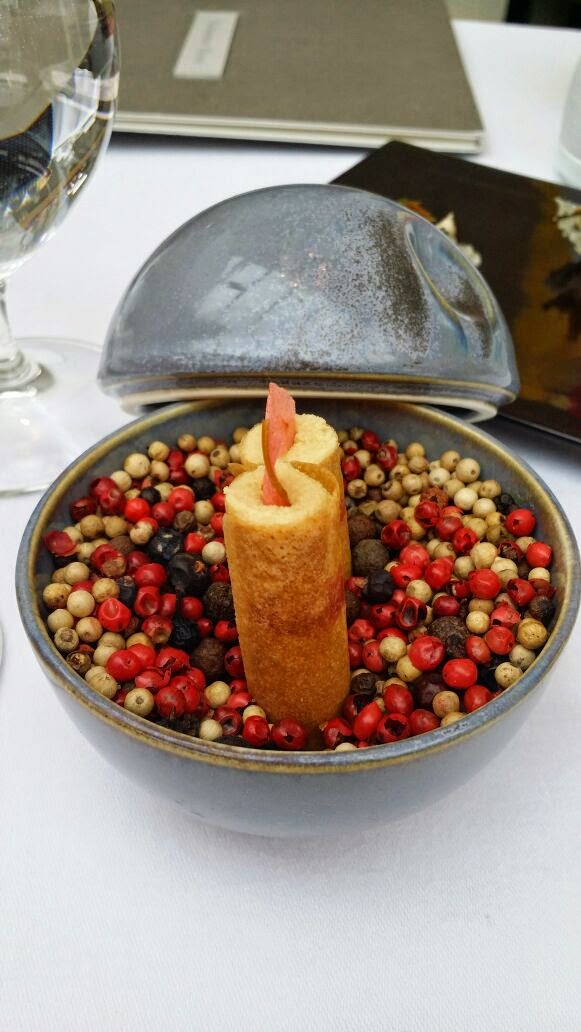 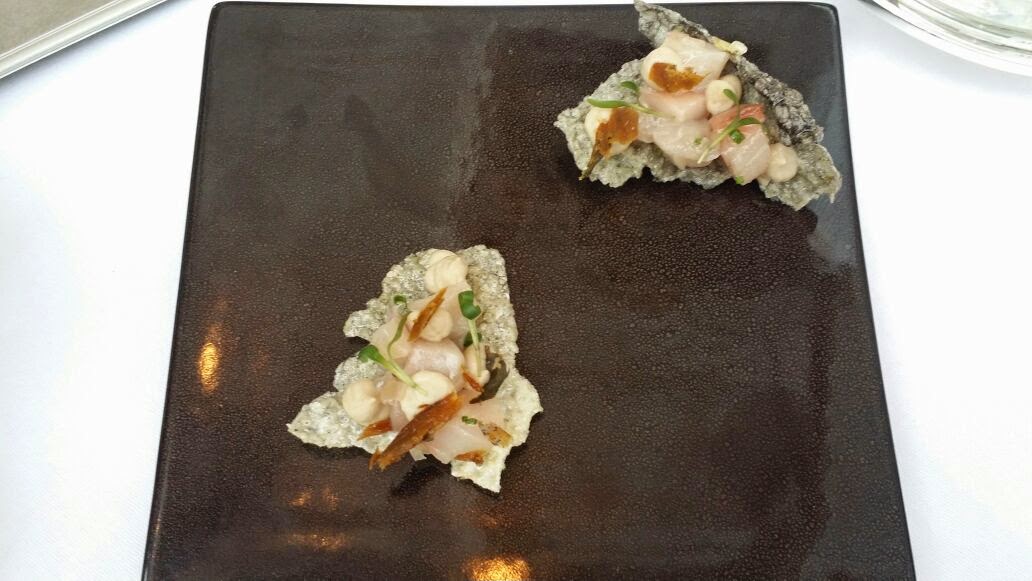 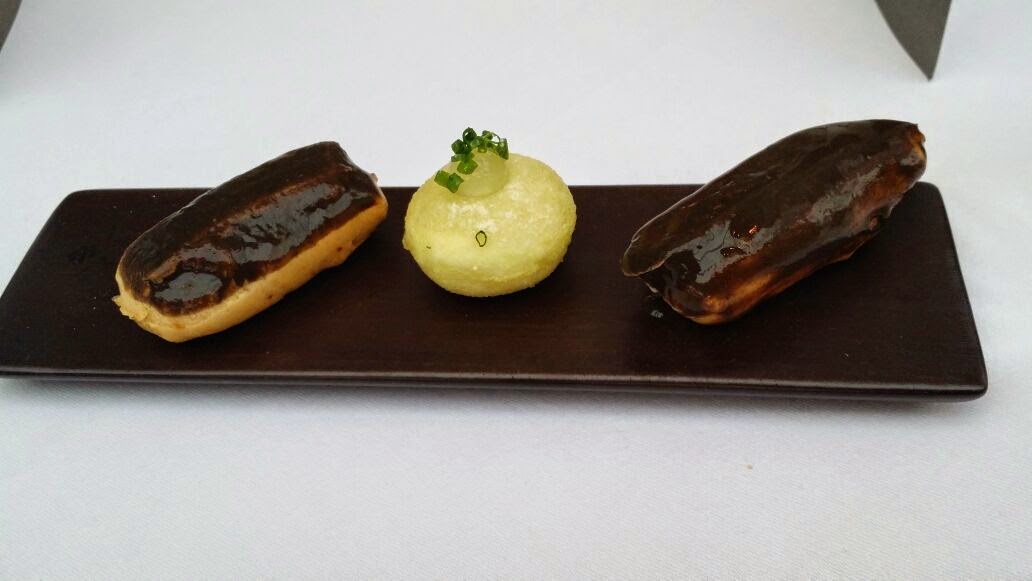 The first course was an attractive ring of smoked haddock and pickled onion with the centre filled with a grilled cheese foam at the table. 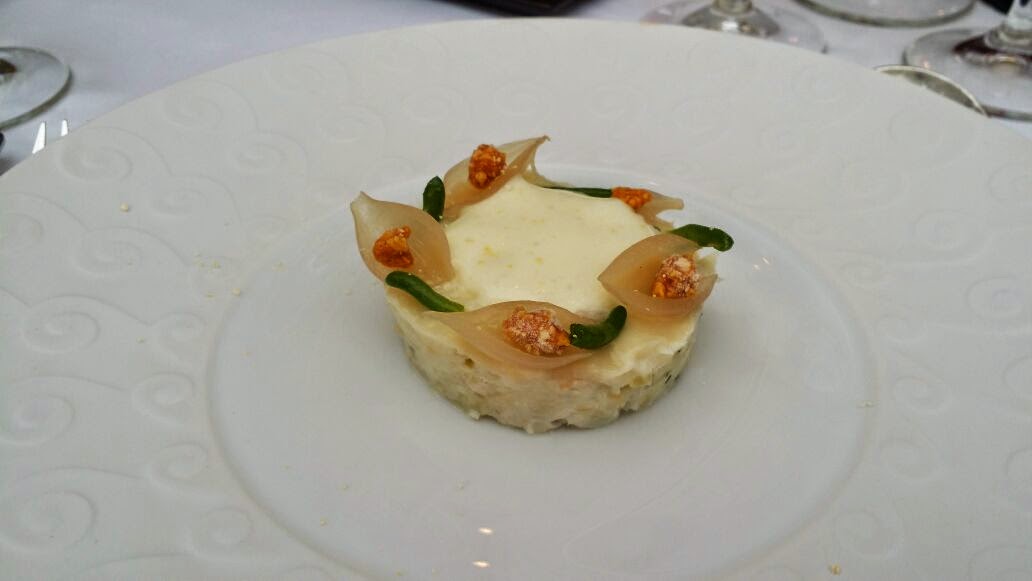 The next course of beetroot baked on open coals, quinoa, frozen goat’s cheese & mizuna was theatrical and prepared at the table. Interesting textures from the frozen but light goat’s cheese with the hot soft beetroot. 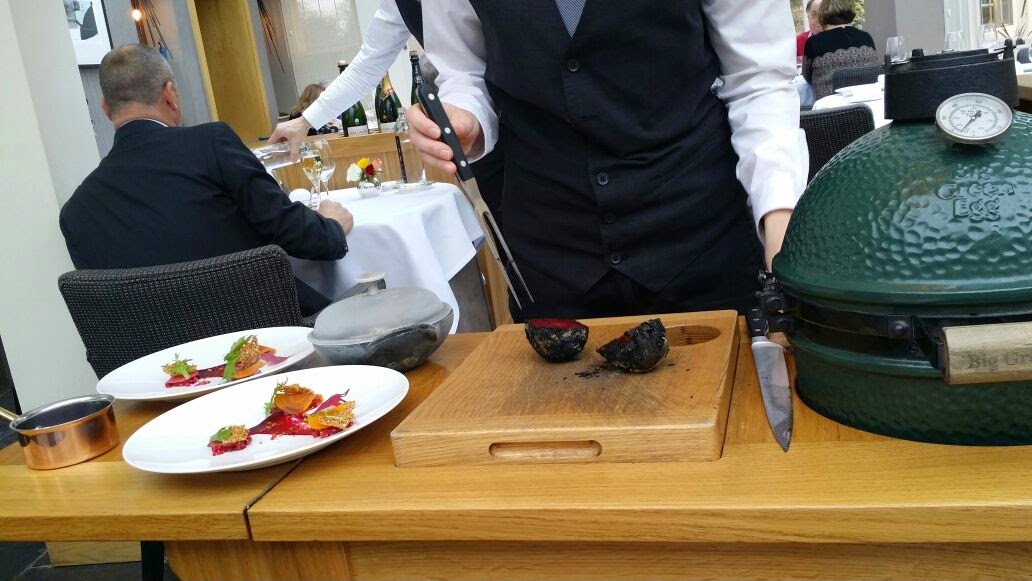 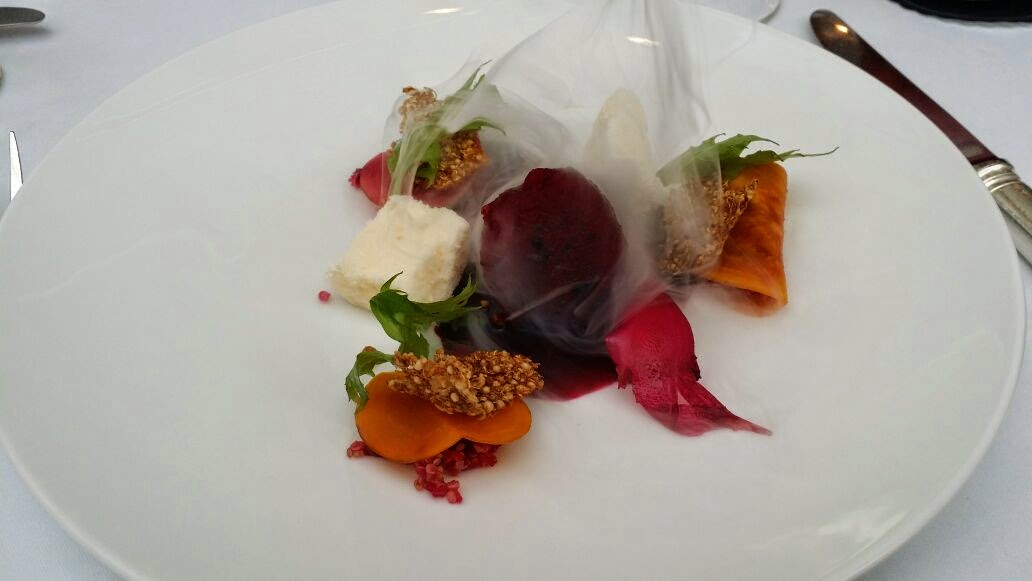 Suckling pig, turnip, buttermilk, Iberico ham, one of the highlights of the meal for me. 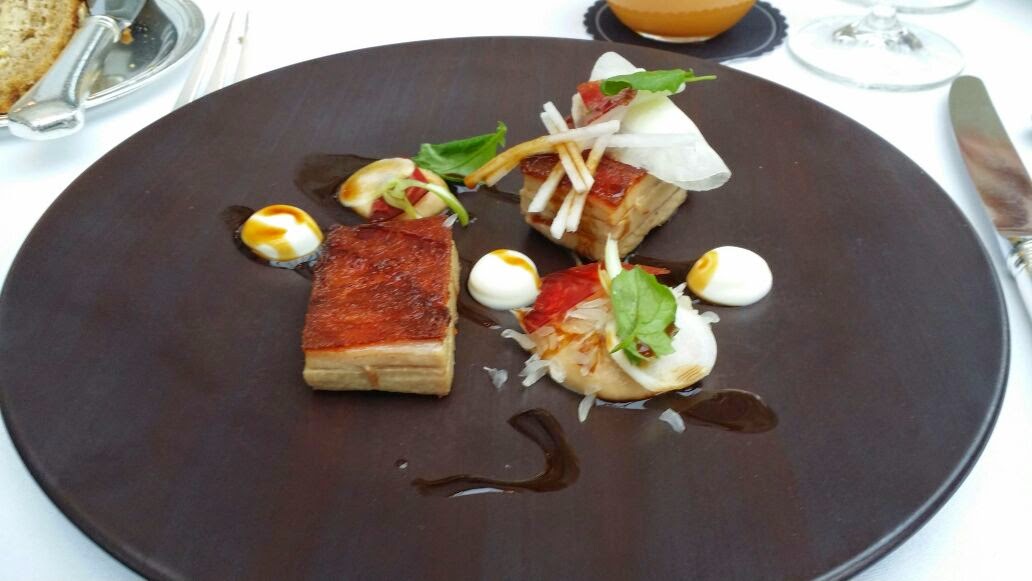 Roasted sea scallop, tartare, Jerusalem artichoke, black truffle. A selection of impressive truffles were paraded at the table before being shaved onto the dish. 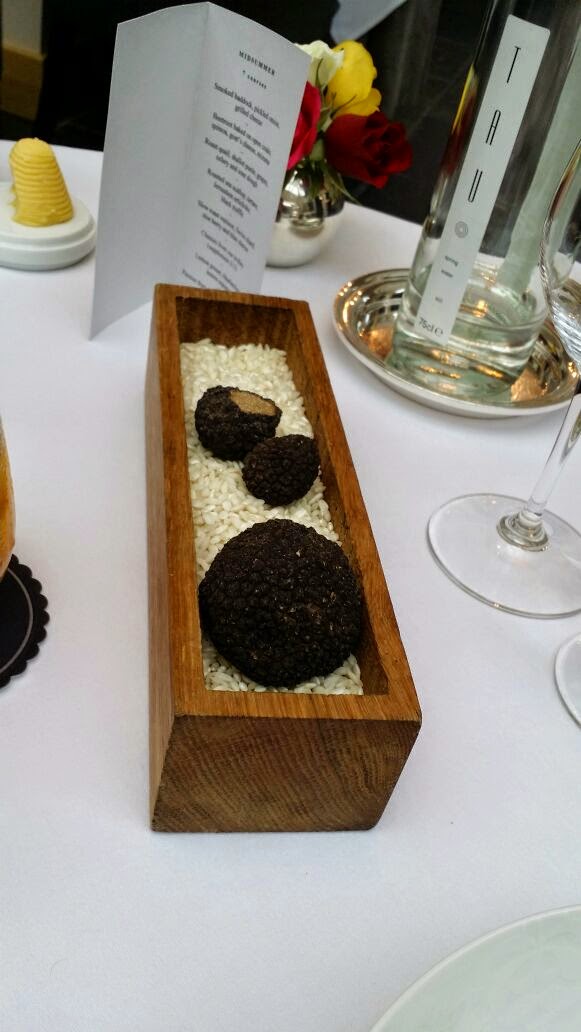 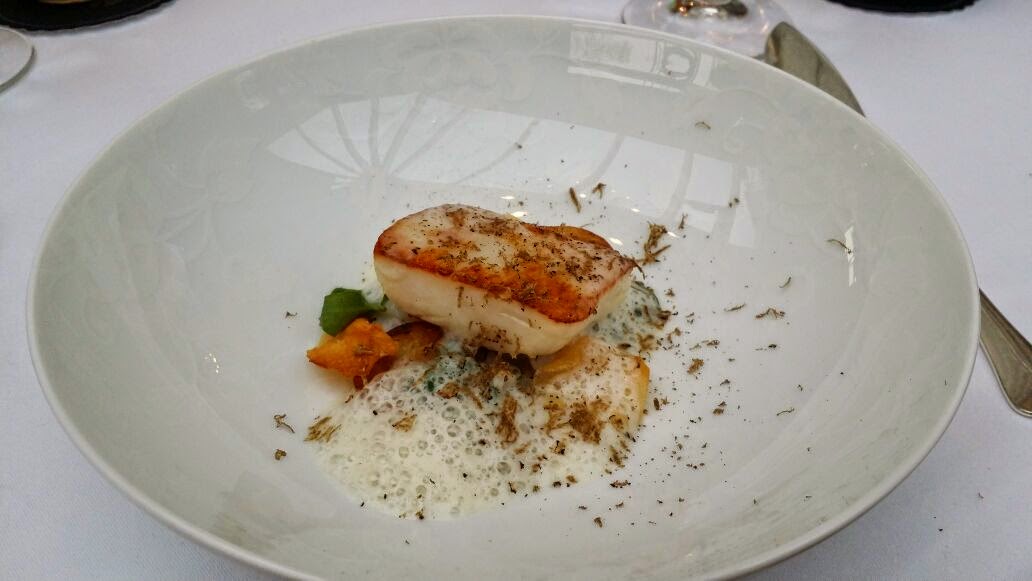 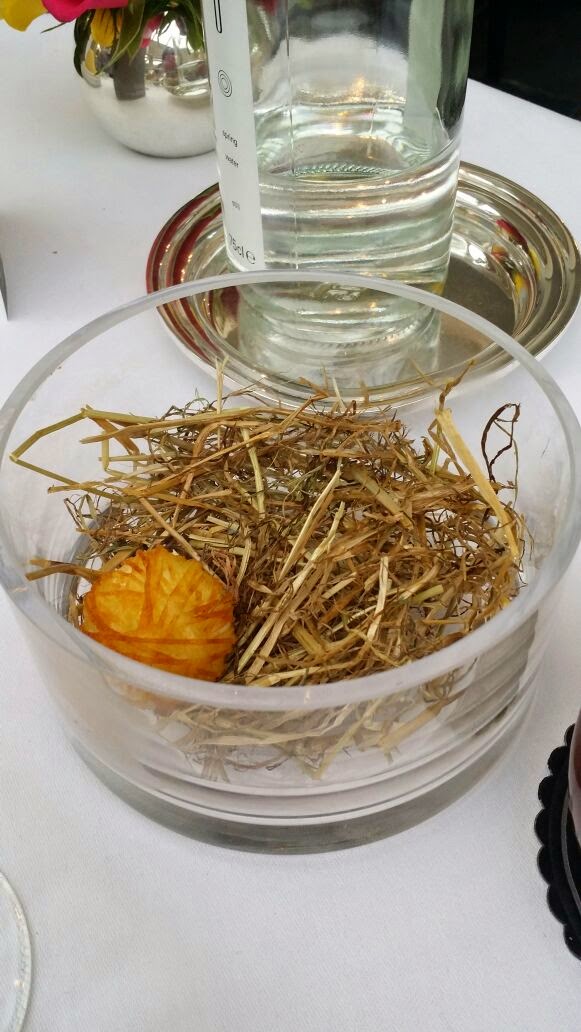 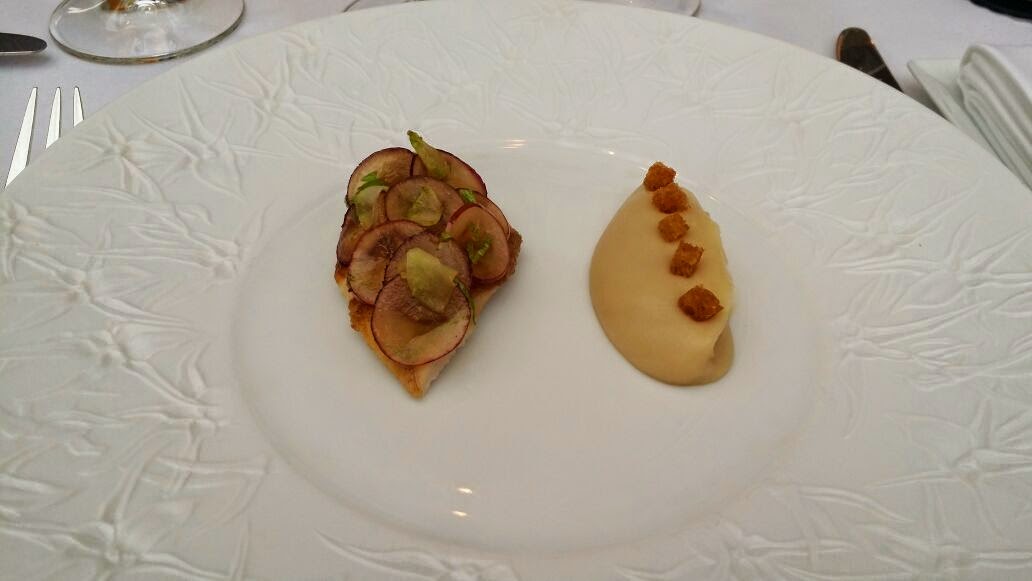 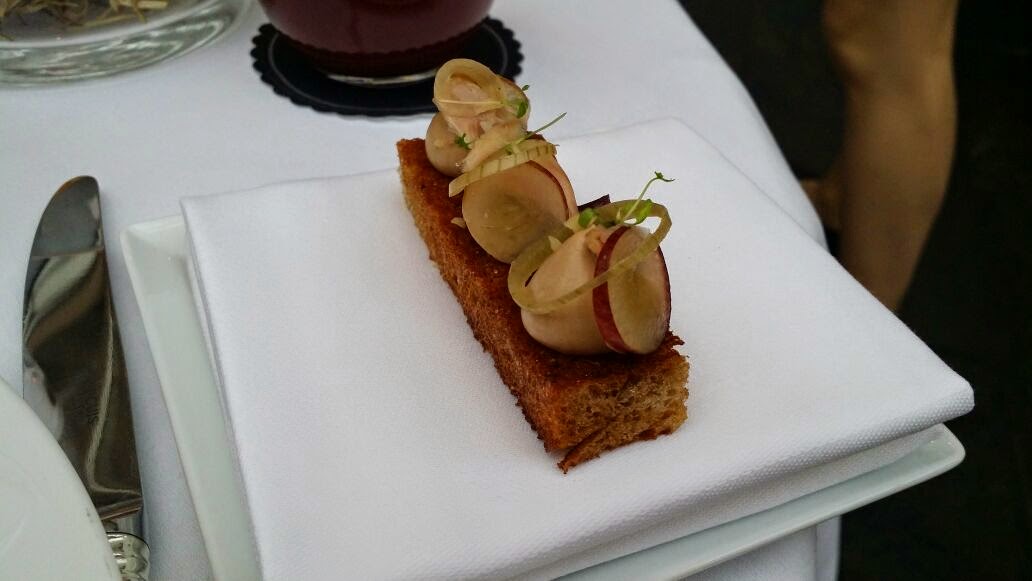 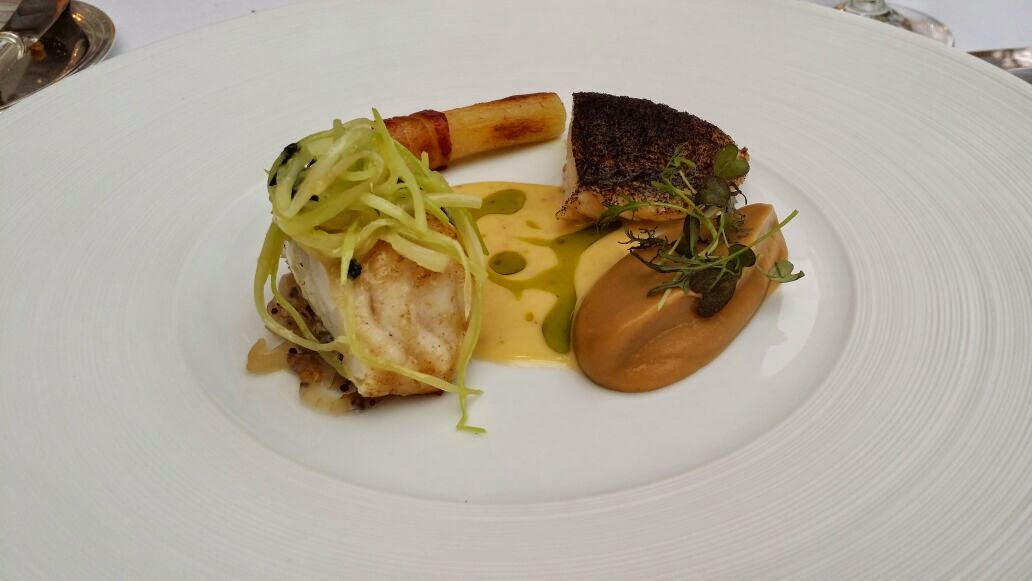 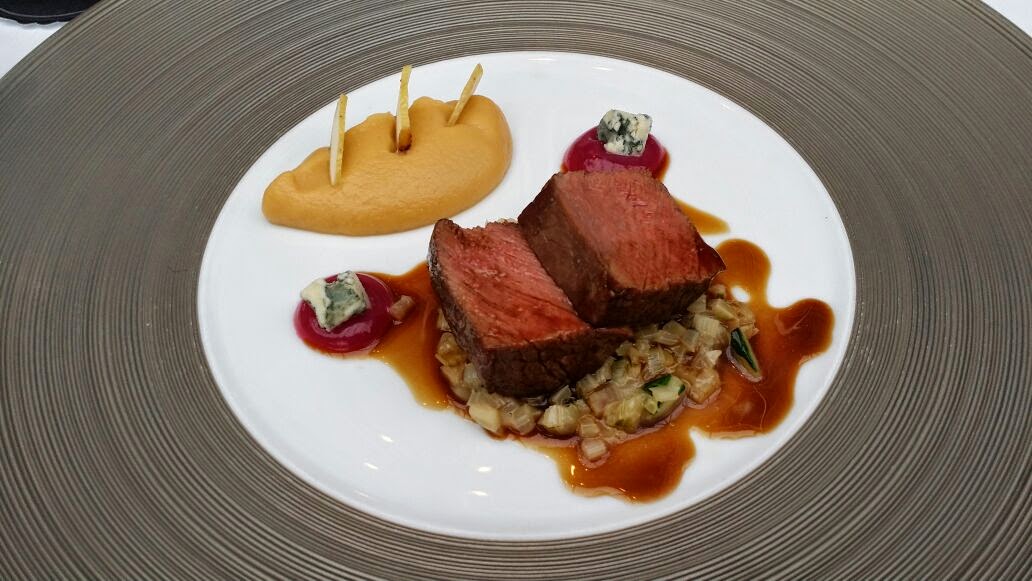 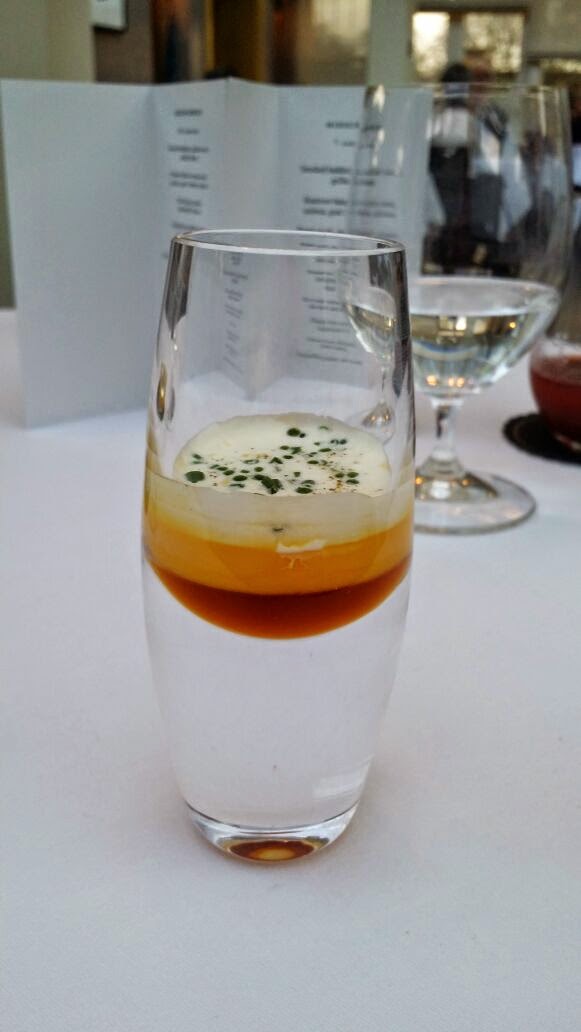 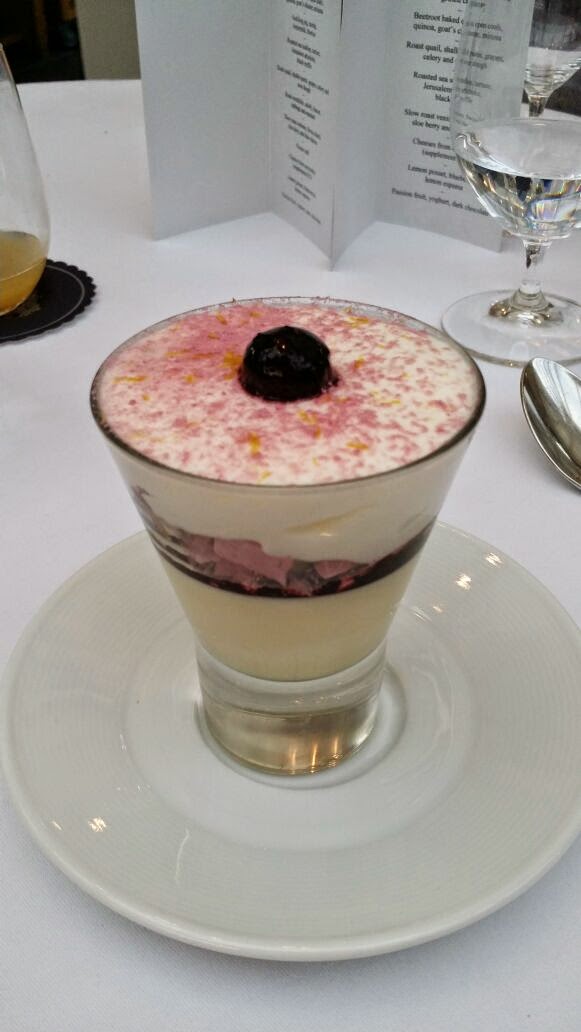 Passion fruit, yoghurt & dark chocolate, very rich but balanced up by the tart passion fruit.
Butter pastries with apple brandy crème anglais and caramel sauce. As if we needed more after the desserts the pastries were surprisingly light. 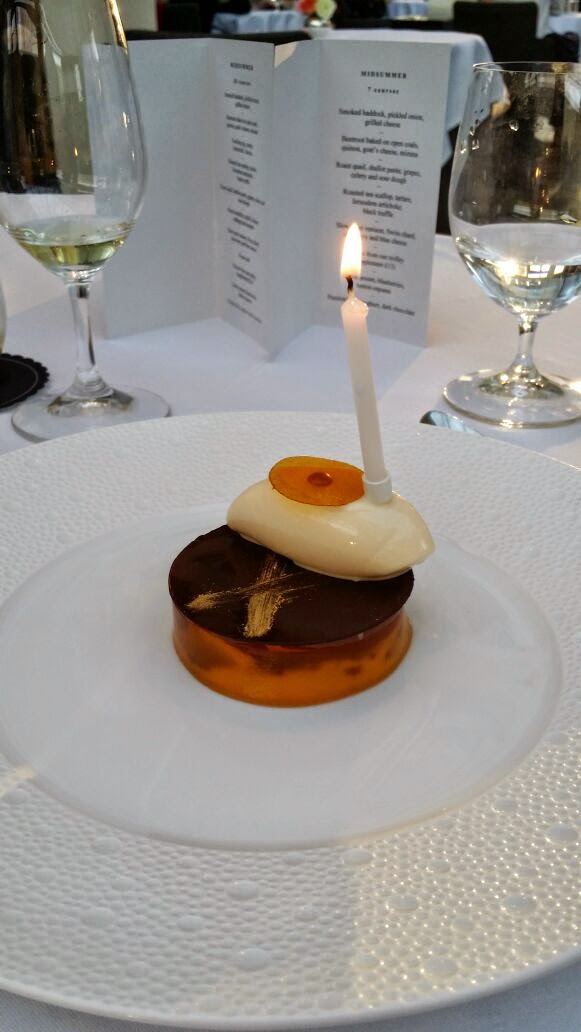 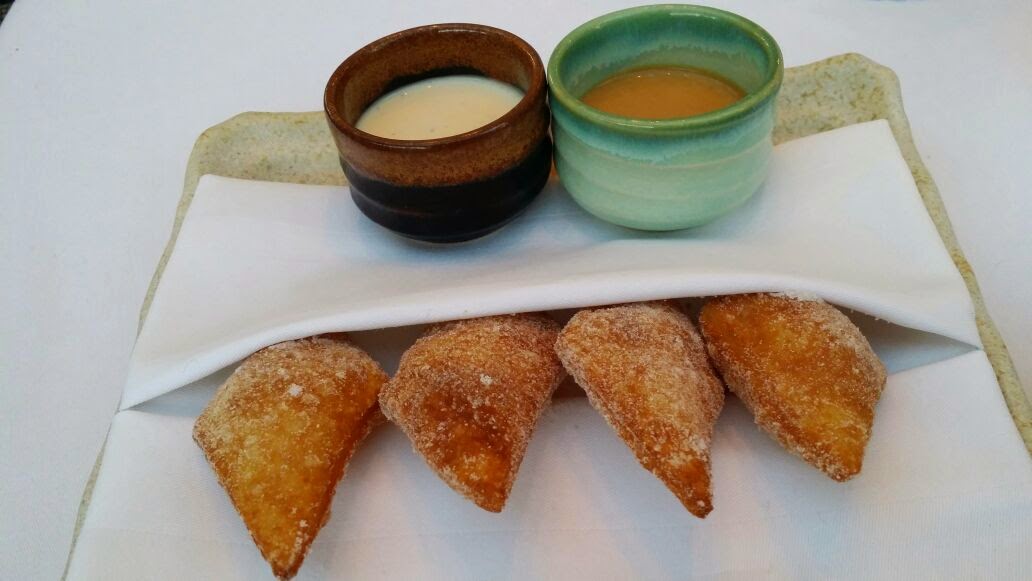 The consistency of the dishes was incredible, judged by the fact that our 10 and 7 course menus had different running orders and as I had dishes Mrs Nom had enjoyed prior to me were exactly the same despite the multiple components, the quail dish being the prime example. Although expected of course from a 2 star restaurant. Each of the courses was enjoyable and the journey through them all was very memorable. At £105 for the full 10 course menu it is not excessively priced for the quality. 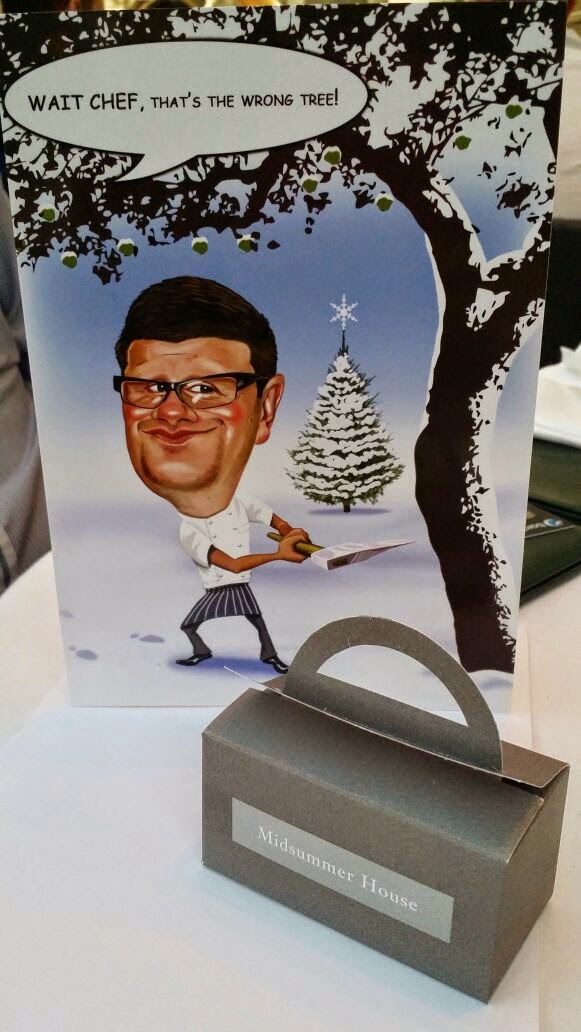 Daniel Clifford is a very hands on chef and we noticed when he walked past a couple of times to another kitchen or storage area in the garden separate from the main kitchen. Midsummer House is a special restaurant delivering top class food in a beautiful city.