Alain Ducasse at the Dorchester, London

Alain Ducasse at The Dorchester was my first 3 Michelin star experience. Set in Park Lane in the grand Dorchester Hotel where it was evident that the clientele enjoyed the finer things in life. The restaurant is accessed halfway down the long tea room; it felt a bit strange waltzing through the area past people enjoying lunch and afternoon tea to get to the restaurant. The dining room was larger than I expected, even with spaced out tables. The dining room is elegant and impressive, it is dominated by a centerpiece curtain of Swarovski crystals which surrounds a private dining table.

Alain Ducasse is a multiple holder of Michelin Stars, too many to count in fact and his trusted Executive Chef at the Dorchester is Jocelyn Herland who oversaw the restaurant when it achieved 3 Michelin stars in 2010. The standard has remained consistently high which has seen the restaurant keep all of its stars intact to date.

Our original plans were to sample to the lunch menu which priced at £55 for three courses, two glasses of wine and water seemed a snip. However our plans were soon blown out of the water when we were shown the menus. Given that this would likely be a one off visit for the foreseeable future we thought we may as well do it right and opted for the seven course tasting menu at £125 per head.

The first course was dorset crab with a delicate ‘gelée’ and caviar. Served in a shell this was a light start that served more as a palate cleanser as the flavours were subtle. The crab jelly was made with crab meat, shallots, fennel, ginger, coriander, chilli pepper, lemon grass, tomato, egg white put in water and set with jelly leaves of agar agar. 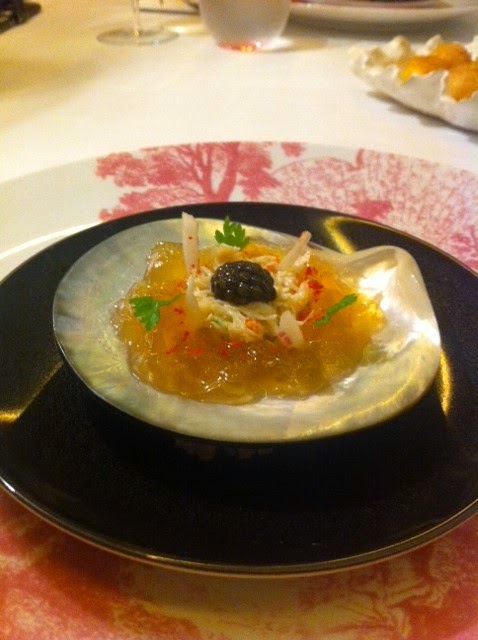 Prior to the first course we were presented with a mountain of warm cheese Gougères, choux pastry flavoured with paprika, black pepper and emmental cheese. Its a shame that we took so long deciding which menu to order that these had cooled down before we tried them. 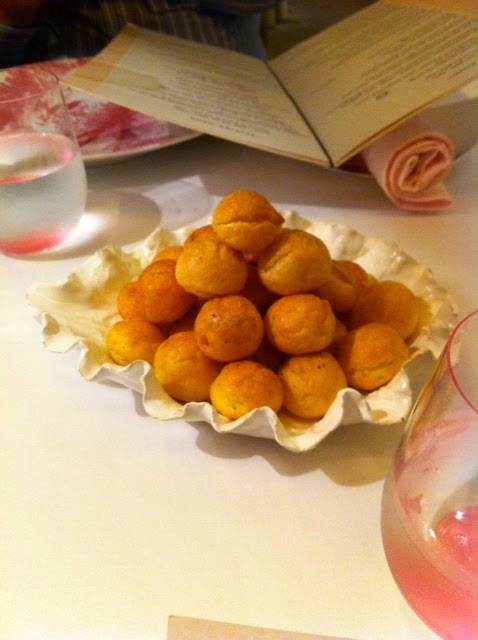 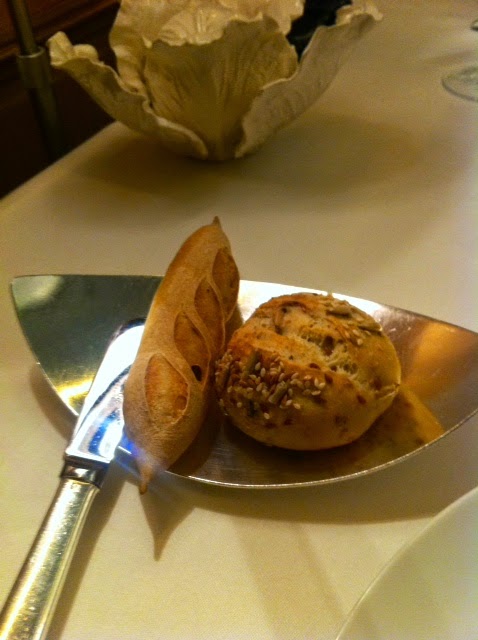 The next course was presented in a cookpot with puff pastry around the outer rim of the pot. Inside were spears of green asparagus from Luberon served on a bed of morels chicken stock and shallots, this was topped with Comté Grande Garde cru 2011 cheese and allowed to melt whilst being baked. It was sort of like a posh pie with the morels being particularly enjoyable and mopping up the cheese and sauce with the pastry. Since coming into season it was probably the fifth time I've had asparagus in the last couple of weeks. 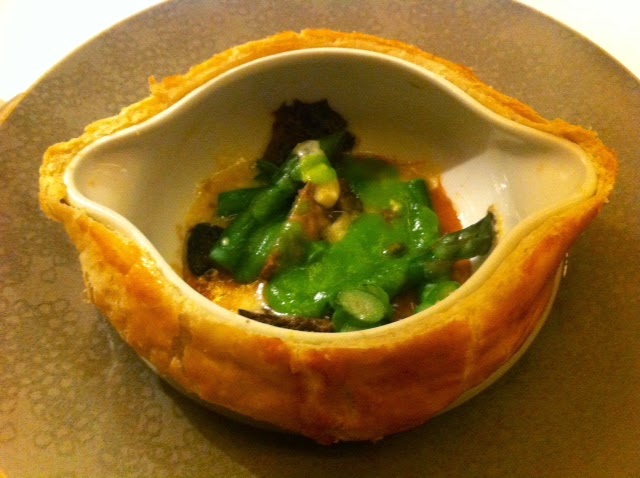 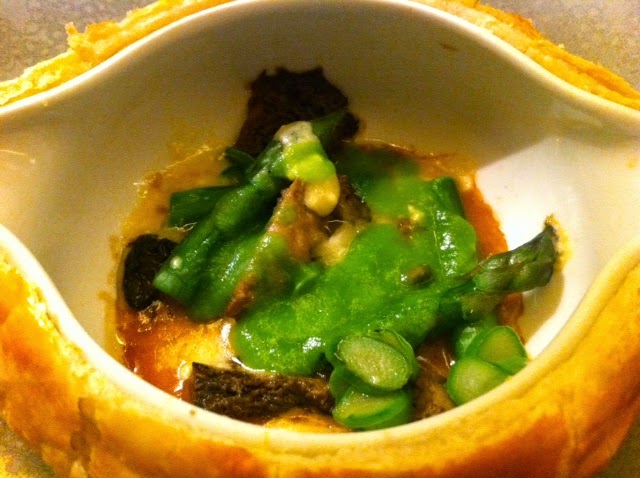 Next up was a signature Alain Ducasse dish, ‘Sauté gourmand’ of lobster with truffled chicken quenelles. The native lobster was first poached in a bouillon then cooked in clarified lobster butter and sliced into medallions. Served with poached quenelles of chicken mousse with black Perigord truffle, semi dried pasta made with semolina flour and finished with a homardine sauce and finished with a creamed chicken sauce. This was a dish of luxury and the flavours just worked together with the homardine sauce being the star binding it all, although I would have preferred the lobster to be softer as it carried some bite. 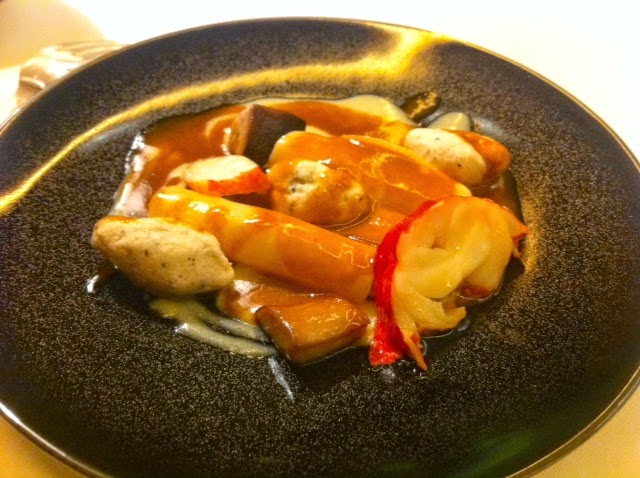 Wild seabass, corgette flower stuffed with basil mousse and confit tomatoes. The accompanying sauce poured at the table was a wonderful bouillabaisse reduction. The courgette and basil mousse cut through the richness of the dish and the fish was superbly cooked as expected. 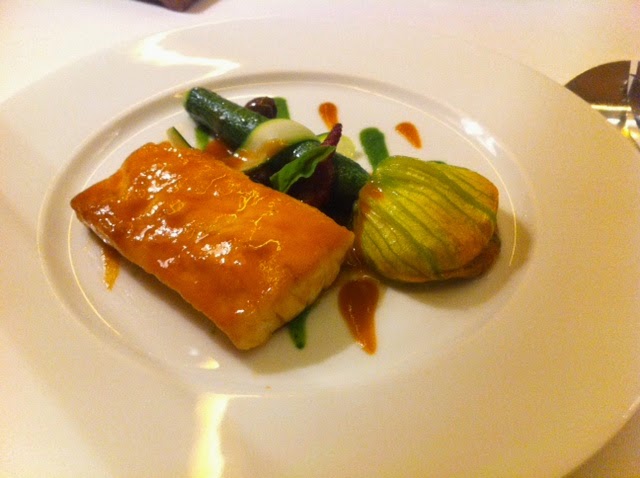 Farm house veal loin, peas ‘à la française’, served with a veal jus. The veal was recommended to be served medium rare but it was just a touch over for me, with it nearing medium rather than rare. By now I was beginning to flag with the richness of the sauces and struggled to finish the dish. The classic French peas were a good accompaniment with the naturalness shining through, a salty piece of pancetta cut through this to give it balance. 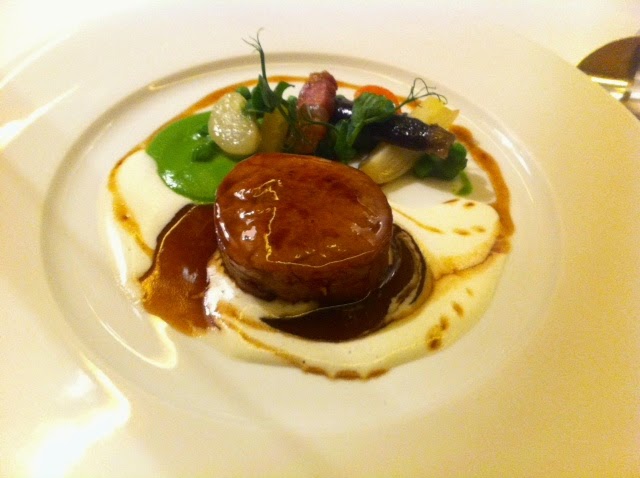 The cheese course was next which I was dreading after the richness of the previous courses. A beautiful arrangement of four French cheeses with condiments was presented, served with a simple salad to refresh the palate, crackers and country bread. From left to right below we had a Valençay goats cheese with bell pepper, camembert served with an apple and cider marmalade, Gruyere Grand Jura (18 months) served with mushrooms, yellow wine and macadamia nuts and Persillé du Malezieu served with poached pear in mostarda di cremona. The portion was rather generous and it took me half an hour to finish! 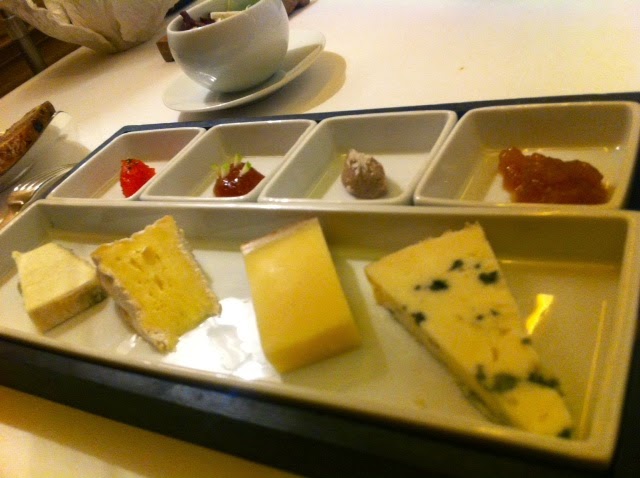 The dessert course of exotic fruits was a bit odd I thought when first reading through the menu. I wondered why a chocolate or pastry based dessert was not included and now I knew why after the first six courses, it would simply be too much. My chocolate and sweet cravings were met with a medley of sweet snacks before dessert. The highlight for me being the macaroons.

The dessert was billed as exotic fruit contemporary vacherin. Served in an unusual clear cylindrical dish with matching lid the sorbet inside seemed enticing to lighten the heaviness I was feeling. The dessert was made up of a mango jam at the bottom topped with a scoop of mango & passion fruit sorbet and a scoop of pineapple and topped with coconut meringue. A medley of perfectly diced fruits including kiwi, pomegranate and a variety of melon with lemon grace and passion fruit juice was spooned over the top at the table to complete the dessert. The mango and passion fruit sorbet reminded of a Solero from my youth but I think being grown up now I would prefer this to cool me down during hot summer days! 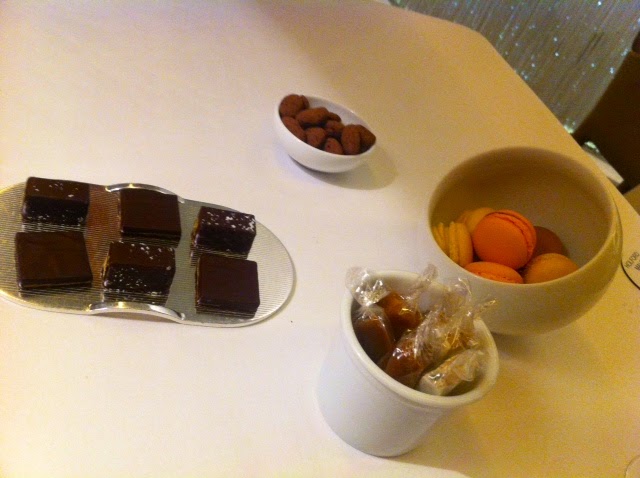 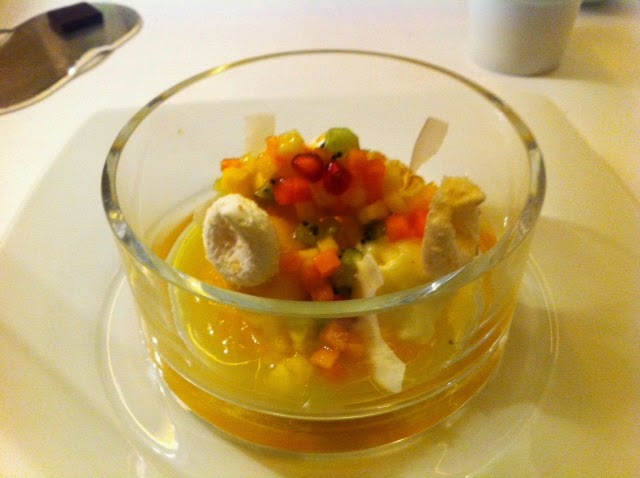 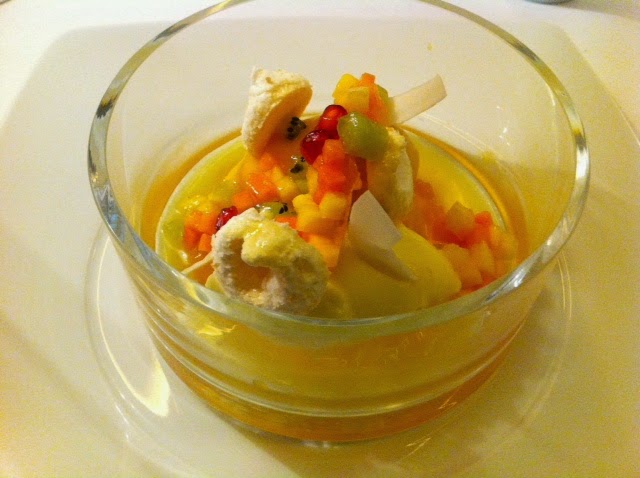 The service as expected in a 3 star restaurant was exemplary, with smooth and impeccable timing. Although as we were one of the last tables to finish and the fact that we took a while on the cheese course the service slowed towards the end. Dishes were served by one member of the team at any one time and not by an army of people which I find particularly annoying. The whole experience overall was very enjoyable and certainly introduced me to French gastronomy in ways I have never experienced before.