I chose The Dairy as the first restaurant of my recent birthday weekend in London, because one birthday meal is just not enough! Situated in SW4 in Clapham which is somewhat out the way of the action of central London but within an easy half an hour tube ride. It amazes me that Londoners in general seem to share a common trait which is that travelling even to the next postcode is a mammoth effort! The Dairy is literally a minute from Clapham Common underground station and features a bar area with a narrow dining room. 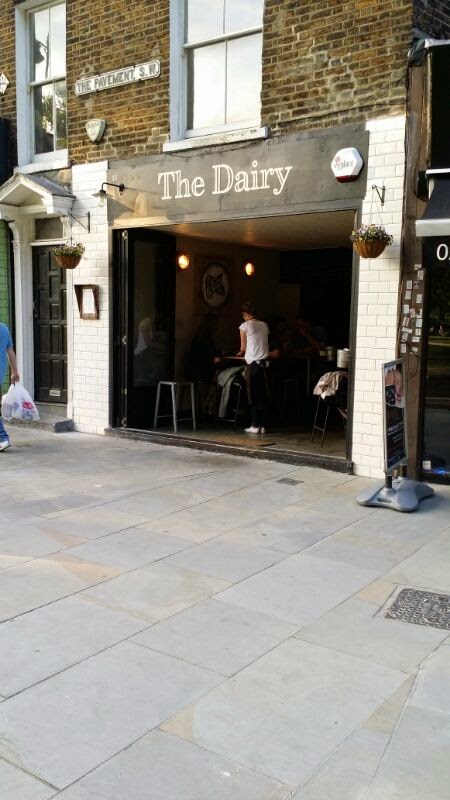 Whilst deciding whether to order as many dishes from the menu as possible which was split between snacks, garden, sea, land and sweet or the 7 course tasting menu we were presented with an amuse of potato. Not the most exciting as I had seen blogs with crispy oysters but the hot from the oven sourdough bread that followed with smoked bone marrow more than made up for it. 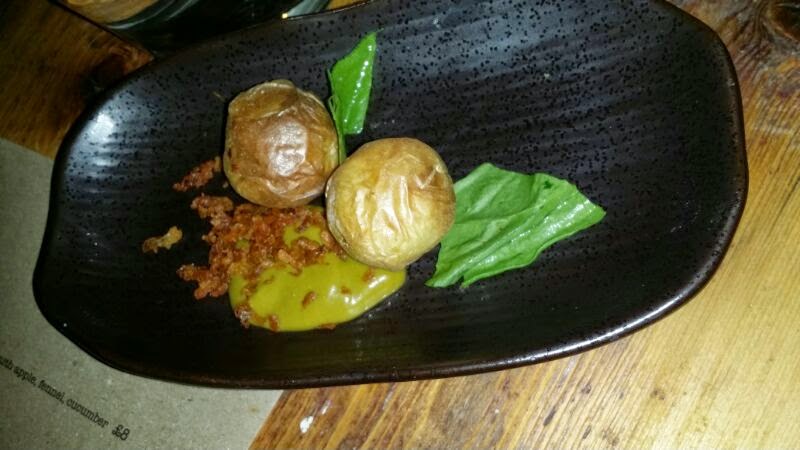 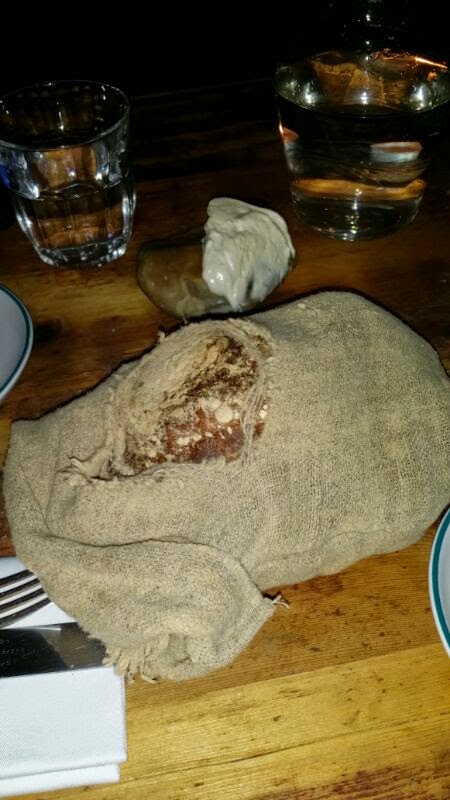 We settled on the a la carte as we were informed that we could order the eel from the tasting menu as a separate dish as they had plentiful supply that evening. The first snack was chicken liver mousse, rhubarb, fresh apple. A light mousse jazzed up by the rhubarb and apple. 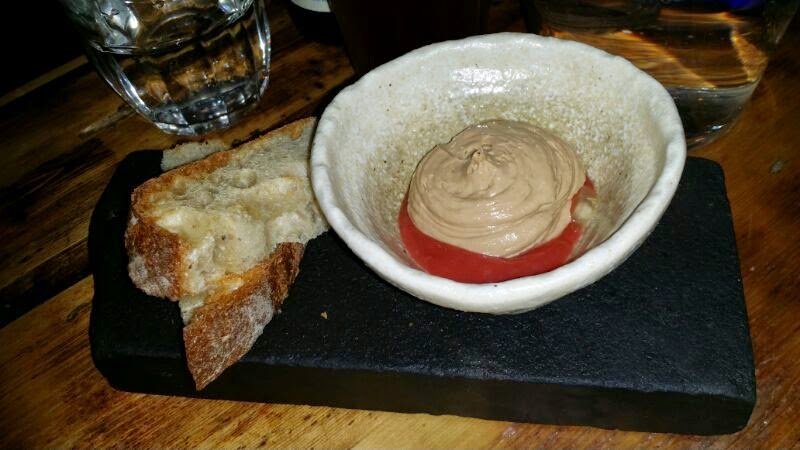 Squid, fresh fennel, red pepper tea, probably the only disappointment of the night. Small strips of squid with a red pepper tea that just didn't agree with me. 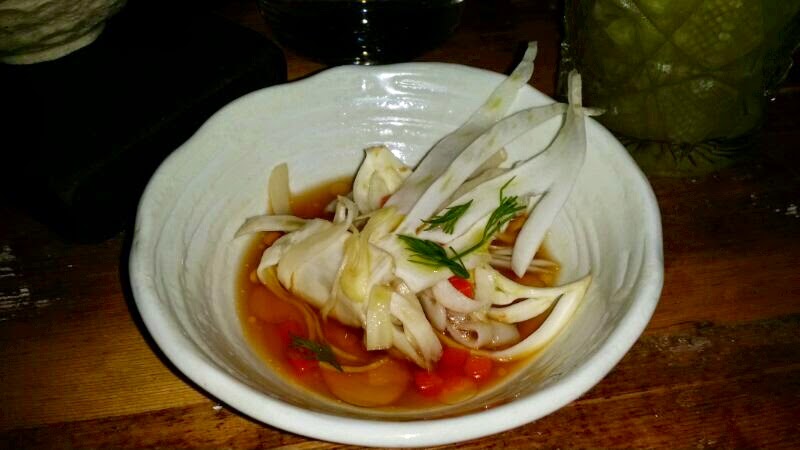 Roof top carrots, goats cheese, oat granola, buttermilk. The carrots were fresh and prepared in different ways which made them interesting. The goats cheese and buttermilk were a little rich. 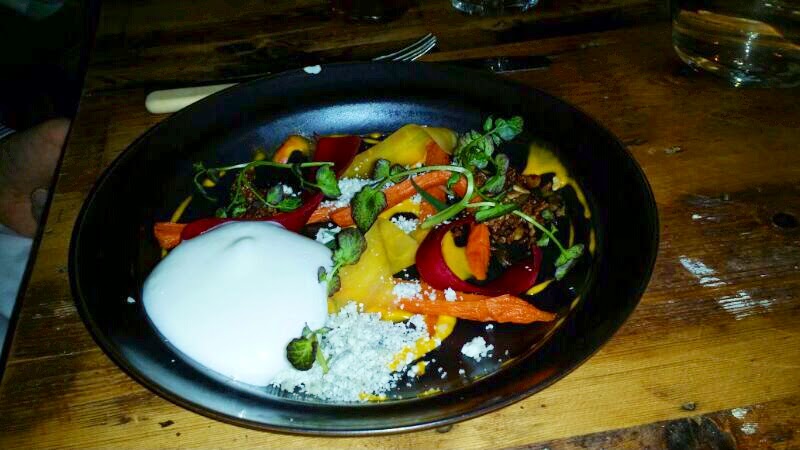 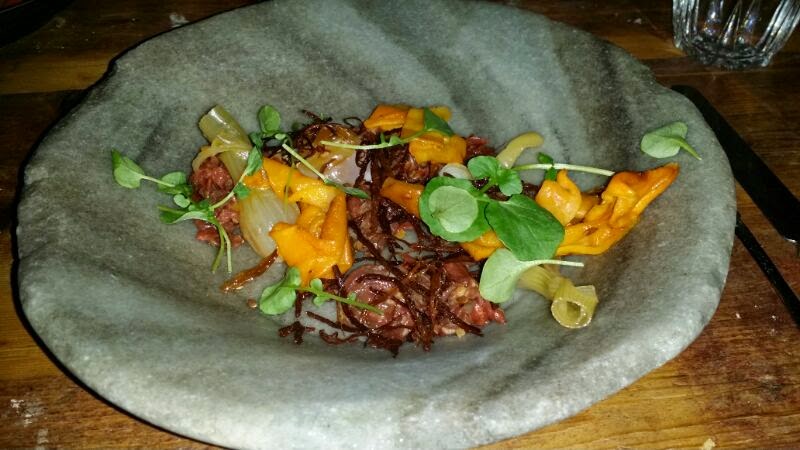 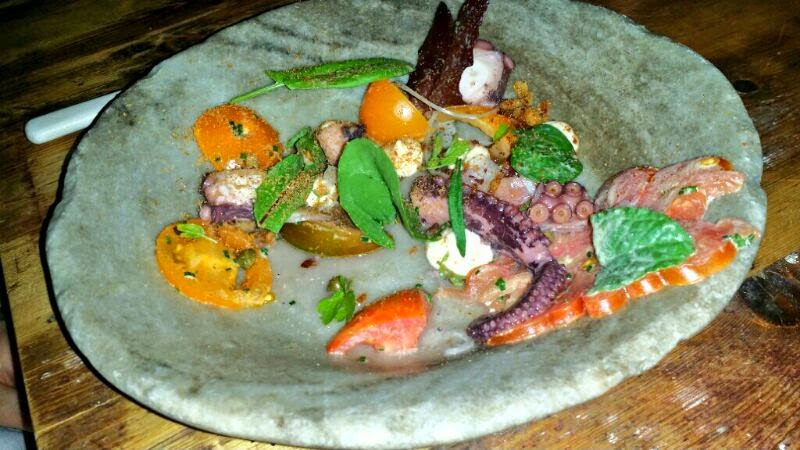 Applewood smoked eel, swiss chard, bonito butter. The eel was smoked to perfection and just right,  the dish of the night! 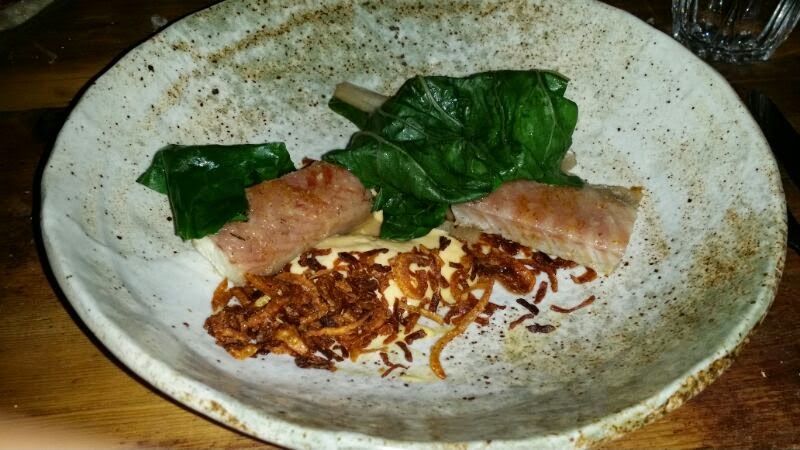 Chicken oyster, crispy skin, wild mushrooms, English asparagus. This ran the eel dish close for being my favourite if only it wasn't so salty. The chicken skin is a guilty pleasure and the chicken oyster was so moist. Coupled with the oyster mushrooms and asparagus this made for an excellent dish. Its not often that we order chicken dishes but this was an exception. 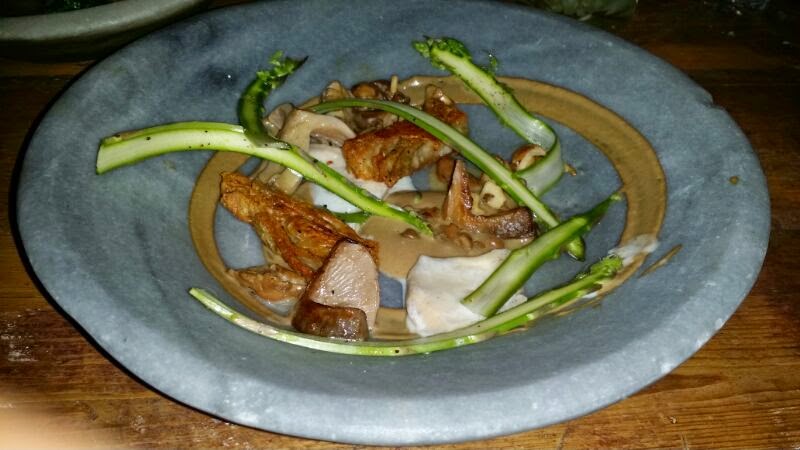 Lake District lamb rump, broccoli, anchovy, capers. Not as impressive as the chicken dish but the broccoli with the well judged pink lamb worked nicely together. 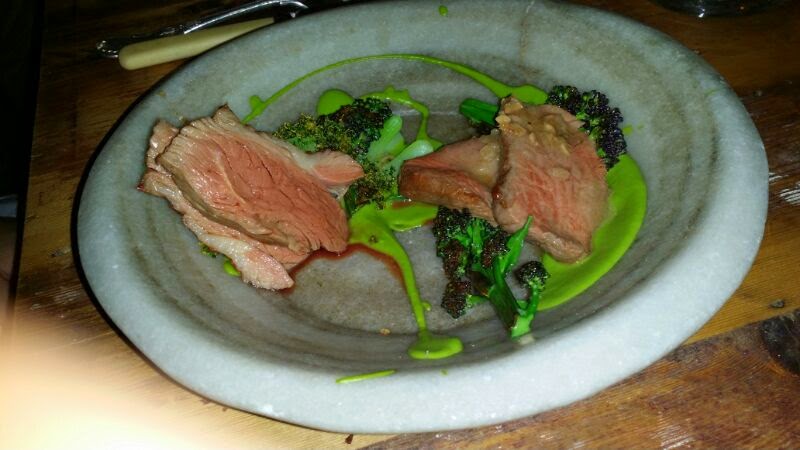 Salted caramel, cacao, malted barley ice cream. Mrs Nom had called up the restaurant beforehand and this was a nice surprise. We were very full by this point and struggled to fit anymore in so decided to share this, a good sweet end to the meal followed by some light petit fours. 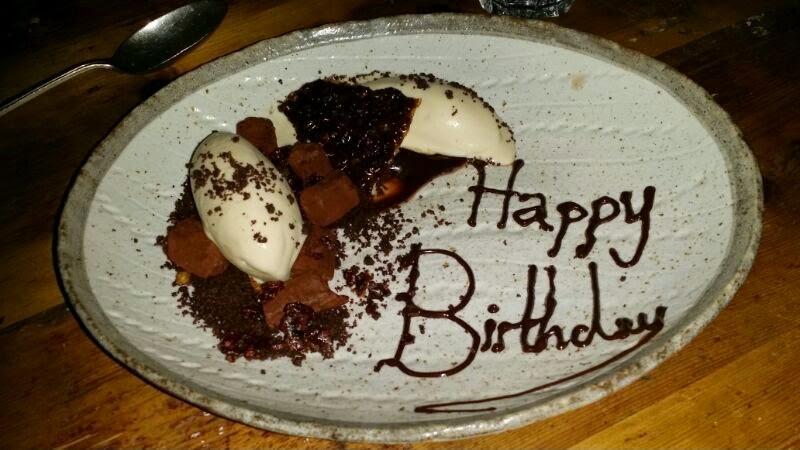 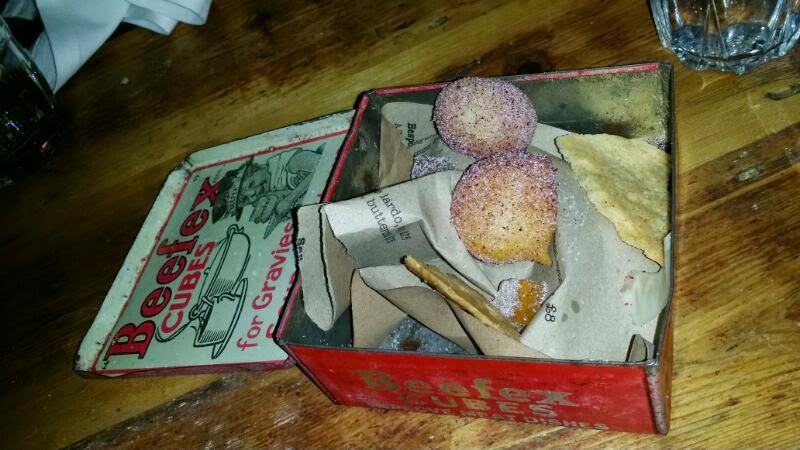 If only the neighbourhood restaurants around me back at home were this good, I would never have to venture to town! An enjoyable meal and it felt like we ate our way through the whole menu at a reasonable price with the dishes ranging from £5-£10. 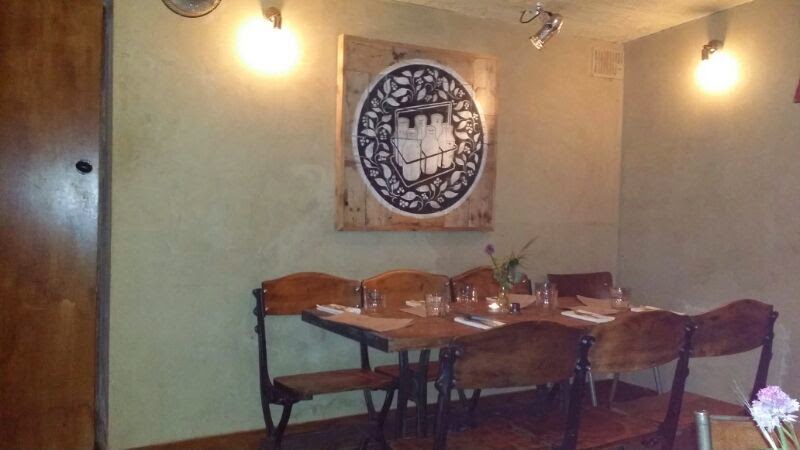 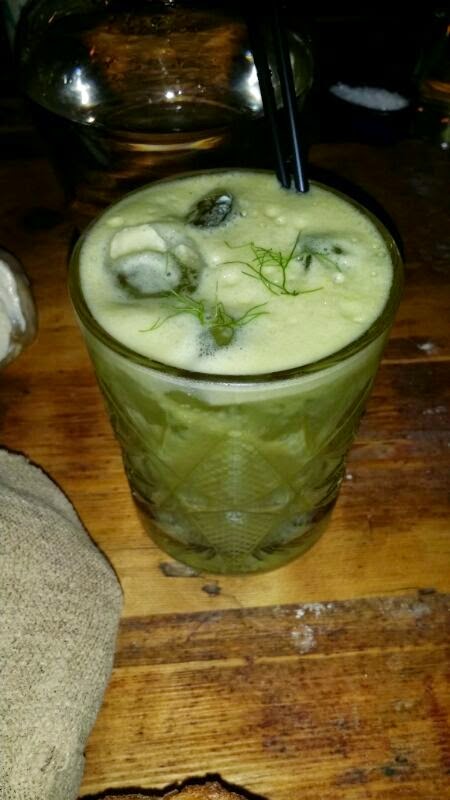