In a rare outing for Indian cuisine we were torn between Michelin starred Trishna and its newer sibling, Gymkhana, which was recently crowned the restaurant of the year at the National Restaurant Awards, sitting at the summit of the top 100 list. It was this that swayed us to Mayfair based Gymkhana despite us initially preferring the seafood heavy Trishna menu. I thought booking at relatively short notice would be a problem but luckily we managed to get a table for lunch at midday which fit in ideally with our plans.

Gymkhana serves contemporary Indian cuisine using seasonal British ingredients, with a strong focus in the tandoori oven and sharing dishes.  The interior of Gymkhana is dominated by dark wooden panels, hunting trophies and ceiling fans in references to British Raj India. There is a an array of interesting cocktails on offer using exotic fruits and spices but being relatively early we stuck to old favourites, alphonso mango lassi topped with pistachio and a sweet lassi. 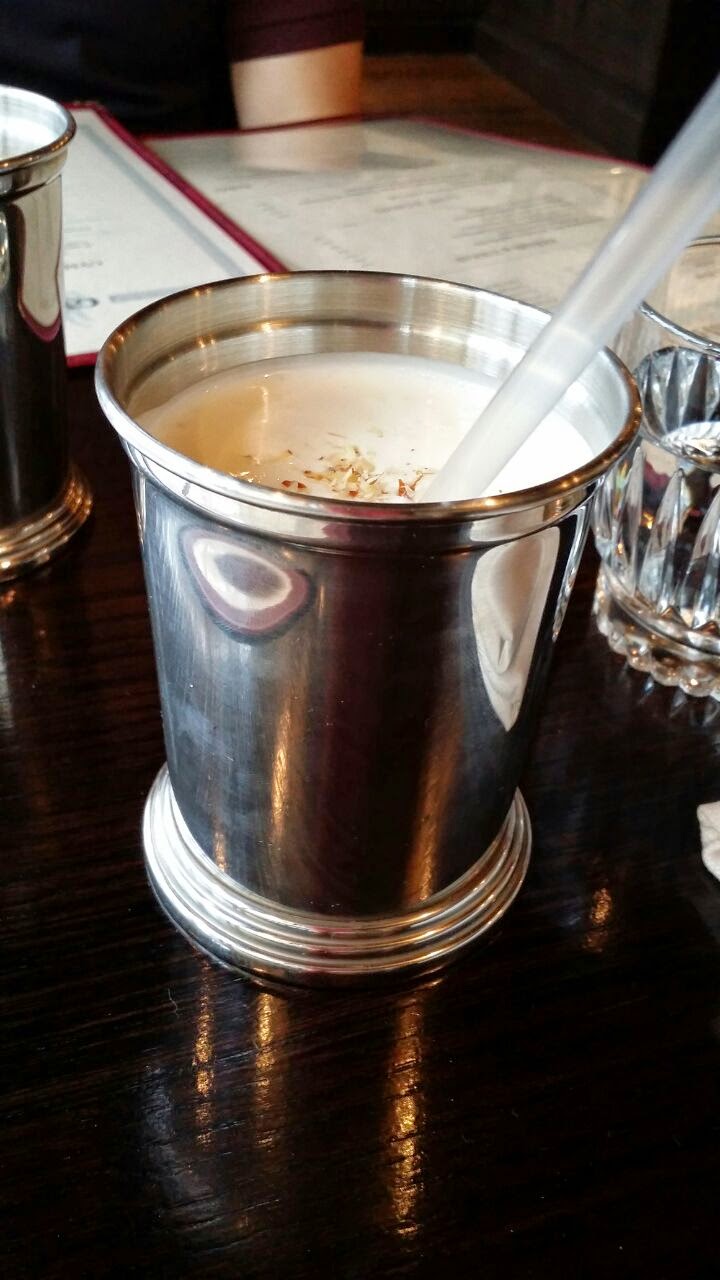 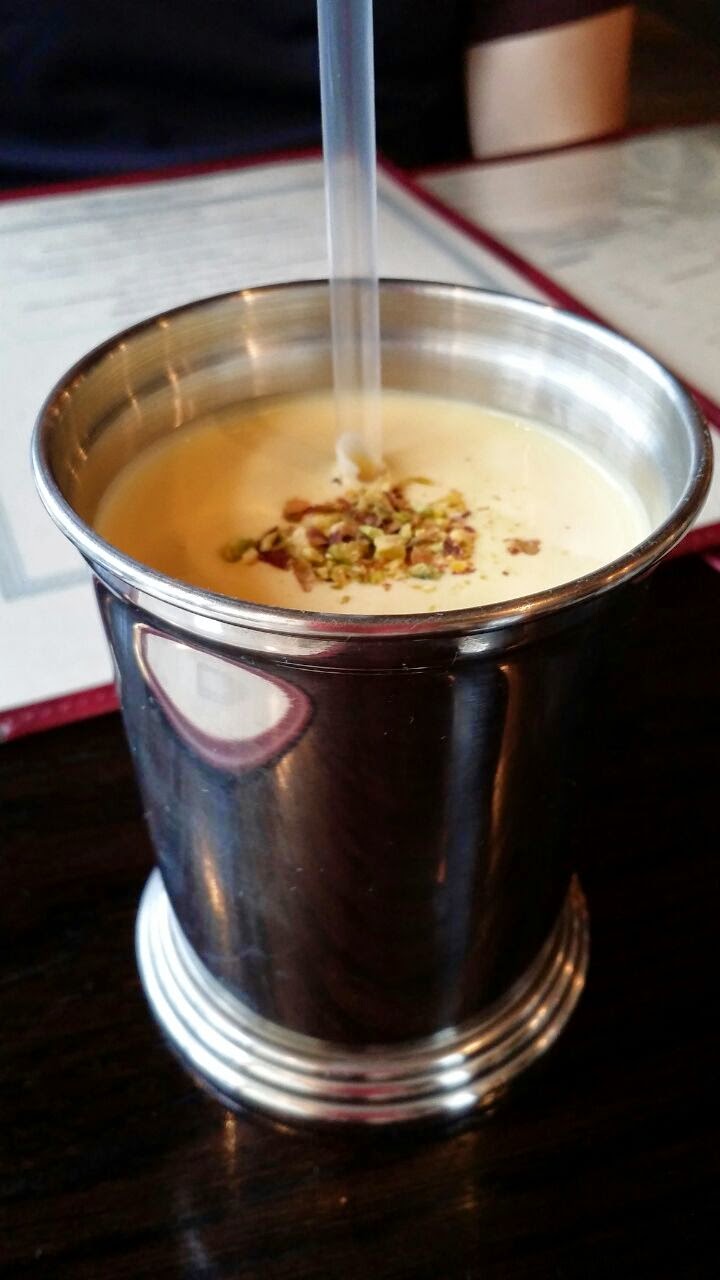 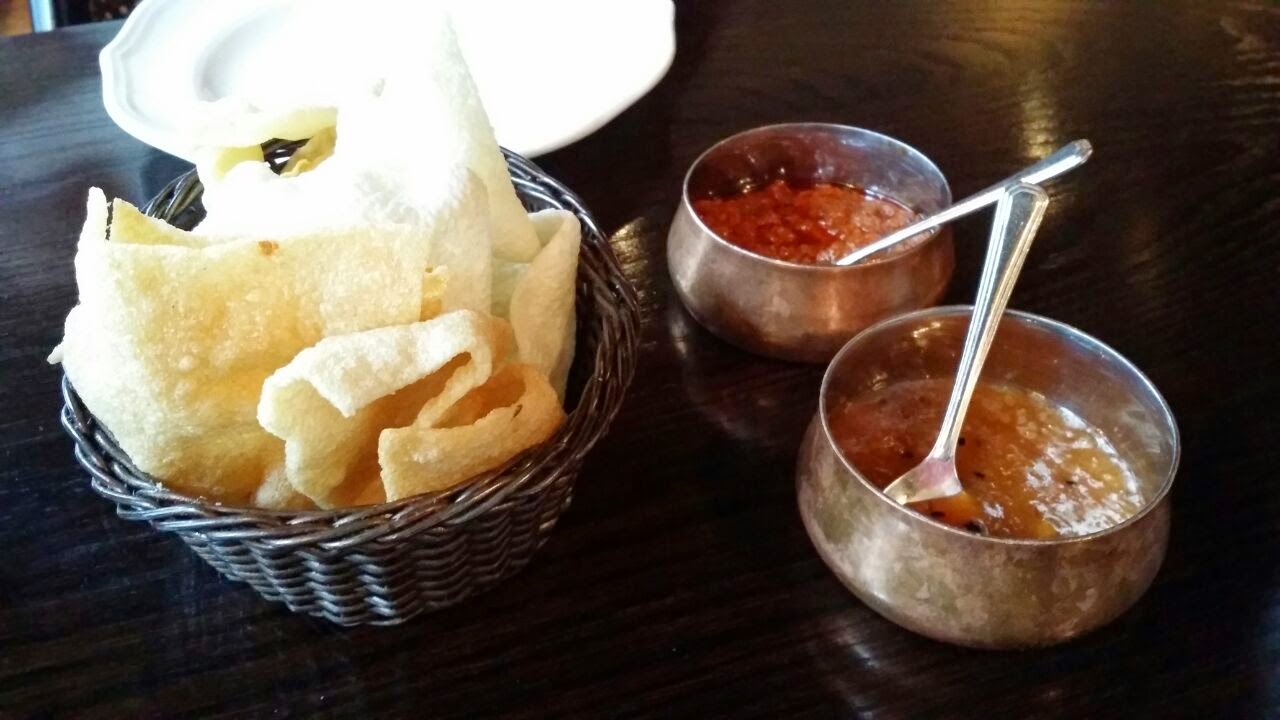 The starters arrived soon after and I was glad I made the decision to skip breakfast when I saw the portion sizes. We chose duck egg bhurji with lobster and malabar paratha and a dosa with chettinad duck & coconut chutney. The duck egg bhugji was a rich creamy scrambled egg littered with small lobster pieces which we mopped up with the extremely good malabar paratha bread. The duck with and coconut chutney was well spiced and fragrant but the dosa let it down slightly by being too oily. 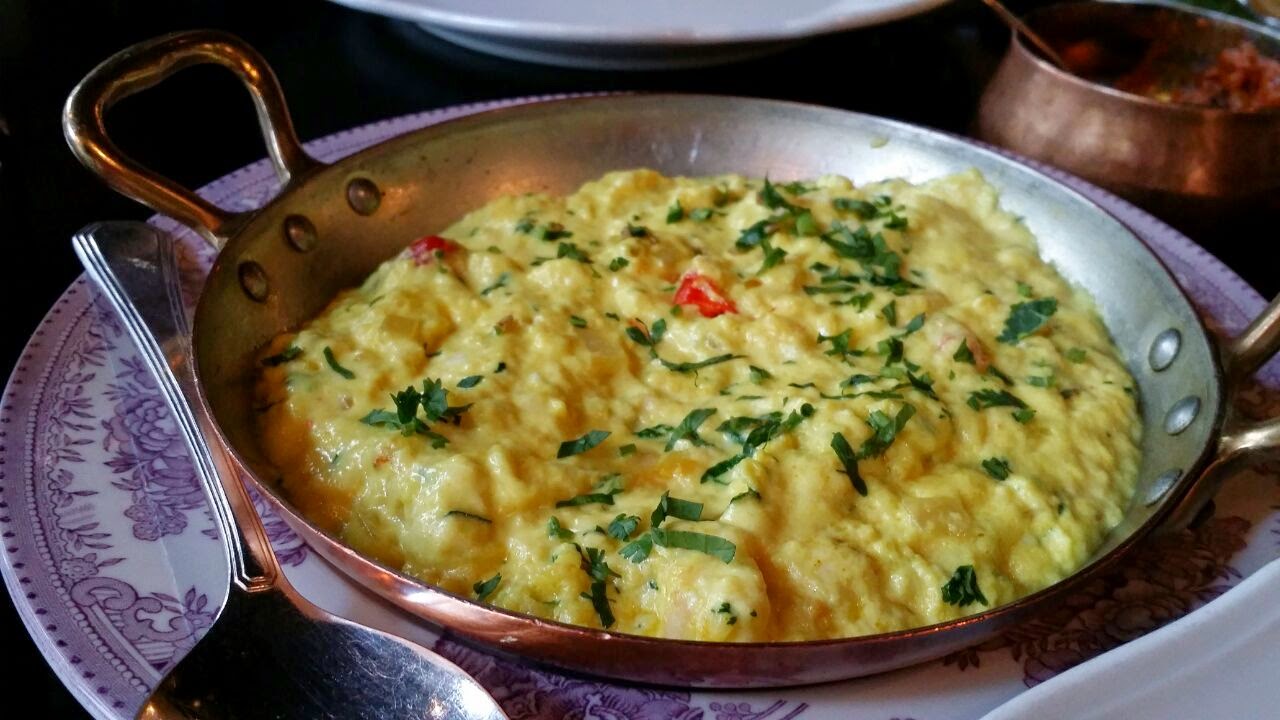 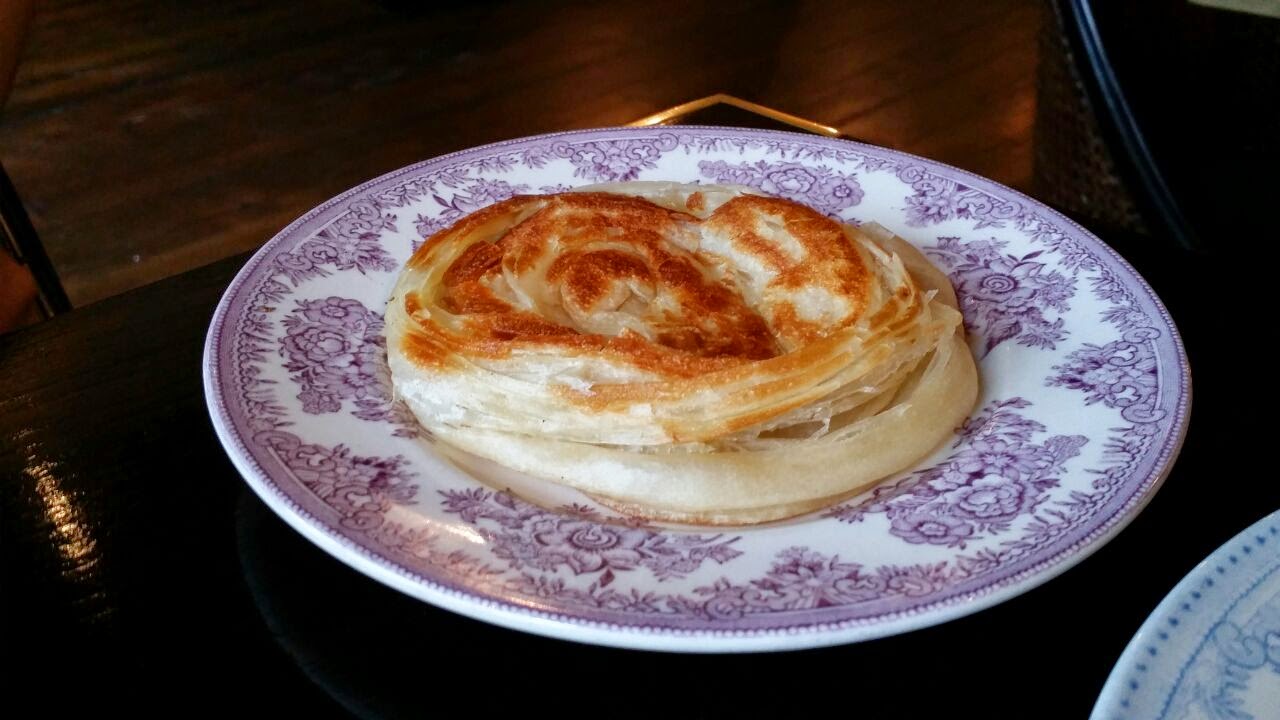 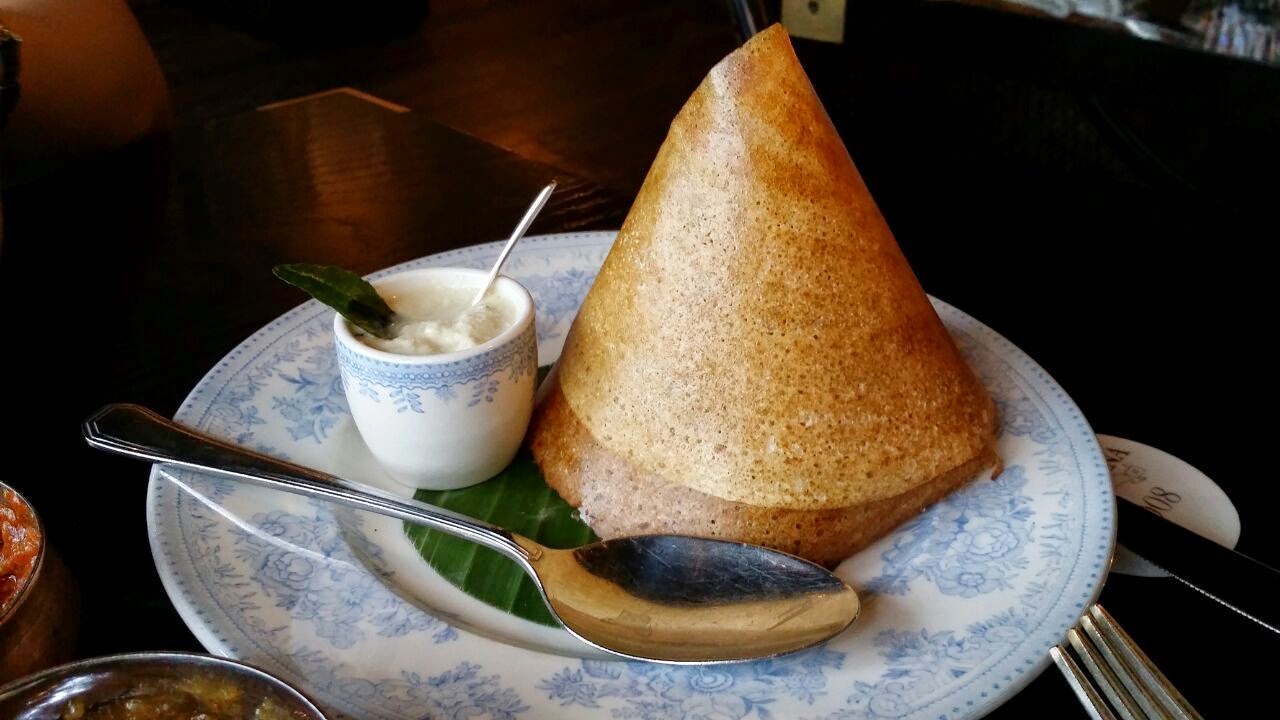 After a short break the mains and sides arrived and kept on arriving, the whole table was soon filled with food and we both declared we’re never going to finish it all simultaneously! There was one dish that was an automatic choice being the kid goat methi keema with salli, pao and additional bheja (brains). The mince kid goat was given an added richness by the brain and it was recommended to be eating in the pao (sweet bread roll) sort of like a slider. I actually preferred to eat the kid goat with rice as I felt it was a little dry in the pao. 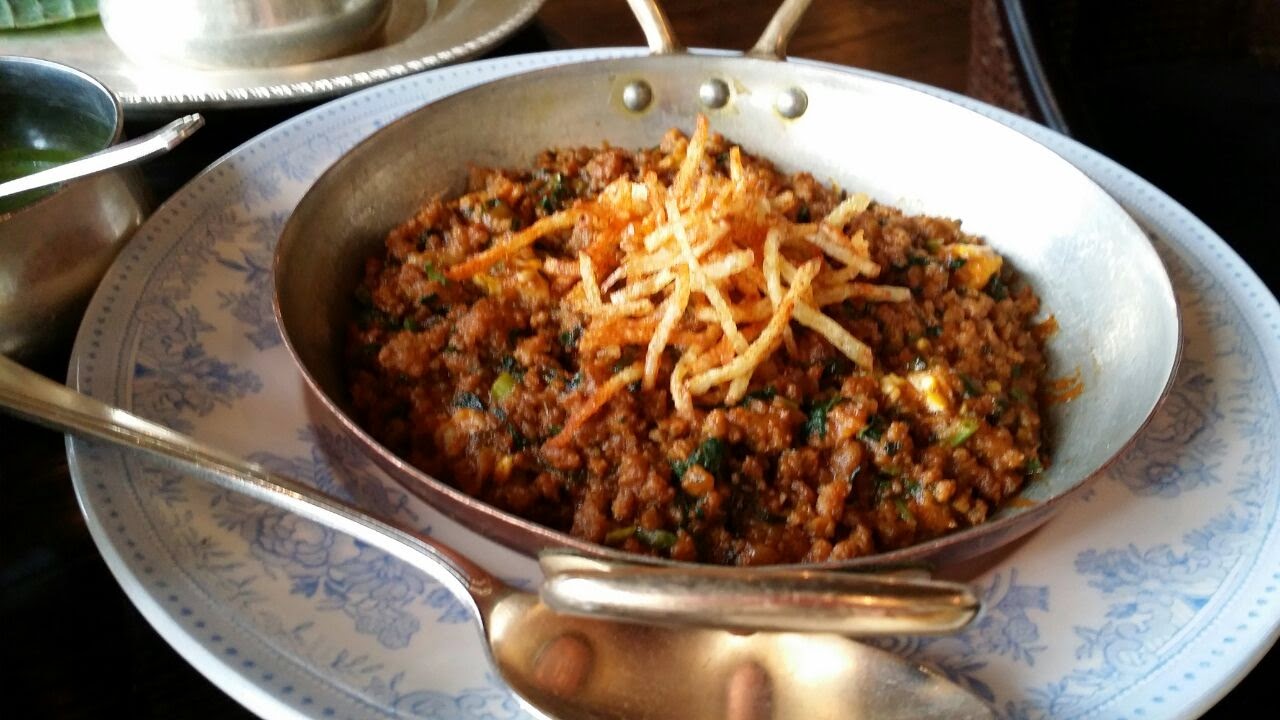 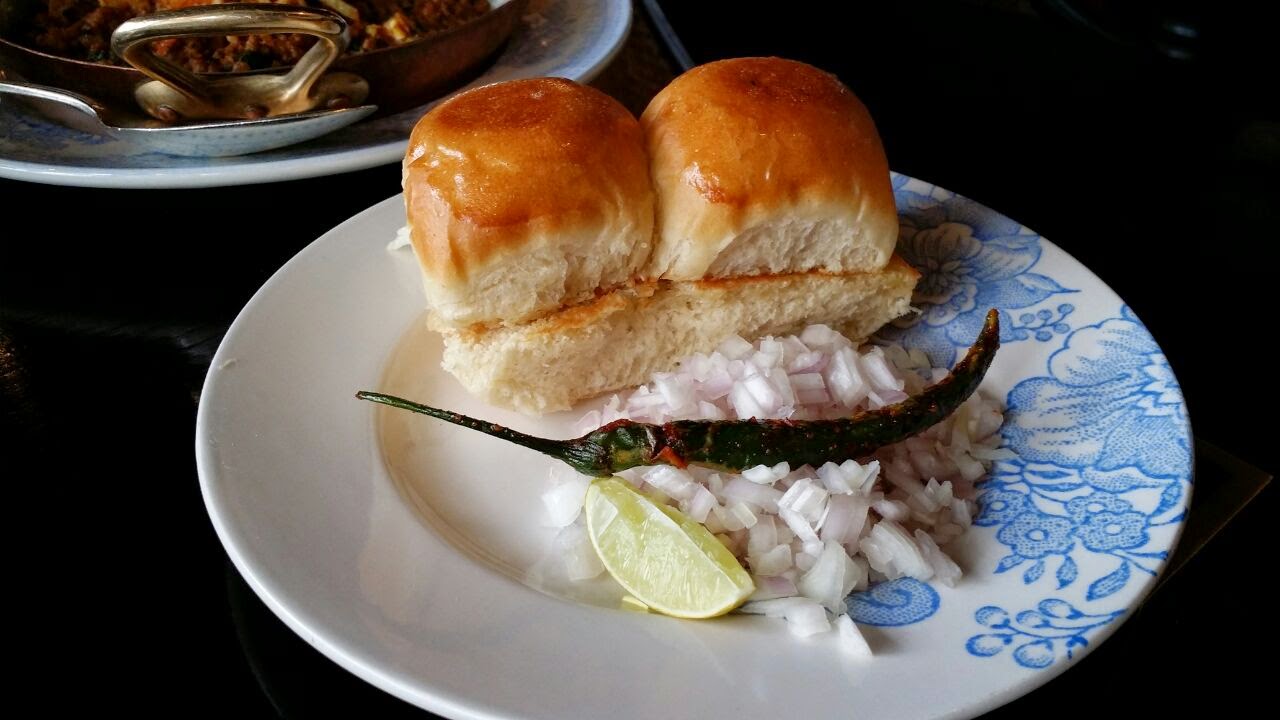 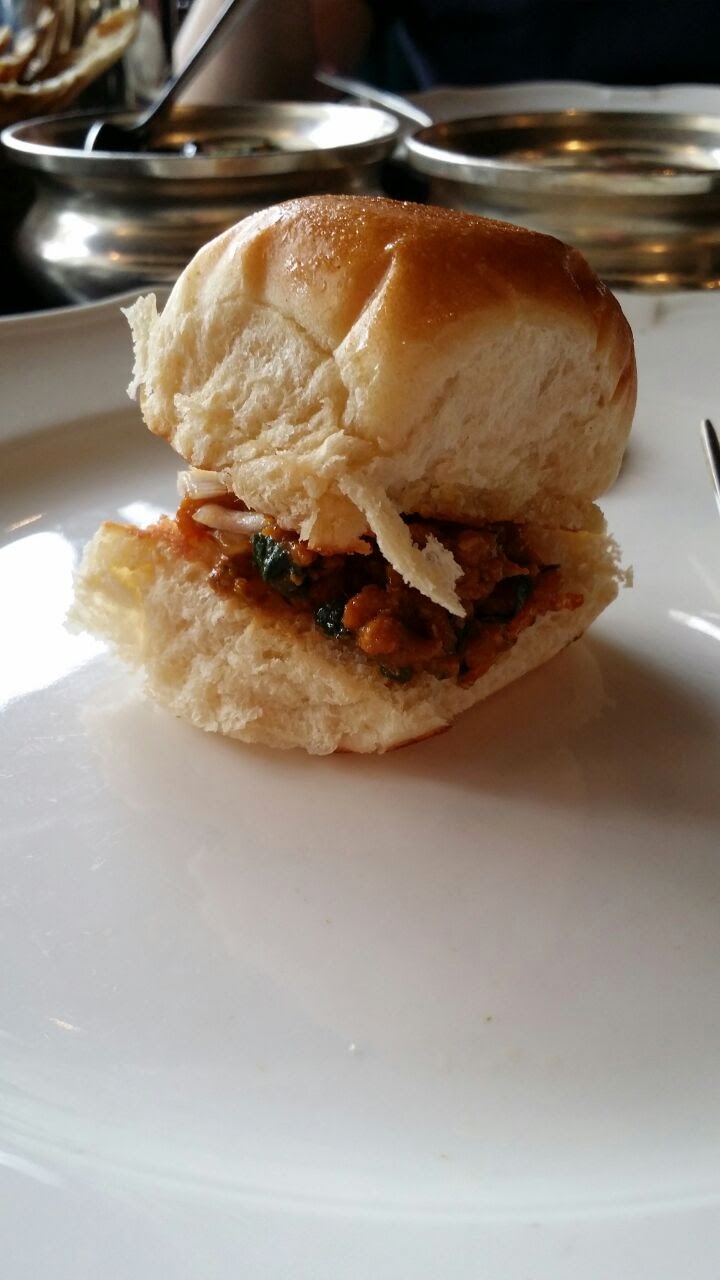 We chose the tandoori guinea fowl breast, leg & green mango chat, mint coriander chutney as the other main. This was slightly too spicy for Mrs Nom and this was quickly spotted by the helpful service who offered a cooling pomegranate & mint raita to offset it. I found the spicing just right and the guinea fowl was grilled perfectly without drying out the meat. The mains were served with dal maharani, palak paneer, basmati rice and a naan bread basket. The sides were generous to say the least and we would have been happy with them being half the size as it felt we were wasting a lot. 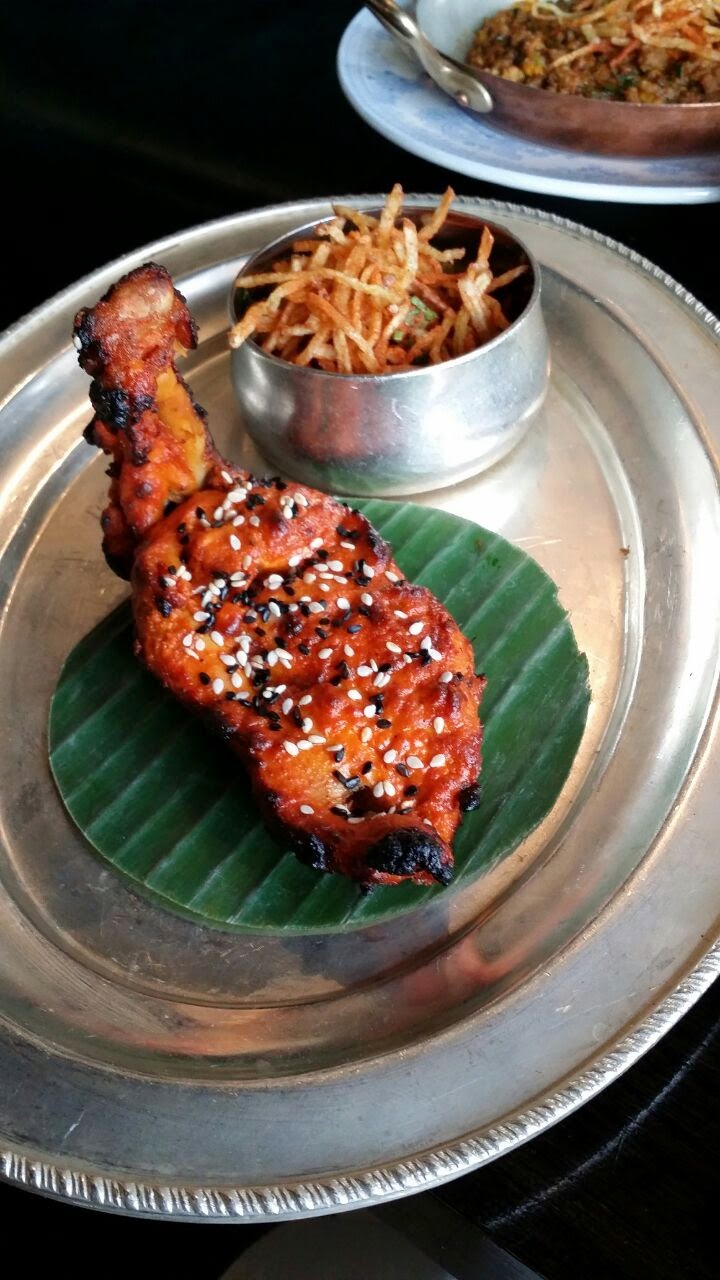 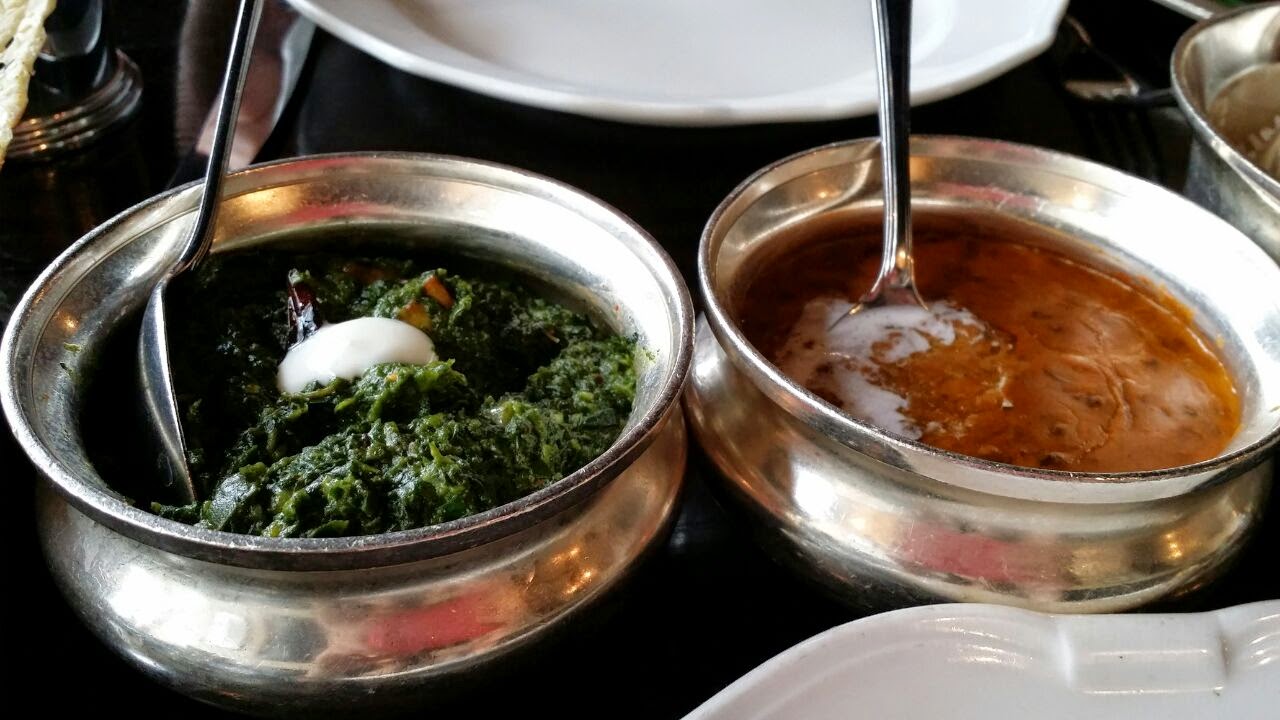 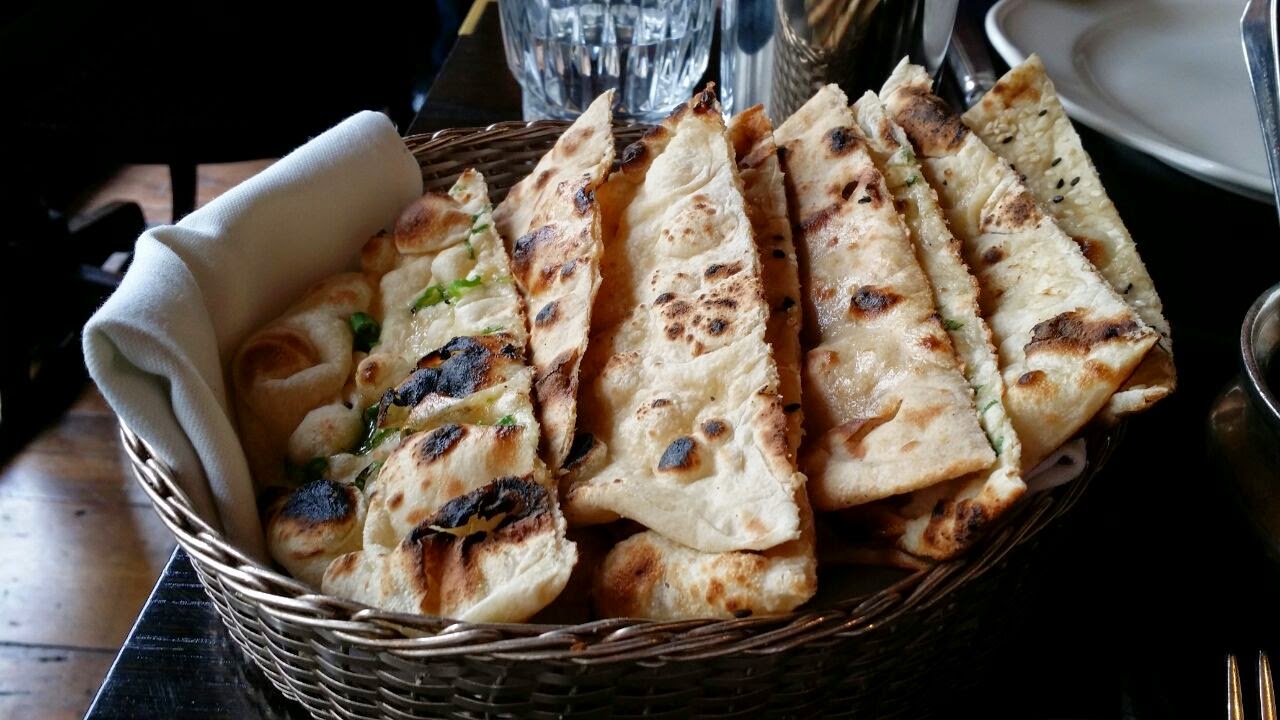 To finish we picked the lightest dessert on the menu despite being at bursting point. The rose kulfi, rose Jelly, vermicelli, basundi, and wild basil seeds was light and fragrantly sweet. The service was on point without being overbearing and it was good to see that the dishes, many with street food origins retained its rugged charm rather than being dainty. For a set lunch it is certainly extremely good value. 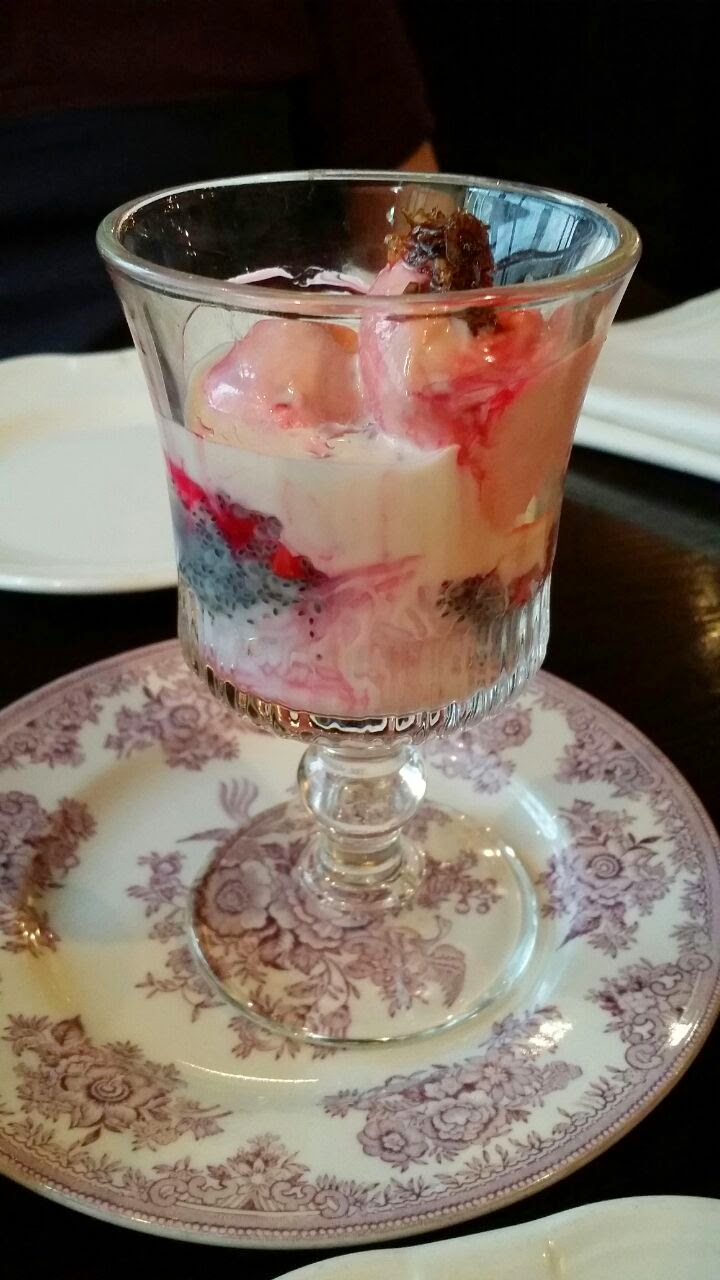 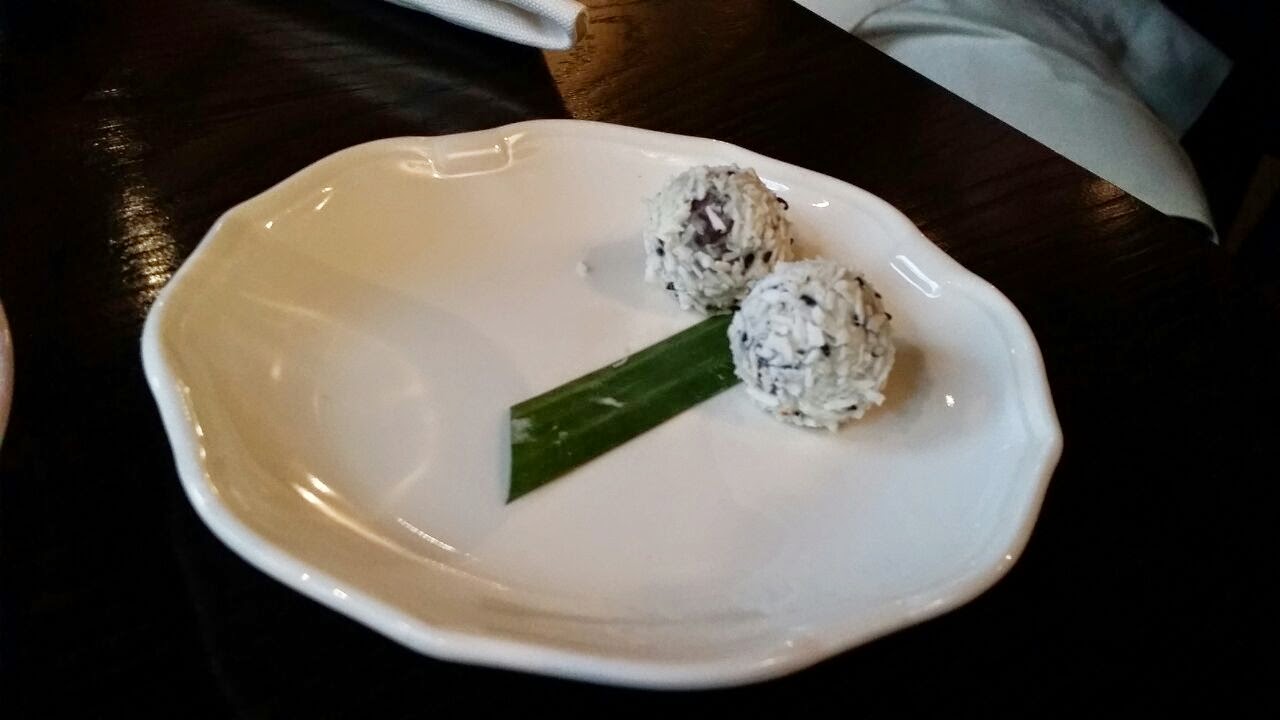