The Palomar is a small compact restaurant on Rupert Street right in the heart of Theatreland and Soho which opened in June. The restaurant serves the food of modern day Jerusalem with a contemporary approach, the menu influenced by the surrounding cultures of Southern Spain, North Africa and the Levant as described on their website.

The open kitchen is at the front of the venue with theatrical bar seats only available for walk-ins. A small dining room with dark oak panelled walls and banquette seating in blue leather is found at the back with tables available for reservations. The menu is split between nishnushim (snacks), raw bar and bigger dishes from the stove, josper and plancha. 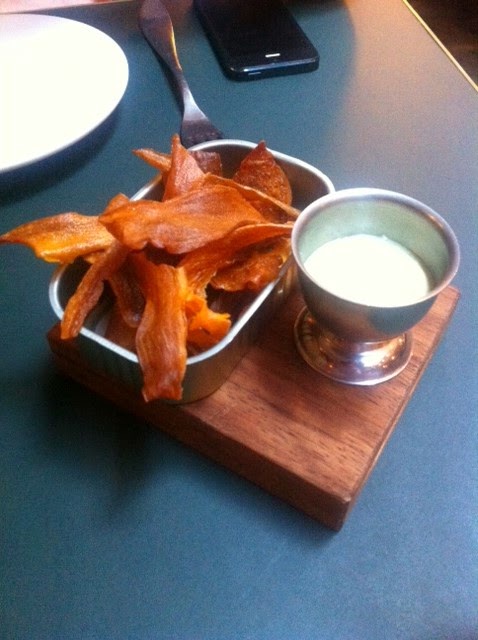 We started with Moroccan oysters with coriander, lemon zest and Arisa oil. These were slight bitter with the lemon zest. The Daily 6 is an assortment of daily mezzes served in small dinky saucepans. The standout mezze for us were the aubergine and lentils. We ordered kubaneh, a wonderful pot baked bread to mop up the mezzes. Our last dish from the raw section was Kubenia, chopped beef fillet with bulgar, tahini, herbs and pine nuts, a well-seasoned tartare. 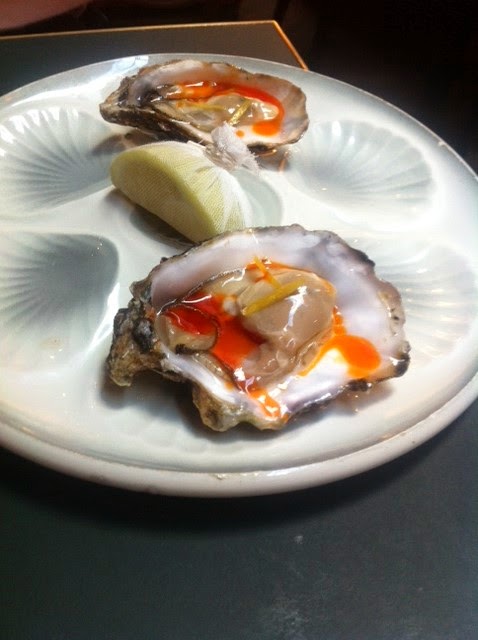 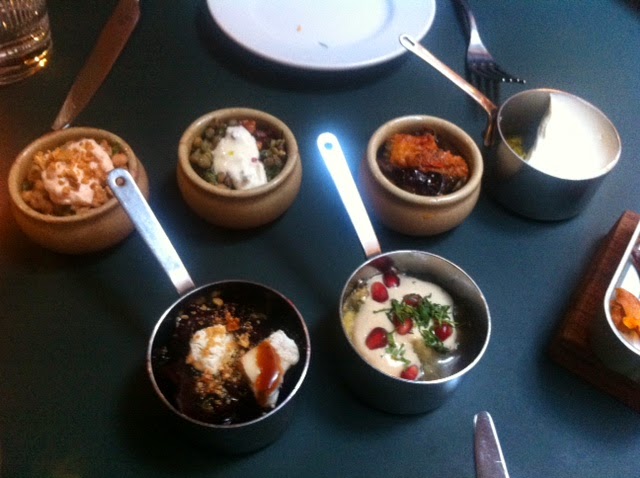 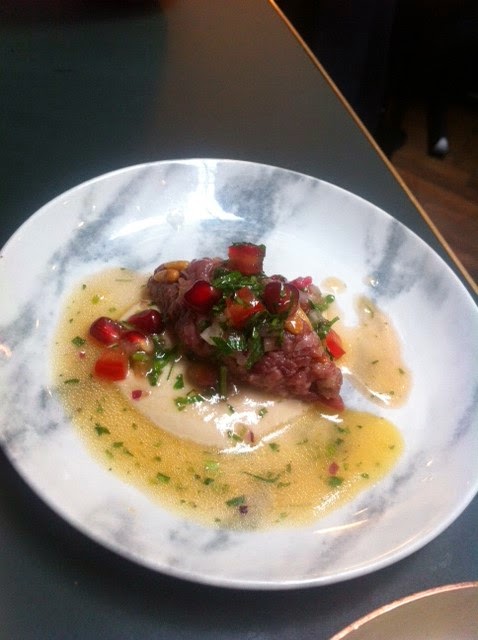 From the bigger plates section we started with Shakshukit, a deconstructed kebab with minced meat, yoghurt, tahini and pita croutons. The flavours married well, it’s been a long time since I had any sort of kebab. Polenta Jerusalem style was served in a jar with asparagus, mushroom ragout and truffle oil. A powerful scent of truffle escaped from the jar when opened, a wonderfully rich dish that had us scraping the last bits from the jar. 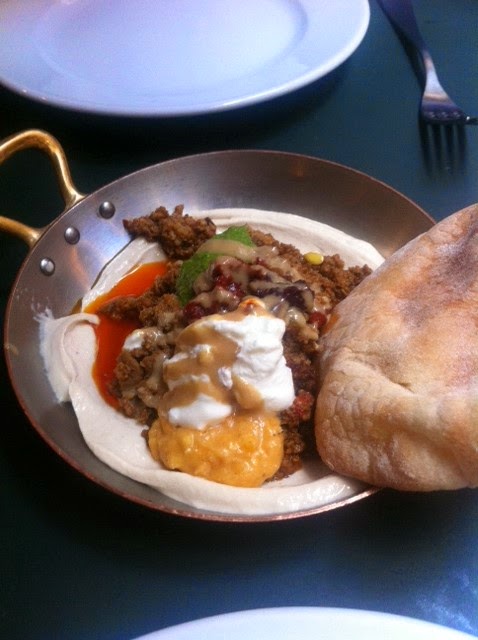 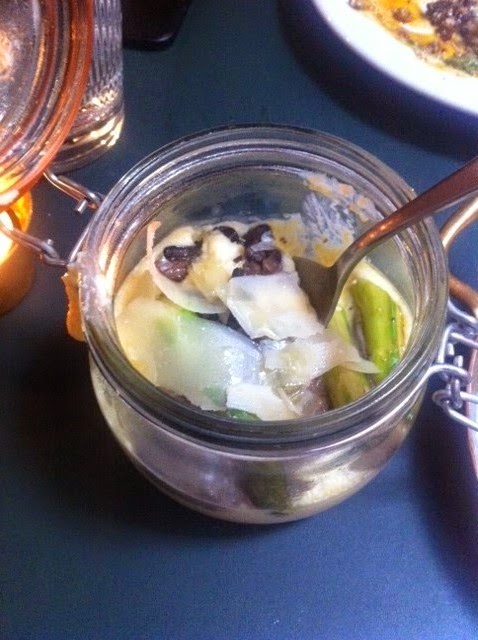 Seared scallops with cured lemon beurre blanc, swiss chard, Jerusalem artichoke and hazelnut tuille. The scallops were cooked enough to give them a bit of bite without being chewy. Our eyes were bigger than our bellies and we ordered pork belly tagine to finish when we saw it paraded on other tables. It come served with dried apricots and Isreali couscous, the pork was slightly dry but was fine with the sauce. Probably the next heaviest dish behind the polenta and one we should have left until next time as we struggled to finish it. 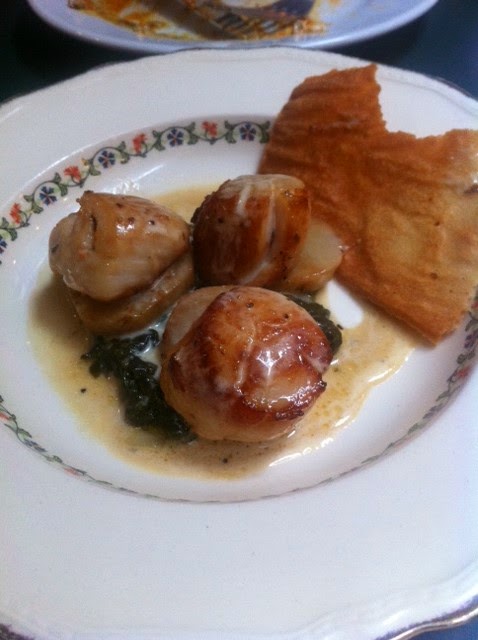 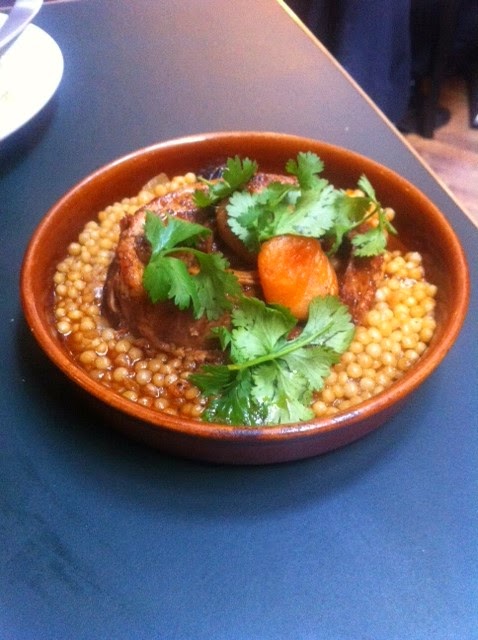 Service was swift and on point, aided by the compact nature of the restaurant. Next time we will probably try for the kitchen bar seats for a couple of dishes, ideal for pre or post theatre.