We were invited to the Manchester leg of the Moretti Gran Tour held by Birra Moretti featuring some of the top Italian street food vendors from London in conjunction with beer from the hosts. Held at the old Granada Studios the event was mainly indoors with a few stalls outside. Although I’m not a keen drinker of beer, Mr Nom was happily gulping down bottles of Birra Moretti in the hot weather. 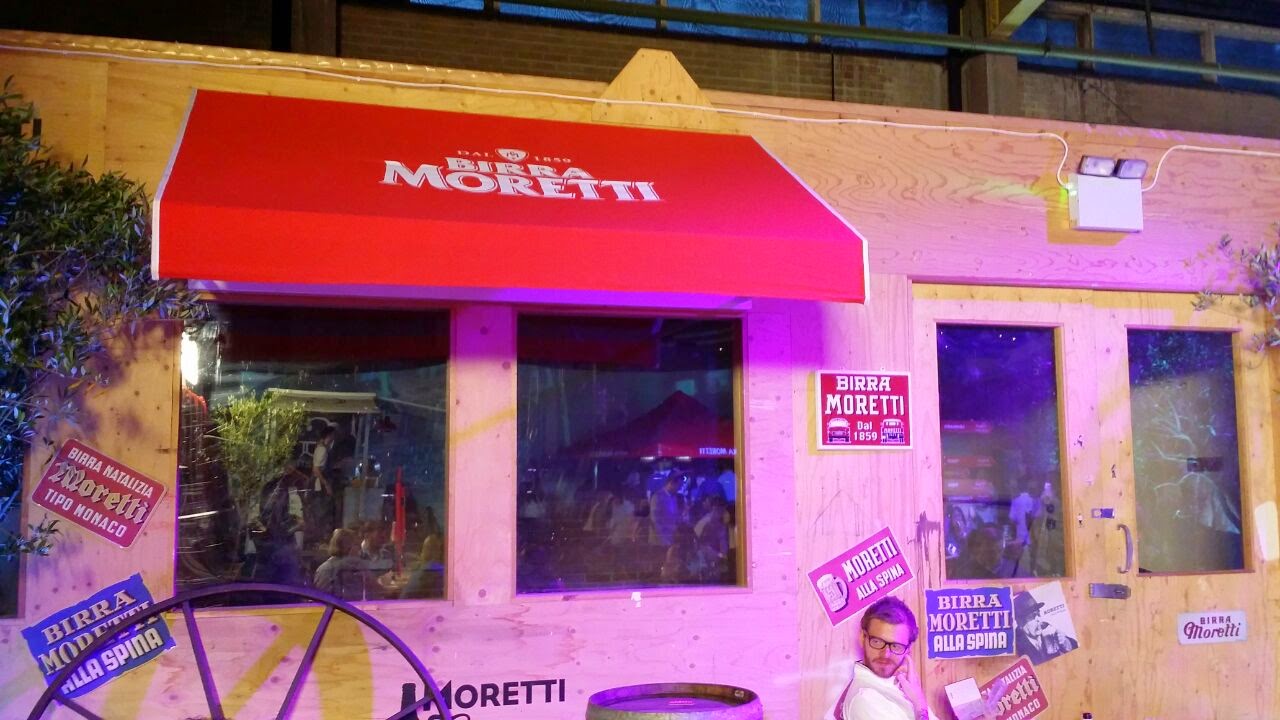 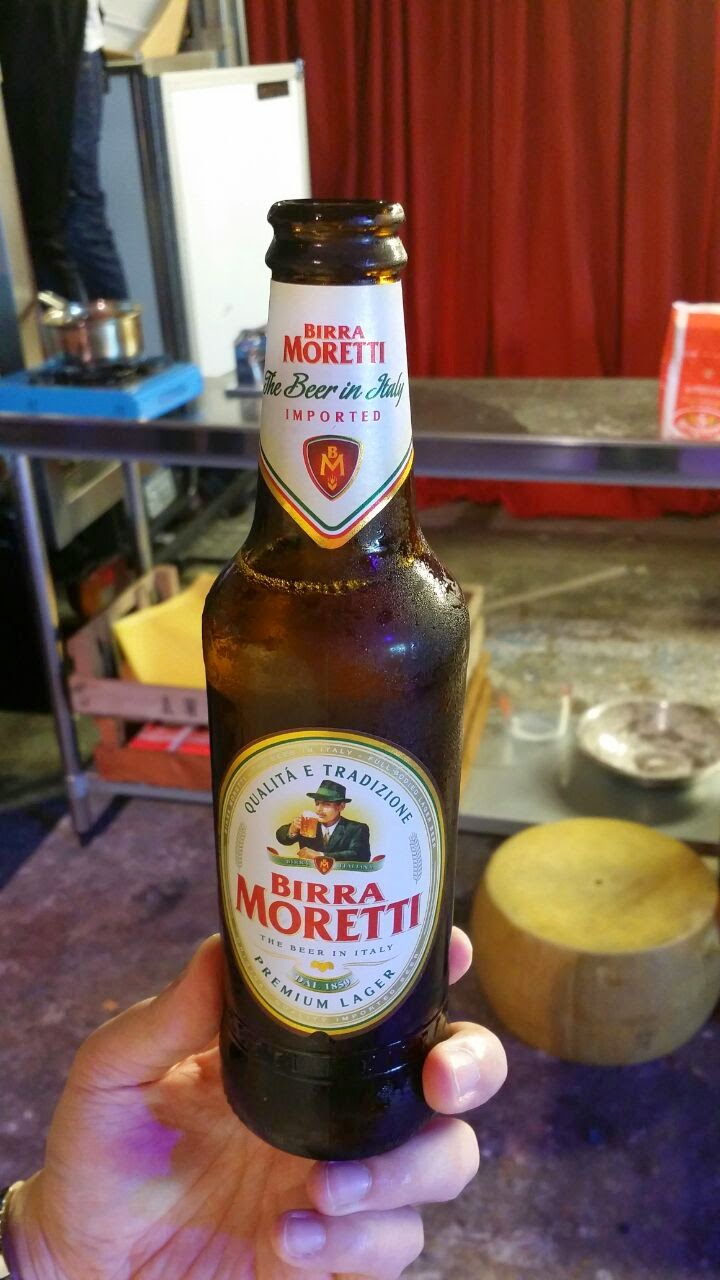 Instead I was more interested in the street food on offer which included arancini balls by Arancini Brothers The porcini and taleggio was our favourite of the two on offer, the other containing tomato, saffron and mozzarella. 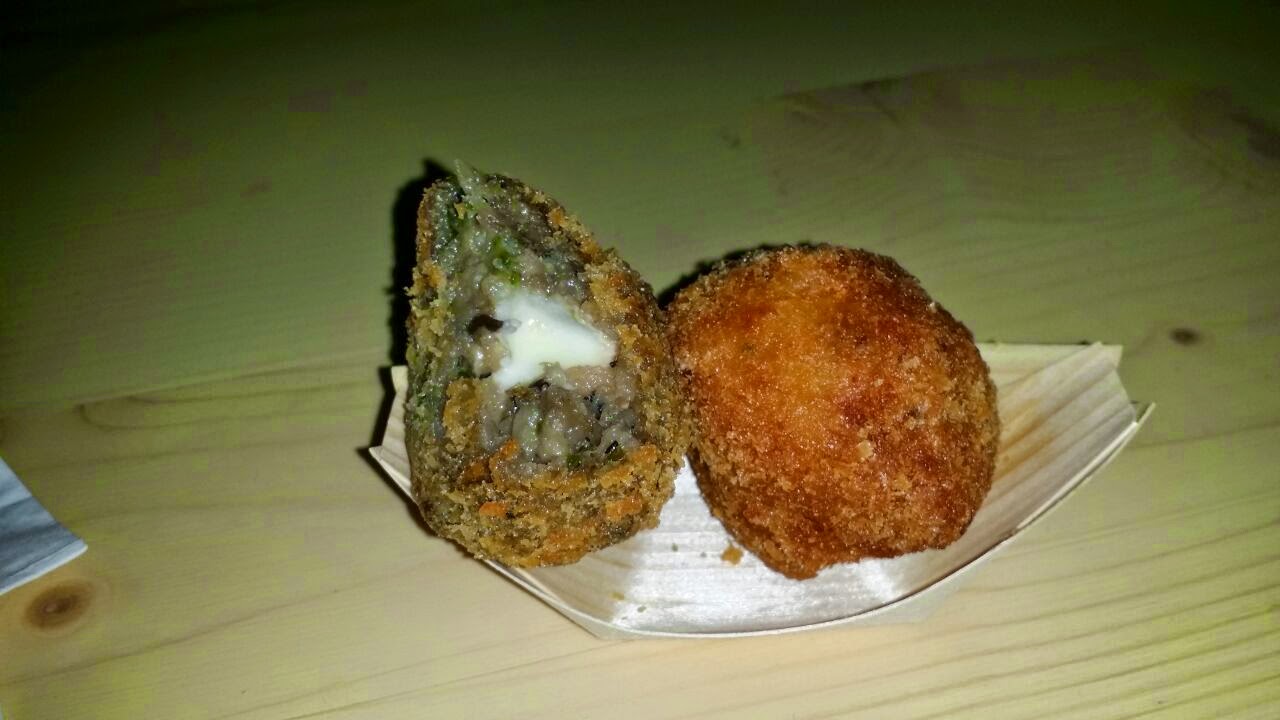 Pasta e Basta served up two variations of gnocchi, a beetroot version for the veggies and one with slow braised pork shoulder. I enjoyed the beetroot gnocchi more out of the two especially because of the creamy gorgonzola sauce. 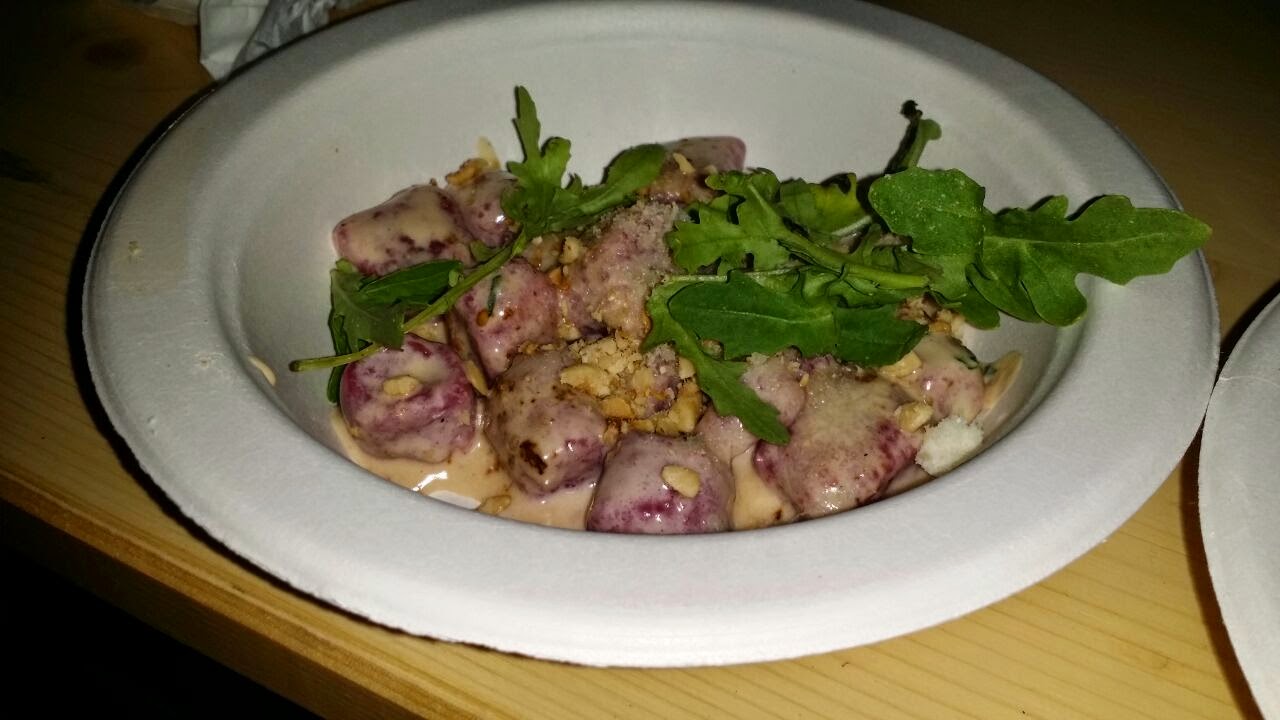 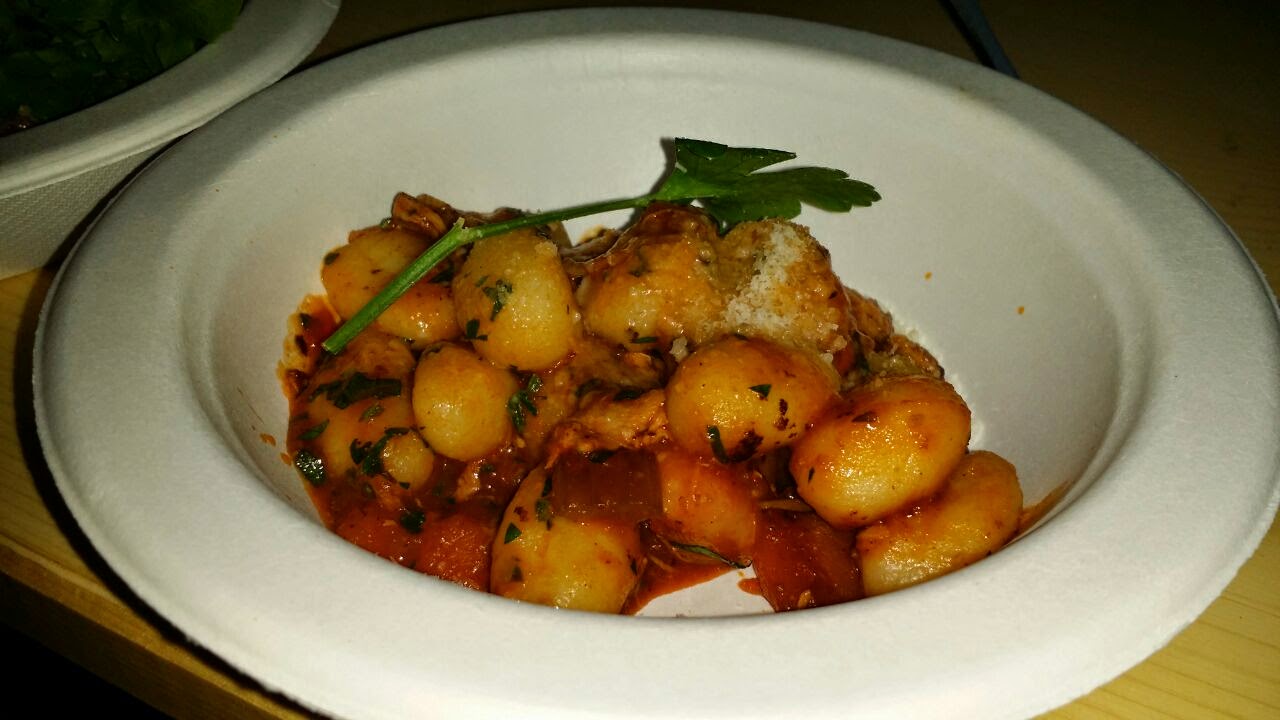 Our favourite stall had to be Gurmetti who served up torta frittas. Extremely light puffed dough topped with thinly sliced pork cheek and served with parmesan cheese on the side. This was the only stall where we had seconds and we will be sure to visit them on Leather Lane next time we are down in London. 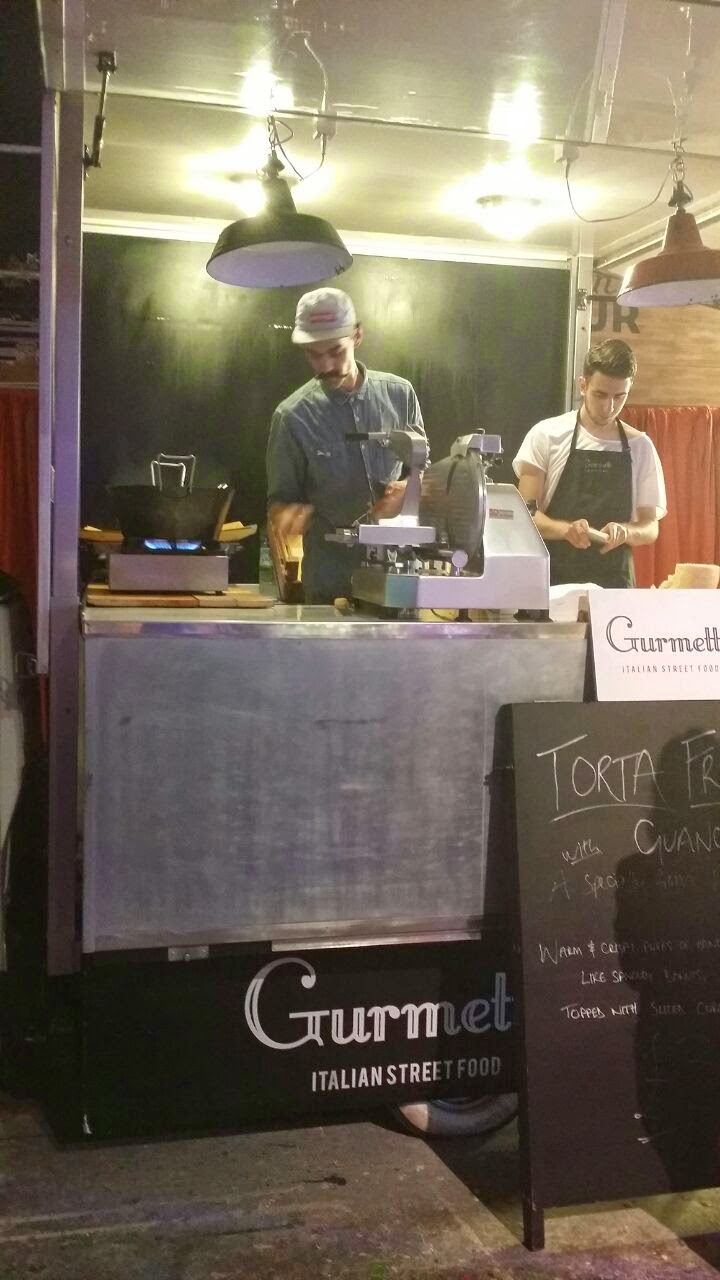 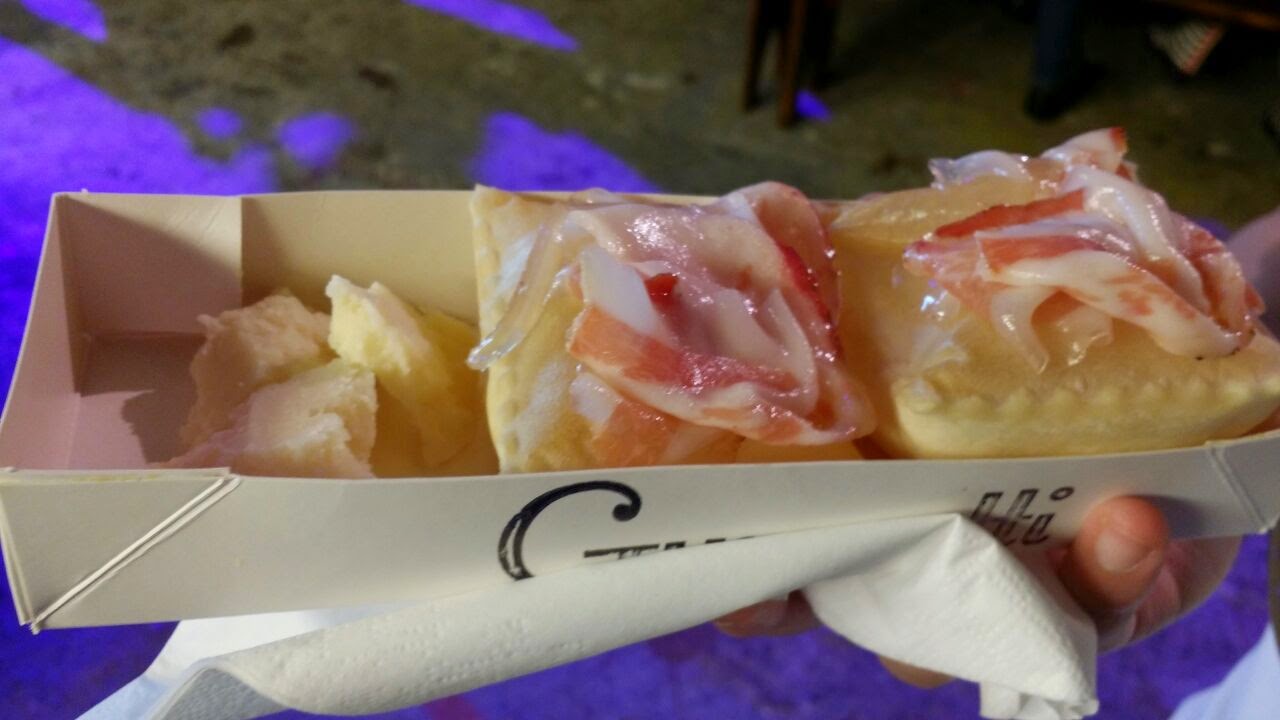 The Cheeky Italian were serving panzerotti fritti. Deep fried calzone to order with pork & beef meatballs, tomato sauce and fontina cheese, the casing looked really heavy but it was lighter than expected. 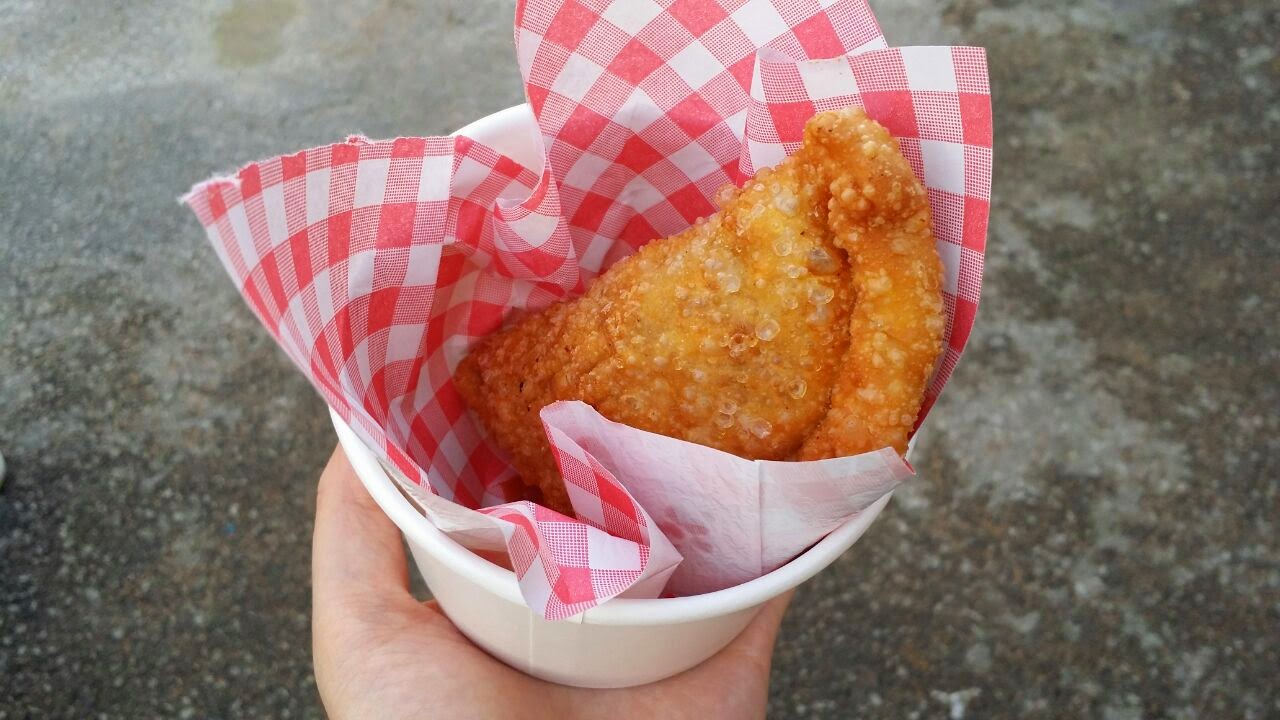 Outside Pizza Pilgrims were whipping up margarita pizzas. Although amazingly we witnessed that some people felt the two minute wait for the pizza to cook in the wood fired oven was too long and joined other queues which were even longer!  We weren’t complaining however as it meant we got our pizza fix quicker. The most popular stall of the night was probably Forza Win serving up porchetta sandwiches, the glistening and charred meat looked good on the spit roast but we were too full to try it. 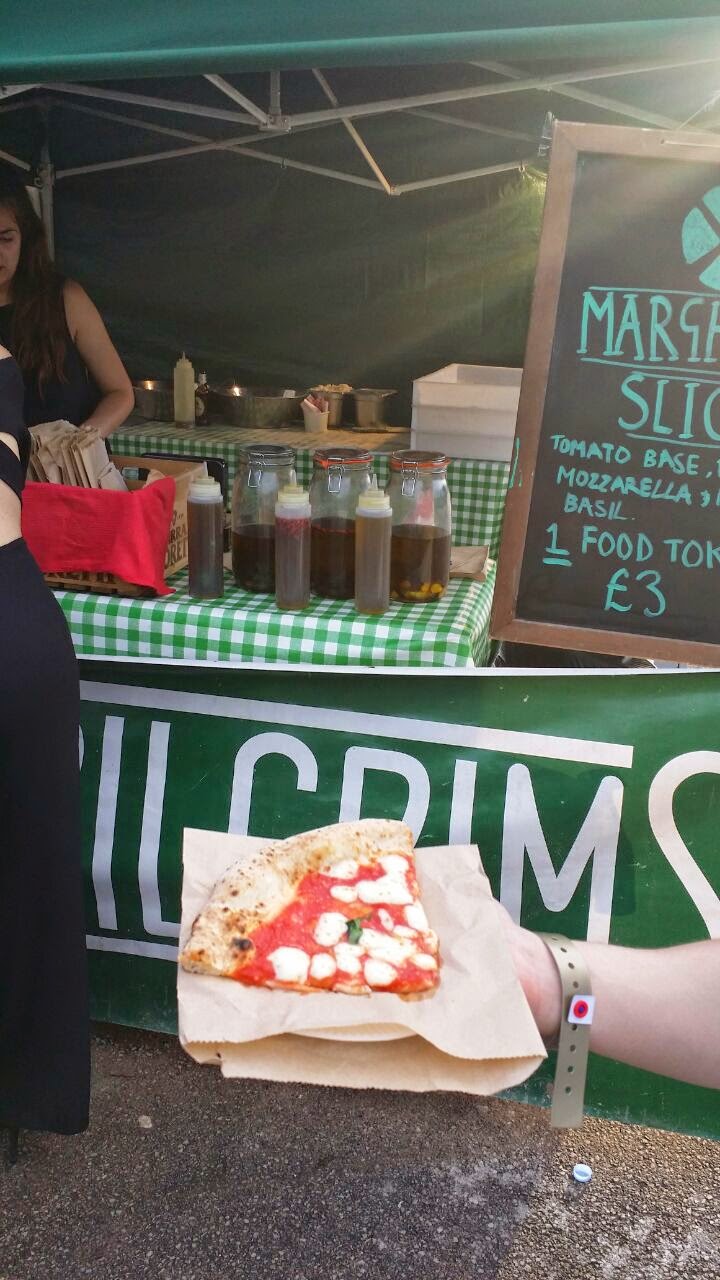 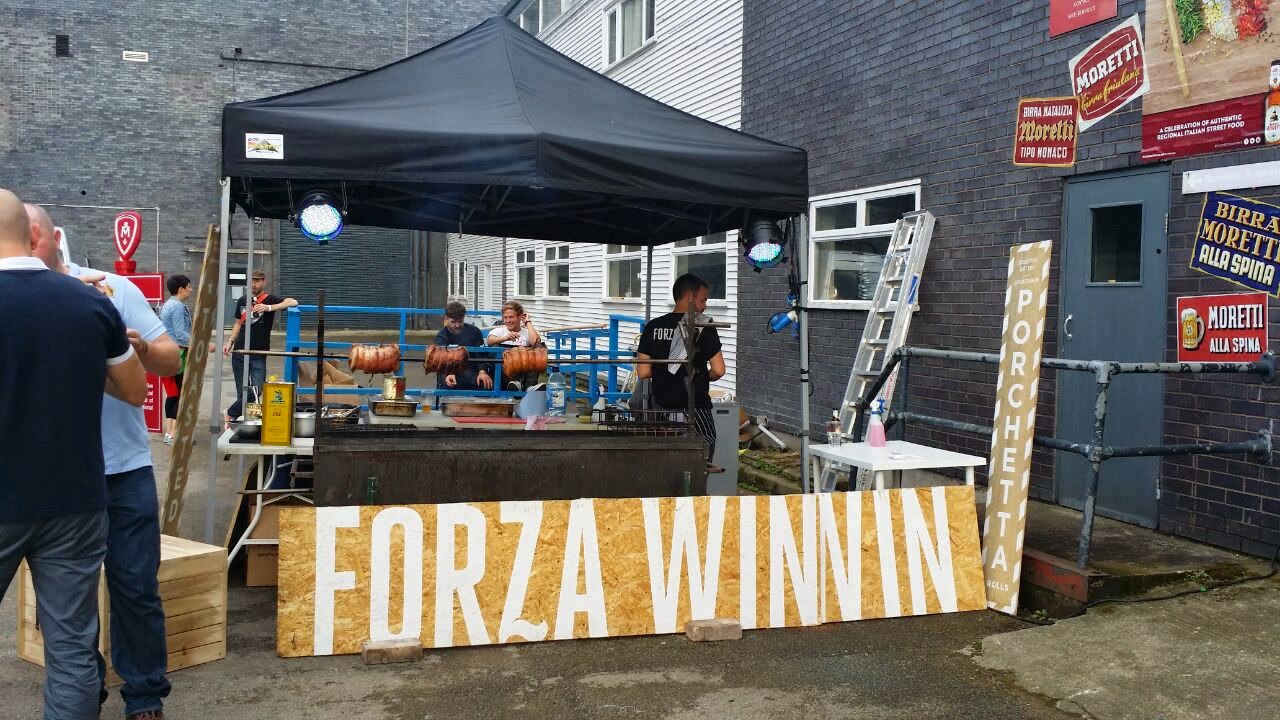 Onto dessert which was provided by the popular Gelupo, which has to be some of the best gelato I’ve had in the UK. I was craving this the minute I saw the stall but I knew I had to try the savoury food first. I was a bit greedy and ordered three flavours during the first visit. All the flavours were too tempting so I requested smaller scoops of melon, which was so pure and my favourite, mint stracciatella and pistachio. I made Mr Nom go back for seconds. However to my surprise he came back with full sized scoops of ricotta & sour cherry and blood orange which were ideal to cool off in the sun. 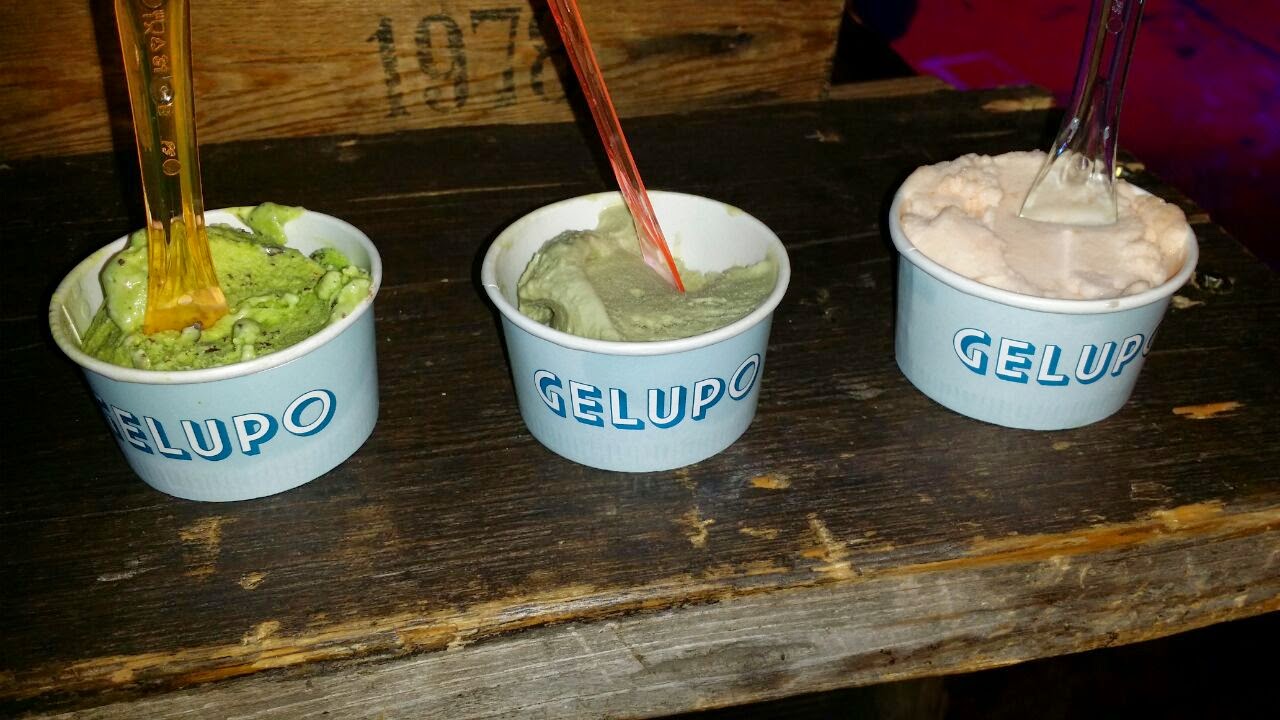 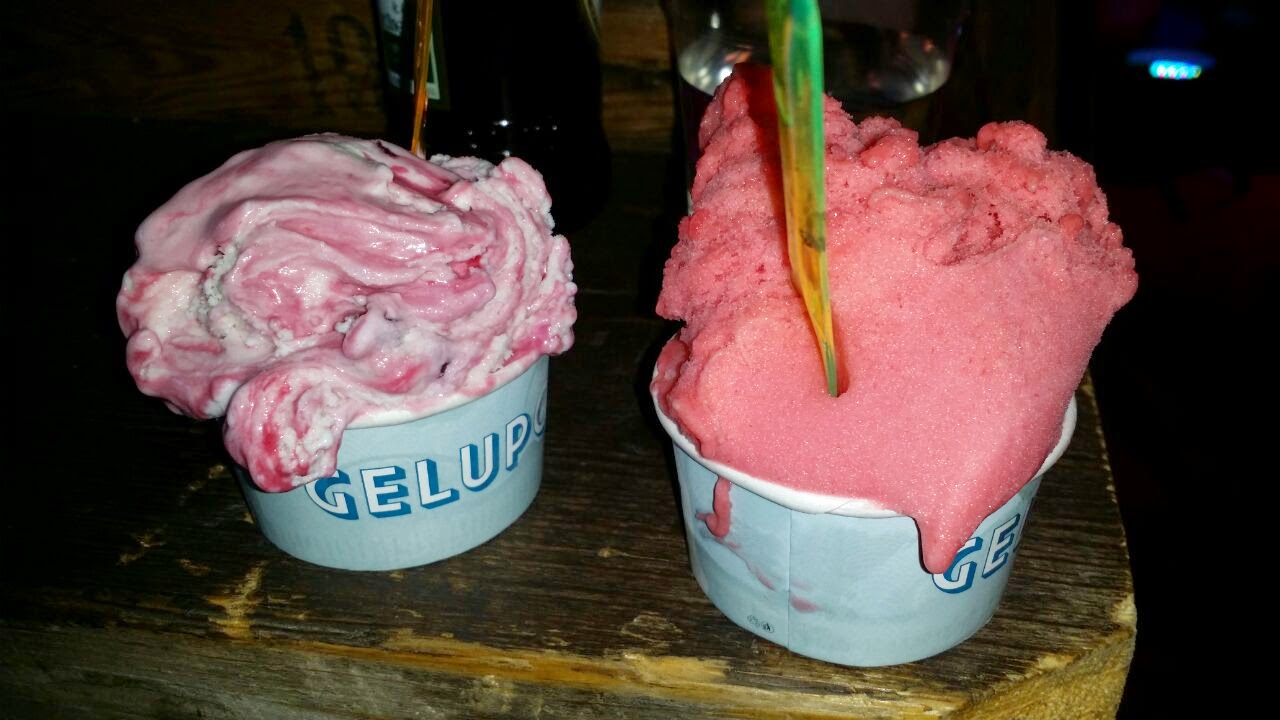 What a great event it was, it gave us a little taste of Italy and if this is what we can expect to find in Italy then it will be high on our next holiday list. 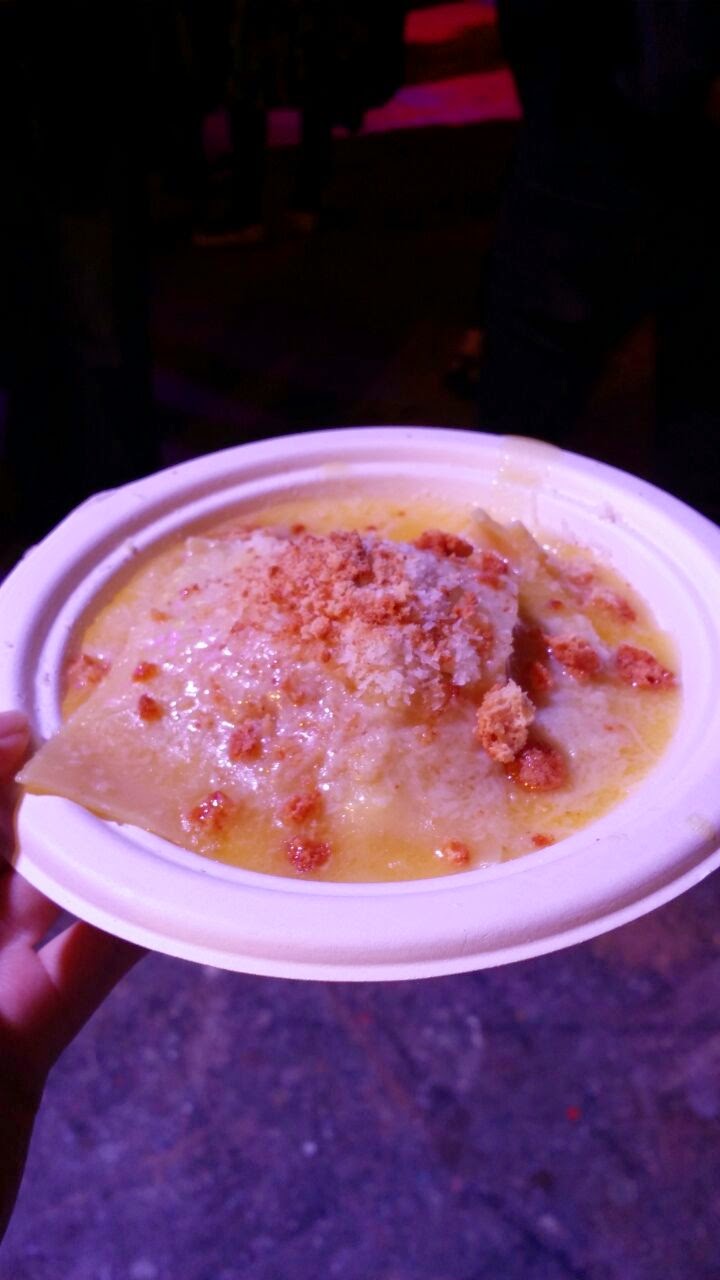