One of the highlights of our trip to Hong Kong last year was a visit to 2 Michelin starred Amber based in The Landmark Mandarin Oriental within the Central district.  Amber is the highest Hong Kong entry within the San Pellegrino 2013 list at 36th, at the time of our visit it was 44th on the 2012 listing.  We made a reservation some half a year in advance for the weekend wine lunch menu which featured 6 courses with wine pairings for a very reasonable price of approximately £70 when converted from Hong Kong dollars.
The interior was plush as one would expect being situated in a Mandarin Oriental hotel.  An elegant chime arrangement hanged from the high ceiling.  The menu featured a starter, middle and main course with three choices for each course followed by three set desserts. 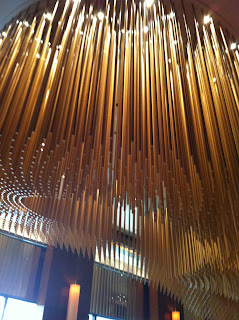 After selecting our choices the sommelier poured us our aperitif of Champagne which was included as part of the wine flight.  This was followed by the trio of amuse bouche of foie gras lollipops, vol au vent filled with dungeress crab  and cumin and lastly fried pork croquett.  The foie gras lollipop was indulgent and smooth with a beetroot coating on the outside, this was the best of the trio although the vol au vent and croquette were also very nice. 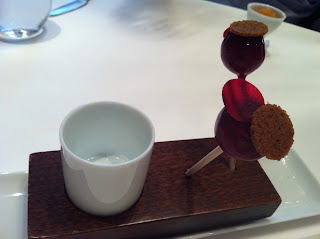 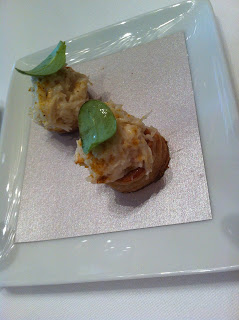 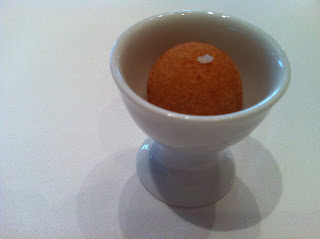 I chose the mackerel for the first course which was a delight but cannot recall what Mrs Nom chose (picture included below). 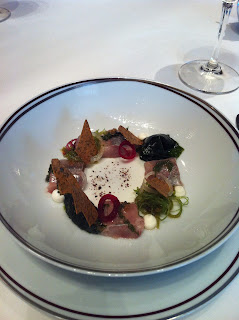 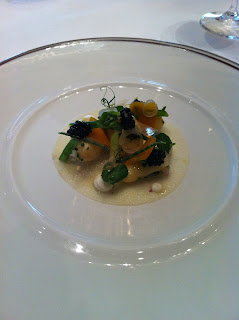 For the middle course Mrs Nom chose the Tasmanian salmon and I selected the duck foie gras ravioli in a veloute of Hokkaido corn.  The veloute was packed flavour with the rich, sweet corn and the foie gras was second to the corn on this occasion.  Every time I have corn on the cob I think of the veloute, a simple but memorable dish.  From the bit that I tried of the salmon it was well cooked and the accompanying foam was well received. 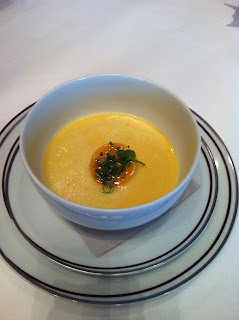 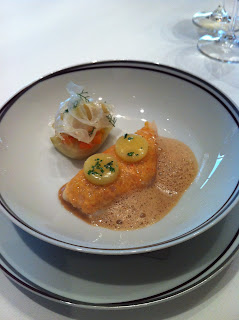 For the main course I chose the Iberian pork which was fantastically cooked and Mrs Nom chose the lamb shoulder which was very tender and the meat melted in the mouth. 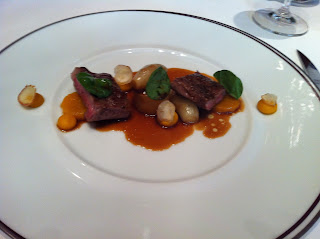 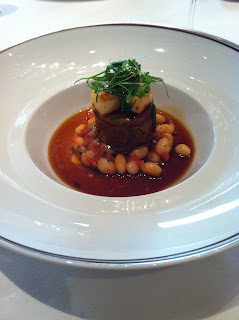 The first dessert was a refreshing assemble of berries with a balsamic jelly, this helped cleanse the palate for the remaining desserts. 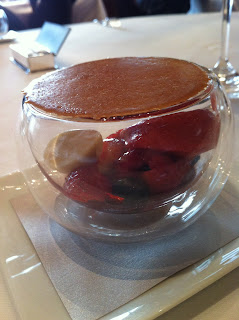 This was followed by a chestnut ice cream with spaghetti shaped chestnut cream on a layer of biscuits (my memory is bad so forgive me for the lack of detail).  It reminded me of Il Forno in Liverpool where I was intrigued and first ordered a spaghetti ice cream only to be disappointed when it soon melted into a big splodge.  This however was much more refined with the emphasis on the chestnut and reminded me of chestnut based cakes. 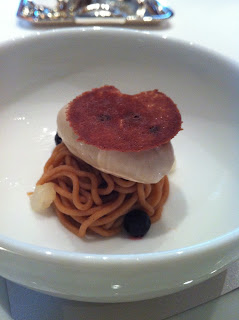 The last dessert was my favourite, a bar of 64% tainori chocolate with milk sorbet on a bed of lemon jelly.  The dessert was well balanced with the jelly cutting through the sweetness of the chocolate.  We ended the meal with coffee and petite fours served in a novel sliding multi-tier tin. 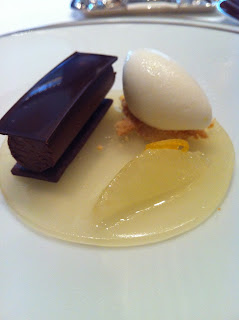 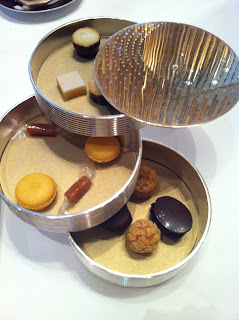 I enjoyed the wine pairings with each dish and the glasses were on the generous side.   So much so that Mrs Nom was struggling to keep up but I gladly helped her to finish off the wines.  We noted on the next table that a couple did not appear to be wine drinkers and the table was laden with full glasses of wine from each course.  Perhaps there for the food experience or fellow bloggers as they had a Canon with a huge lens on the table, whilst we make do with our trusty iPhone.

This was our first visit to a 2 star restaurant and it certainly met our expectations in terms of the food and service which was efficient and well oiled, in addition to being extremely good value.  I wanted to try the sea urchin dish from the a la carte but opted against it due to the price, however I have since found out that it is now offered as a choice on the wine lunch at a smaller supplement.  Maybe one day when we revisit Hong Kong, although there are plenty of other restaurants that are high on our to do list which we didn’t manage to cram in!
Posted by Nomface at 13:50