This was our first time at the Southport food and drink festival, not knowing what to expect we were pleasantly surprised at the size of the festival at Victoria Park. The sunny weather was a bonus unlike our rain hit visit to Tatton Park a few weeks back.  There were not many ice cream stalls who probably missed a trick anticipating a whitewash.   There was no charge for the festival unlike the rip off Tatton Park with entry at £7.50 per head.
As usual with food festivals, our tactic is to first check out all of the stalls and then to decide where to eat. But before any food, the first priority was a drink at The Fresh Lemonade Company as we wanted something to quench our thirst.  We opted for a pink lemonade, other choices included original, lime and chilli.
One stall that got our attention was Twisted Potato. I was excited as I had seen it on TV and on pictures for some street stalls in Taiwan although the girl at the stall confirmed it was from Malaysia. The twisted potato was basically potato on a stick cut into a large curly chip shape and deep-fired. It was served with a choice of seasoning salts of which we chose onion salt and barbeque. After waiting patiently in line we were finally served and all the anticipation was dashed when we tasted the oil drenched chip.  A huge disappointment, the potato had also cooled down and was not pleasant, I only had a few bites and Mr Nom finished the lot off. 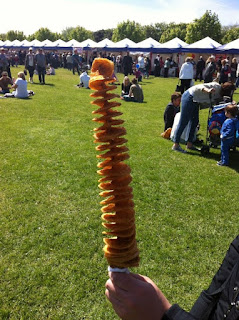 We come across The Moocher at a Guerrilla Eats event in Manchester before this but were disappointed that they had ran out of venison.  However we were in luck as it was on the menu again so we jumped at it after a slight deliberation whether to go for the veal instead.  We had a chat to the owners and he also recommended the venison over the veal too so I guess it reassured me it was the right decision. It was cooked medium and came with garlic mayo which complimented the meat well. 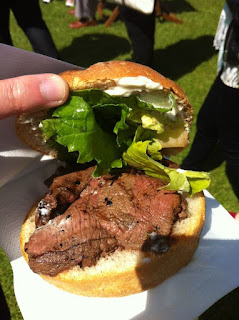 Mr Nom is a carnivore so opted next for some fillet steak at Miller & Carter served with chips and peppercorn sauce.  You can’t really go wrong with steak and chips although the copious amount of seasoning on the fillet joints is bad news for our arteries. 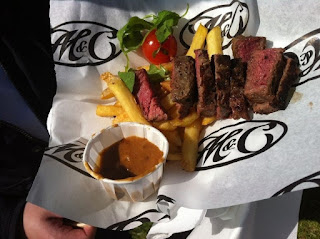 By now we were thirsty again and I had spotted a fresh coconut stand earlier so returned for a whole coconut freshly opened for the juice.  The last thing chose was a banana and toffee crepe which was pretty standard. I suppose the bananas were not too particularly ripe which I’m not too fond off and there was only just enough toffee sauce on the crepe. 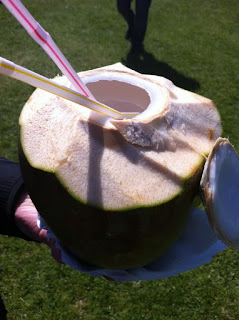 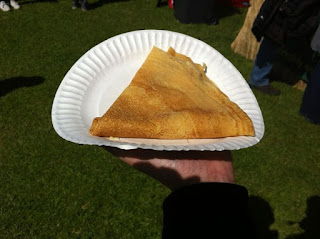 Overall, the Southport Food and Drink Festival were a good event and a good day out on a lovely day. Mr Nom noticed the food was priced reasonably and better value when compared to the Liverpool Food and Drink festival and the Foodies Festival at Tatton Park.
Posted by Nomface at 17:37