During a recent work visit to London I tried out Duck & Waffle situated on the 40th floor of Heron building.  A previous attempt at a walk in was met with a 4 hour wait for a table so we abandoned it for a 6pm booking the following week.  From a brief wait at the ground floor entrance it seemed that its clientele were a steady stream of City type professionals so I was expecting it to be on the expensive side.
The group also operate Sushi Samba on the floors below so the lift area was constantly busy with the lift being jam packed on the way up.  The bar area was different with an open bar situated in the middle of the room with no bar counters so the bartenders were in full view with their backs to the clientele when making drinks.  We were led to the main dining area and I noted that there was ample space between each table which surprised me as I expected them to pack them in like sardines to cover what is sure to be massive rent costs.
We were sat at a table facing the South East direction towards Tower Bridge.   I had a couple of choices already made up in my mind on prior study of the menu.  Our server explained that the dishes would come out as and when they are ready tapas style which was fine due to the grazing style of the plates.  We purposely ordered a conservative amount of dishes leaving us the option to order more if required.  We were advised that we had the table for 2 hours so wanted to make use of this rather than being rushed.
The first dish delivered was scallop with apple, black truffle and lime served on a red salt brick which helped season the scallop I was told.  To describe the serving size as small would be an understatement, barely one whole scallop cut into five pieces.  This is something I’ve noticed on a few menus recently where I actively avoid if scallop is described in the singular term rather than plural.  Nevertheless the scallop was fresh and refreshing with the apple and lime with the truffle giving it an added dimension. 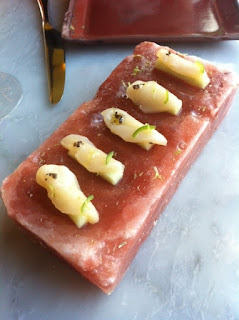 Next up was roasted octopus with chirizo, lemon and capers.  This was nicely presented and the octopus was cooked just right and was not tough and chewy.  The chorizo and capers provided some needed flavour.  The pollock meatballs with lobster cream and parmesan was a delight due to the lobster cream.  The essence of lobster shone through in the flavour of the cream and I could have this as a soup, good foil for the pollock. 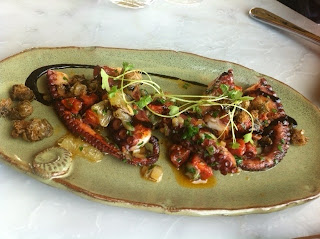 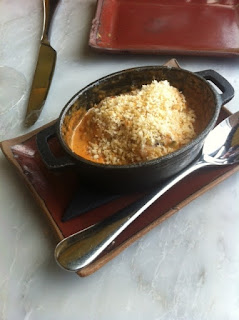 By now the dishes were coming thick and fast so we were glad we didn’t order all at once.  The last of the small dishes we ordered was spiced lamb cutlets with smoked aubergine puree.  Again this was nicely cooked and was pleasant without being exceptional. The only big or main course type dish that we ordered was the signature duck & waffle, confit duck leg, fried duck egg and mustard maple syrup.  Simple and effective, would make a fine breakfast.  The first thing I noted was that egg yolk was covered in a gigantic sprinkling of salt.  The waffle to be critical was a touch overdone.  However the confit duck leg was moist and flaked from the bone easily.  I don’t recall deducting the mustard element of the maple syrup but it was just the right sweetness. 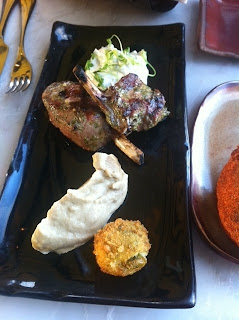 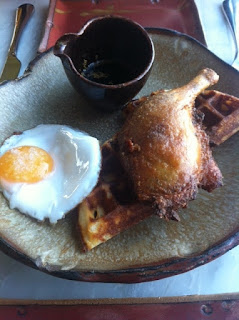 Being still peckish we decided to order a few more dishes.  I had my eye on the BBQ spiced crispy pig ears and the chance came.  They were served in a paper bag which was sealed with wax which was quite novel and were quite crunchy and enjoyable.  These would be ideal as a snack at the cinema. 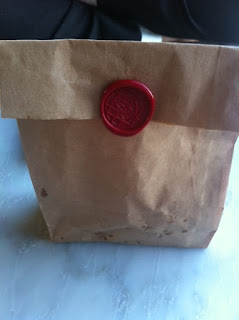 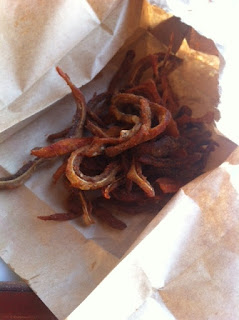 The last dish was the most disappointing of the night and out of fluke more than luck it was also the most filling.  We were presented with a huge doughy ball resembling a basketball which was a spicy ox cheek doughnut with apricot jam.  The dough was much too thick with very little filling that was rather bland.  Definitely one that needs revamping in my opinion although it did the trick in filling a hole. 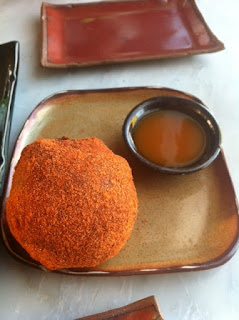 My colleague finished with a deep fried Mars bar for dessert.  I had a taste and it was gooey and sweet as expected.  To conclude, the key selling point of the restaurant is the view.  The food whilst being simple and pleasant but no more.  The cost for the food dishes cost approximately £100 including service which is expensive for the servings but expected given the probable huge overheads.  It is worth trying but not sure about returning. 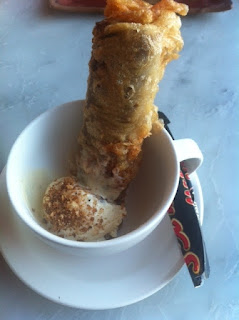