One day whilst browsing on the Lucha Libre website we noticed that the menu was larger than we remembered and were tempted to return since the last time we visited not long after it opened last year.
We ordered a couple of tacos, a quesadilla and a mixed grill with the intention to add more if our appetites allowed.  This was probably due to it being a lunchtime visit and also due to the fact that we over ordered at Luck, Lust, Liquor and Burn a couple months back to the point where a table in the eye line of Mrs Nom were sniggering at us (post to follow shortly).
The first dish to arrive was the mixed grill which consisted of ribs, chorizo burger and chicken wings.  The portion was quite generous given that it was classed as a small plate. 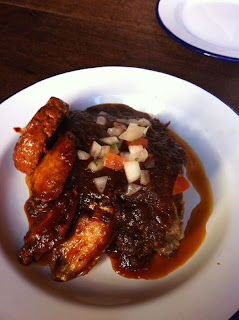 We ordered two sets of tacos, pork pil bil along with prawn & mango.  The pork servings laying on the tacos were again generous with it proving difficult to wrap the taco and to avoid the juice oozing out when devouring it, not that we were complaining.  Mrs Nom thought the tacos were a bit thick, although I felt they were ok given the amount of pork. 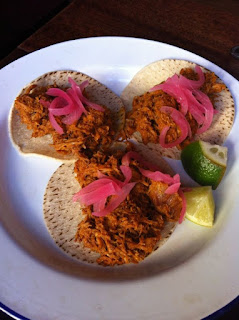 The prawn and mango tacos were less flavoursome when compared to the pork pil bil but were pleasant with an added kick from the chillis. 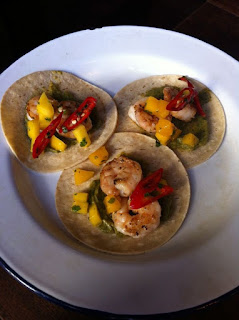 Any thoughts of ordering anymore where abandoned once I tackled the pork belly and pineapple quesadilla.  Filled with rich warm melted cheese this was a satisfying lunchtime dish.  Mrs Nom made the mistake of having this before the tacos and struggled through the tacos.  However she felt the pineapple gave the quesadilla a nice sweetness and cut through the gooey yet filling cheese. 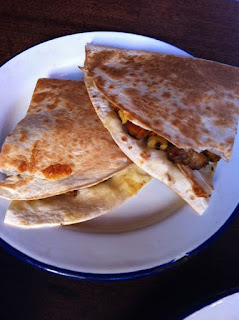 We washed the lot down with a frozen margarita and pineapple soda which were adequately refreshing.  On seeing and tasting the pineapple soda Mrs Nom regretted ordering her peach margarita as the taste of tequila gave her nightmares from too many tequila shots in recent times. Despite the best efforts of our waitress trying to sell us the desserts we politely declined.  All in all the service and the food were pleasant and Lucha Libre is well worth a visit. 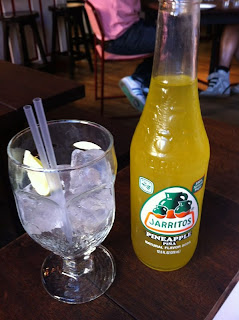 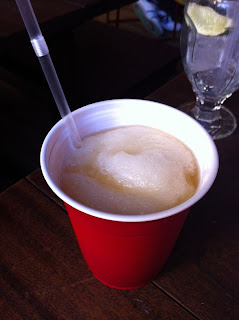