Having been strawberry picking before at Claremont Farm our interest was spiked by the news of them opening a pop up asparagus eatery within Liverpool One.  It is situated in the space previously taken by Harvey Nichols temporary food and drink shop. 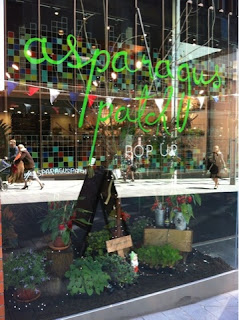 We selected nearly everything on the blackboard menu with the exception of the soup.  First up was the bacon and asparagus bap consisting of a thick slice of bacon and 5 spears of fresh asparagus. This definitely required some sauce due to the dry combination of the bacon and bap. Luckily we also ordered the asparagus spears with tarragon hollandaise and a sliver of balsamic glaze. The excess hollandaise was put to good use and avoided wastage! So far so good, this was the healthiest (if you discount the bacon) and most simple lunch we had had in a while.  The third dish was asparagus rolled and goat’s cheese wrapped in ham garnished with watercress and a balsamic glaze.  Not my choice as I’m not a fan of goat’s cheese but Mr Nom polished the whole lot off. 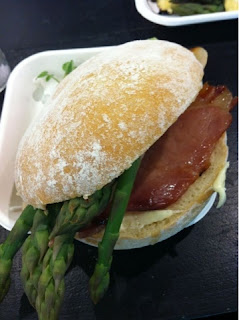 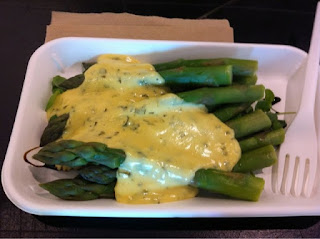 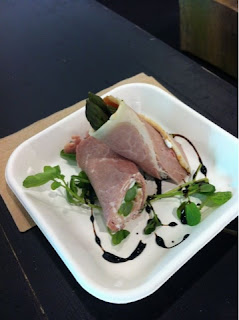 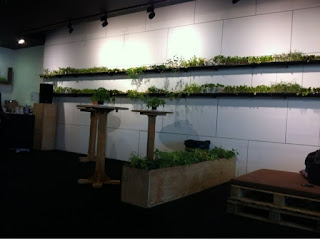 There were two cakes at the counter that I had eyed up when ordering our asparagus dishes, red velvet cake and a chocolate and beetroot cake.  I was set on the red velvet and it proved to be scrumptious!  It was light, extremely moist and most importantly, not too sweet.  Would certainly like to know who supplied these if they were outsourced. 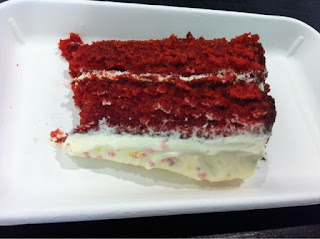 Set to run for six weeks in conjunction with the British asparagus season any fan of the green vegetable would be satisfied by the simple dishes designed to showcase the best of this great British produce.  There is also an opportunity to buy fresh asparagus along with rhubarb and other greenery that I can’t recall right now for home cooking.  So get yourself down there before it closes for the season or you will have to make do with the Peruvian variety with impaired flavour due to vast travel before it hits our shores.
Posted by Nomface at 13:04

Email ThisBlogThis!Share to TwitterShare to FacebookShare to Pinterest
Labels: Liverpool, Pop Up