One of the perks of my proper job is getting to travel to London for 4-5 weeks over the course of the year.  It was on a recent trip that one of most anticipated to do places also turned out to be one of the best and cheapest. BAO London, inspired by Taiwanese street food, has built quite a following around the London street food scene with its little buns of sheer joy.  My plan to sample BAO was to catch them at Kerb at Kings Cross, they also trade at Netil Market on Saturdays at their BAO bar and on Friday Evenings at Street Feast. 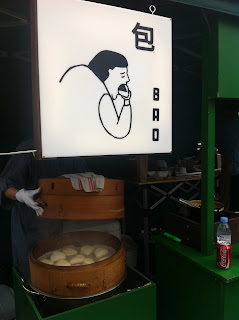 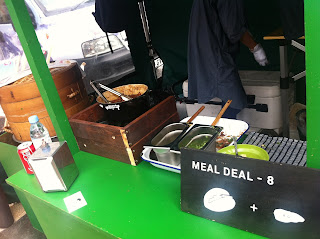 Being a Thursday the lunchtime trip to Kings Cross took longer than I had anticipated but it was worth it in the end.  Kerb run lunchtime street food events at various locations with different vendors each day.  On arrival we walked past interesting Spanish and Indian vans.  However I was only interested in BAO that day, a colleague had his sights set on a rib meat roll from The Rib Man, another famous London institution.  Not being able to decide what to order, the choice was made easier by the meal deal with included one of each from the small three item menu, a snip at £8. 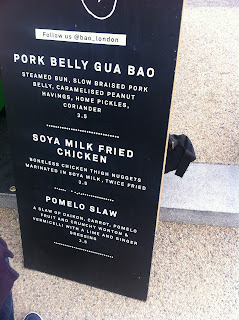 Rather than me describing what the signature Gua Bao entails I'll let the picture below do the talking. 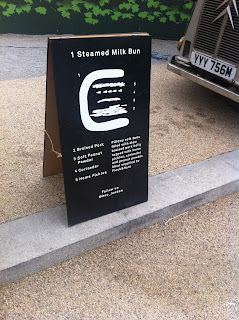 The queue for BAO was by far the largest, although that was maybe due to the longer preparation times needed for the fried chicken which was I was happy to see was made to order rather than made in batches and left to dry out.  Having paid and waiting patiently for my order my colleague had already began tucking into this rib meat roll and it looked scrumptious as well as being humongous, and it was the small size!  I'm definitely going to return for that next time round as I'm told the rib meat was simply divine. 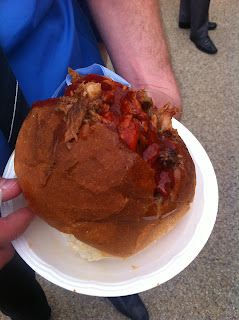 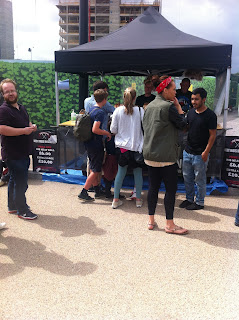 Finally my number was called and after collecting my meal I retreated to one of the bright yellow tables and chairs dotted around the site.  The pork belly gua bao certainly lived up to to the hype.  The steamed milk bun was fluffy and soaked up the sauce, the pork belly melted in the mouth and the coriander and peanut toppings just worked.  The soya milk fried chicken was wonderfully moist inside with the hot sauce providing a kick which the pomelo slaw helped to cool down.  Although next time I think I would order 2 or even 3 gua bao's as they were that good! 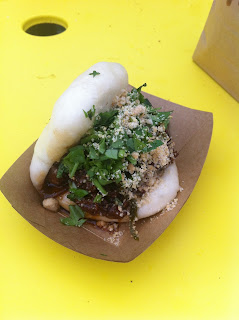 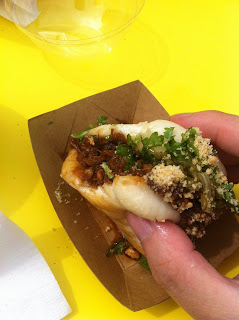 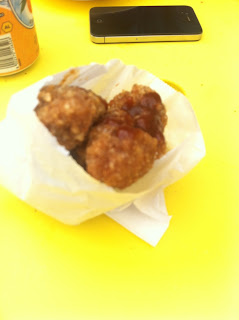 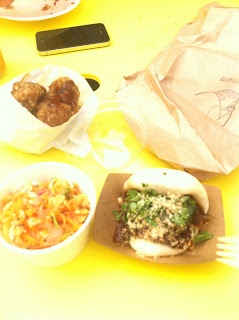 Pictures of some of the other vans. 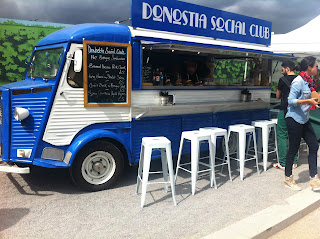 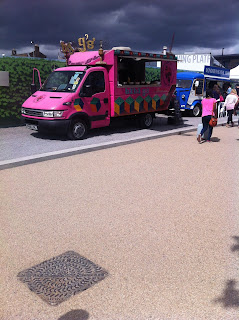