I visited Kerb quickly last week without Mr Nom before my train back home from London.   A great place for lunch, although I couldn’t say a light lunch because I left stuffed, but I’m a bit greedy though! If I had more time I would definitely stay longer and try out more food stalls.  I did not have Mr Nom with me to try out more food as we tend to share dishes to enable to try more stalls. We both love going to street stalls, I like seeing different fusion foods as we feel bored seeing similar menus/cuisines. There is nowhere as special as going to street stalls and trying out fresh flavours. 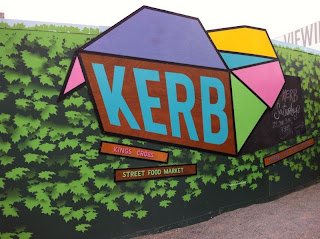 First stop was Kimchinary and I ordered a Korean taco which contained 2 soft corn tortillas with kimchi, sweetcorn and Asian pear salsa, gochujang mayo and toasted seaweed. The tacos came with a choice of either pulled pork belly ribs or slow-braised bulgogi ox cheek (£6.00). The amount of ribs I’ve eaten recently, it was definitely a no-no for me and I went for the ox cheek. 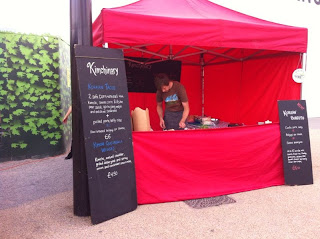 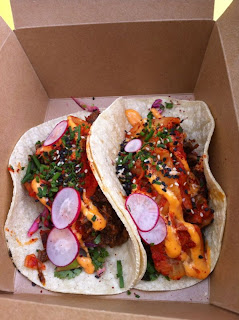 The tacos were lovely; I was actually expecting the kimchi to be a lot spicier. I am not a huge fan of kimchi because I don’t really like spicy foods but the tacos were great. Crunchy veg, tender ox cheek and lovely spice coming from the Kimchi, fantastic combination of flavours and textures.  I also had my eye on the Kimchi quesadilla wedges which had Kimchi obviously, melted Cheddar, grilled aubergine, spring onion and coriander sour cream. As much as I wanted to order it, I had a feeling I would not be able to conquer it on my own as the quesadillas are generally too filling for me.

With one snack down, I was deciding what next… Tea & Crumpets, Bocaface (Spanish food), Tacochu, BBQ lab?  Next to Kimchinary, Tacochu caught my eye. I was debating whether I wanted the beefy taco rice, one of the guys at the stall offered me a sample of it on a lettuce cup and it had me sold and I ordered one at £6.50, with an extra 50p for the addition of guacamole. I managed to plough through two thirds of it and before I was defeated. There were a few nachos in one corner and generous dollops of sour cream, salsa and guacamole. Underneath all the sauces, grated cheese and the lettuce were the minced beef and the rice. A very fulfilling lunch or snack! I also liked the use of plum tomatoes in the dish.  I was envious that Mr Nom tried Bao the following day at Kerb but all the more reason for to return. 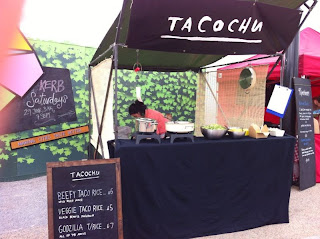 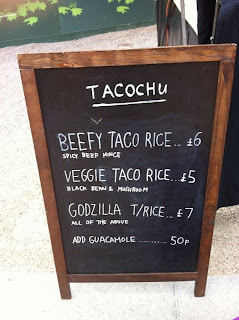 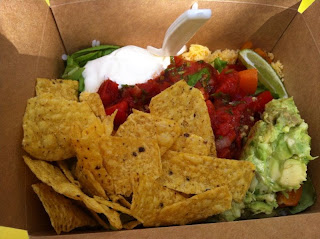 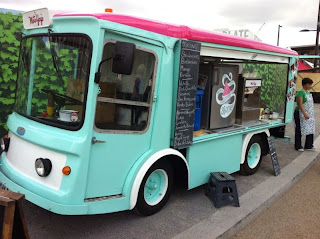 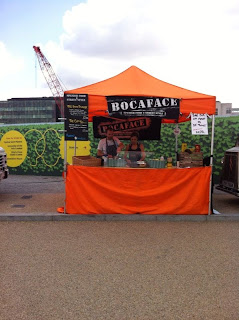 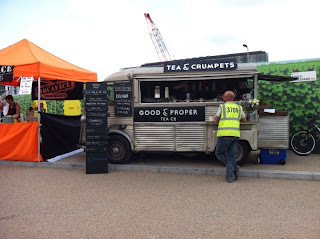 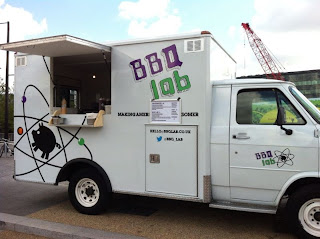