This will be the first in a series of posts about the various breakfasts we have experienced in the last few months in Liverpool.  These include the Interesting Eating Company, Tavern, Delifonseca, and Carluccios.  We have previously posted on the breakfast from Leaf here.  This post focuses on Brink situated on Parr Street.  Being a dry bar Mrs Nom was excited with all the non-alcoholic smoothies and cocktails on offer.

The place was bigger than I had imagined and featured an outside sitting area and a small stage inside, similar to Camp and Furnace on a smaller scale.  I settled for a Brink Big Breakfast which was basically a full English and Mrs Nom chose the American which was pancakes with syrup, scrambled eggs and bacon.  The price of the food was very reasonable with both breakfasts costing around £10. 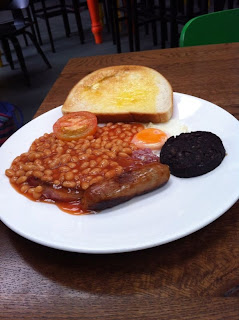 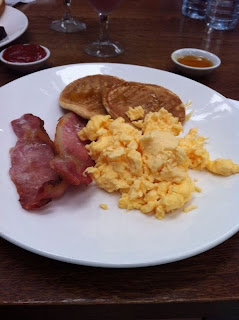 When the food arrived we noted how well cooked each of the individual elements of the breakfast was.  The egg was perfect with no browning on the white and a runny yolk, the black pudding was shallow fried just right with no crunchy exterior and the sausage and bacon was also cooked well.  The thick toast came buttered and was ideal to mop up the sauce from the beans.  The mushrooms were sent a few minutes after, we didn’t even realise until that point.  Mrs Nom unfortunately felt the pancakes were bought in scotch versions; however she seemed to enjoy them anyway. 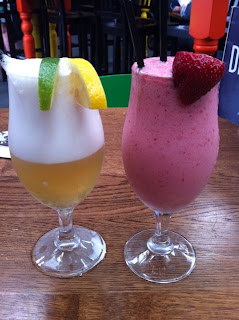 With a big variety of alchoholic drinks on offer Mrs Nom settled for a Strawberry Dream smoothie which comprised of strawberries (surprise surprise), strawberry ice cream, milk and cream soda.  I chose the Drivers Dream cocktail of pineapple & apple juice, elderflower & apple cordial with sparkling water and fruit.    The Strawberry Dream was a creamy delight and the Drivers Dream was refreshing albeit it was nearly half foam.  There are plenty more concoctions that we will return to try, especially as it seems that I’m the one that drives!