In the mood for ramen I attempted to catch a quick bowl after work one night at Bone Daddies, a black fronted ramen shop on Peter Street in Soho and quickly done a u turn when I saw about 30 people queuing outside.  I don’t know why but if I can’t have something then it makes me want it more and I duly returned the next day just after the lunch crowd to a half empty restaurant.

I had already decided on the tonkotsu ramen and give the menu a cursory glance.   The tonkotsu soup base was a 20 hour pork bone broth which was very rich, almost creamy and deep in meaty flavour.  It was much better than the version from Shoryu a few months prior, which was thin and bitter.  The ramen was topped with spring onion, chashu pork, a Clarence court egg, bamboo and bean sprouts.  If I had one criticism it would be that the portion of ramen was rather stingy for the £11 price.  Also the ramen was cooked just a little too soft for my personal tastes.   However the broth was intense and worth the trip. 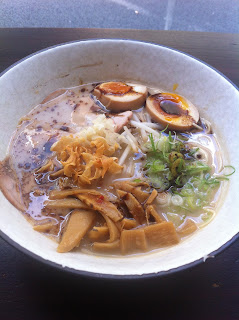 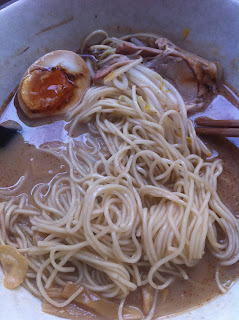 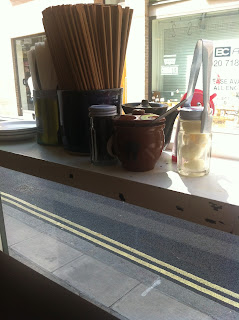 The next time I visit to fulfil my ramen fix will have to be with Mrs Nom as there are some sides and specials that I couldn’t finish alone. Particularly the soft shell crab as I am a big fan and was disappointed by the oily version served up by Shoryu.  Next ramen stop will be to try Tonkotsu on Dean Street.