Having seen the hordes of people queueing for the Shake Shack in Covent Garden at the launch and weeks after I decided to check out what all the fuss was about.  With sizeable indoor and outdoor dining areas the rent for the floor space must be astronomical.  I would later understand how the whole venture was viable.

We visited on an overcast Thursday evening and thankfully the queue was only some twenty deep and it moved along swiftly.  Umbrellas were handed out to those who wanted them; luckily it was only drizzling for a little while.  Menus were also provided to combat queue boredom.  The windy queue is right in front of the outdoor dining area and this helped me to decide what to order by ogling the orders of all the patrons.  The crinkle cut chips looked different and tempting, although without the cheese topping as that looked a tad too unhealthy with my eating habits lately.

All of the burgers were served in paper wraps so that you could see and eat them without too much mess.  I decided on a double ShackBurger which came simply with lettuce, tomato and ShackSauce.  Soon it was our turn to order and I chose a standard vanilla shake to go with the burger and crinkle cut chips which came to the grand sum of £14.50 for essentially a better quality version of McDonalds on a tray.  Only in London would this work as at these prices I don’t think anywhere else in the country would pay those sort of prices for self-service fast food style food.  My dining partner chose the SmokeShack burger which added Wiltshire cure smoked bacon at a £1.50 premium over my £7.50 double ShackBurger.  Compare this in comparison to the £9 Honest burger (see post) which comes with a generous portion of house chips. 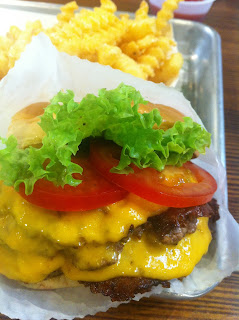 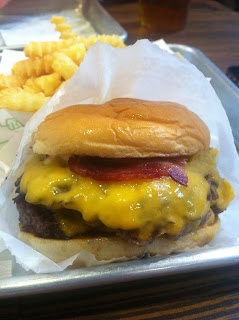 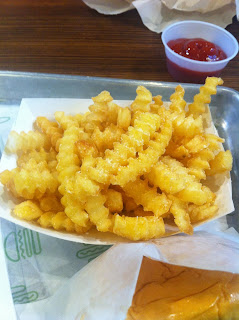 A buzzer was provided to alert us when our order was ready as we went off in search of an indoor table.  We had to lurk over some tables who had finished but this is the norm in fast food places.  People generally get the message and give up their tables, it’s a constant circle and we were subjected to the same treatment when we had finished our food.

My burger was pleasant enough but I somehow felt underwhelmed.  It was clean and perfectly adequate, the thin patties were moist and beefy and just what you want from burger.  The chips were also well fried and crisp on the outside.  The vanilla shake was a let down and was rather bland and non descript, I’ll get flamed for my next comment but here goes….. I actually prefer the shakes from the golden arches.  Overall the food is simple and executed as expected but the whole build up, anticipation and hype seems to be overplayed and bigger than the actual product, good PR I guess but doubtful I will return.  Not that it matters as there are hundreds of tourists to take my place every day.