We have heard fantastic reviews of The Ledbury, but with 2 Michelin stars and placed 13th in the San Pellegrino 2013 top 50 restaurants in the world we expected it to deliver, and deliver it did.  This was our second experience of a 2 Michelin starred restaurant and expectations were high along with the two month wait since booking increasing the anticipation.  We chose to visit  during a Sunday lunch sitting as this seemed to give the best value at £50 for three courses with a selection similar to the normal weekday a la carte menu at £80 for three courses including some of the signature dishes.

Navigating our way from Westbourne Park tube station through the leafy suburbs of Notting Hill we eventually located within a residential area using our trusty iPhone.  The restaurant was smaller than I had imagined and there are many mirrors on the walls to create an illusion of a bigger space.  After a warm reception we were led to our table where Mrs Nom was offered a bag hook for her bag which was a nice touch. 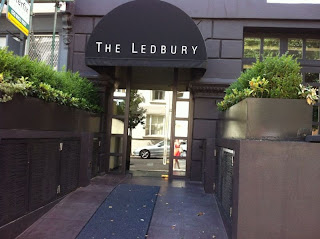 Whilst perusing the menus and deciding what to have we were presented with squid ink crisps with smoked turbot roe which were full of flavour.  Leaving a pleasant lingering taste on our palates, so moreish, we could have both eaten a few of them!  Of the bread selection the bacon and onion brioche seemed the most enticing and it was lovely, crisp and warm. Mrs Nom did not need the extra butter because it was already so buttery. 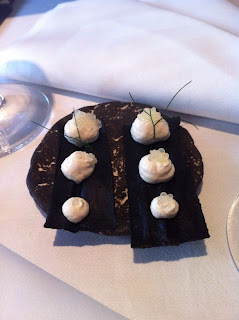 For starters I chose the flame grilled mackerel with pickled cucumber, Celtic mustard and shiso. The presentation of the dish was beautiful; the blue plate looked lovely, contrasting with the green from the pickled cucumber. It looked so appetising and equally tasted just as good.  I have been choosing a lot of mackerel dishes recently; always a great dish for a light starter. 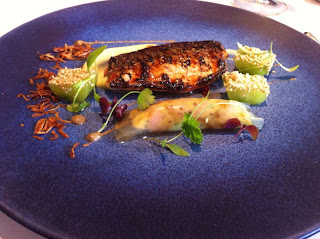 Mrs Nom chose the roast hand dived scallops with sweetcorn, girolles and summer truffle. Recently she has had great scallop starters but this one was the best yet she proclaimed! The scallop were cooked perfectly, the sweetness from the sweetcorn balanced well with the scallops and the use of girolles were great too. The truffle just finished off the dish with its aroma. This was the ultimate starter for Mrs Nom, all of the best ingredients she loves on the same plate. The sauce was mouth-watering, intense and drinkable I am told! 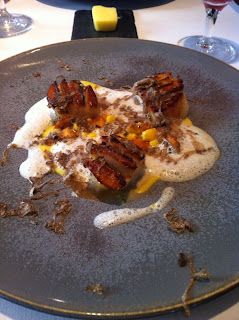 For the main course I had my heart set on roast breast and confit leg of pigeon with beetroots, blackcurrant and banyuls which turned out to be mesmerising. One of the best cooked pigeon dishes I have ever had; the pigeon breast was cooked perfectly pink and rare.  The elements all worked immensely well with one another, especially the pigeon with the blackcurrants, tangy and a wonderful combination.  I was happy to see that the deboned confit legs were served alongside an offal skewer, using all parts of the pigeon. 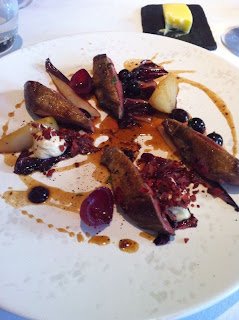 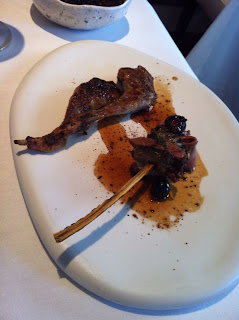 Mrs Nom chose jowl of pork with white carrots, black pudding, endive and gooseberries.  The pork was fatty goodness topped with nutty flavours, crumbs of black pudding and gooseberries. The explosion of different flavours with the tender pork was spot on but I preferred my pigeon dish.  One point I noticed was that the food was presented in a simple way but delivered on flavour and all components were extremely well prepared and cooked.  Whilst some places compromise on flavour in order to create artistic masterpieces. 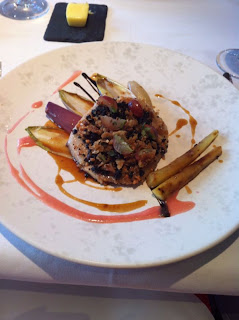 For dessert again I had already made up my mind on the passionfruit soufflé and sauternes ice cream.   Mrs Nom was undecided and asked for recommendations to which the brown sugar tart was suggested.  However she still stuck with her first choice of olive oil panna cotta, wild strawberries, watermelon and citrus beignets after being reassured that the olive oil was not overpowering and added a fragrant touch. 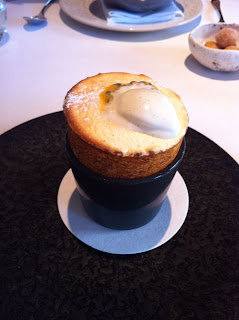 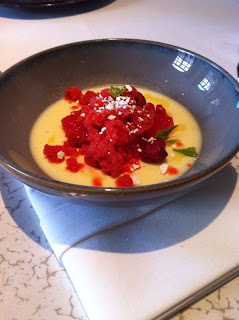 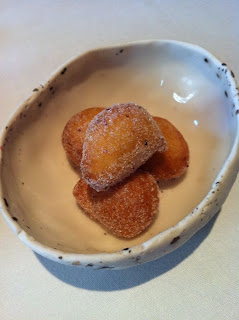 The soufflé was quite big and a spoonful of ice cream was served at the table, pierced through the soufflé and melting through the dessert. The passionfruit was refreshing and zingy, and everything I expected it to be.  The panna cotta was also a delight, the drizzle of olive oil was wonderfully aromatic, it was an interesting dessert with wild strawberries, pieces of watermelon and watermelon granite which was refreshing and cleansed the palette for the citrus beignets on the side. The beignets were so so and lacked the citrus billing.

We ended the meal with coffee and petit fours.  Mrs Nom loved the cup used for her latte, and we were told it was from Jing.   The petit fours included a blood orange jelly which was slightly too sweet, chocolate with eucalyptus which reminded us of After Eights and a juniper cookie with caramel which was the best of the lot.  A return for the tasting menu is definitely on the cards after this wonderful lunch. 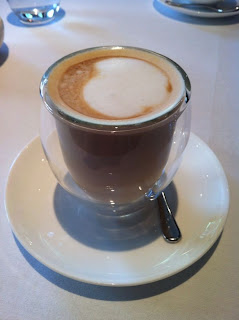 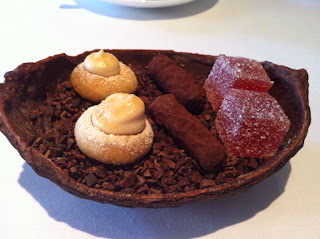