The popularity of Burger & Lobster shows no signs of slowing down anytime soon, with huge queues most nights and soon to open its fifth restaurant within Harvey Nichols this London juggernaut brings lobster to the masses, and burgers but we’re not interested in them as it’s all about the lobster.  I have been to the Soho branch a couple of times during weeknights with at least an hour wait each time.  Being an avid fan of lobster the menu is short and simple either a steamed or grilled lobster with fries and salad or lobster roll/burger and the same for £20 each (plus service charge).  Apart from the cooking method the other choice is to upgrade to a larger native rock lobster for a higher price depending on how greedy you are.

There is a small bar waiting area where you can enjoy drinks whilst you wait to be called to your table.  The drinks are quite pricey and the bill soon mounts on top of the value lobster meal. Bibs are provided for the messy ones and provide some entertainment. The food is served swiftly, understandably given the price and turnover required but we did not feel rushed to finish our meal. 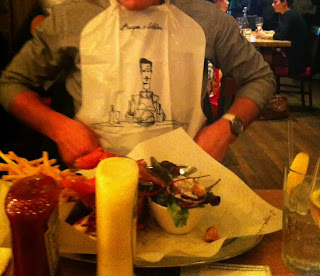 I opted to have my lobster grilled, served whole including claws the way it should be, I always feel short changed when they are not served as the claw meat is my favourite part.  It is served with lovely garlic butter for dipping the lobster and fries.  A shell cracker and pick are provided to get all of the meat out of the nook and crannies, it takes a few goes to become efficient at lobster eating but it’s worth it. 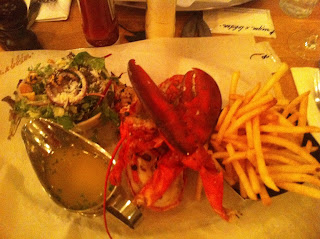 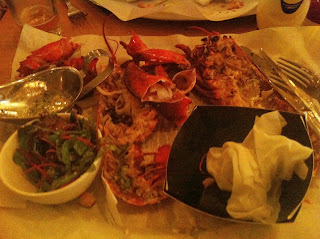 The burger looked good and I was told it was nice but at £20 seems a bit steep.  I’ve not tried the lobster roll yet but for the same money I could get both a succulent lobster roll and lobster mac n cheese from my favourite London lobster joint, Bobs Lobster.

There are a few restaurants with the same concept which have popped up, most notably Steak & Lobster (formerly Alto) based in the Radisson Edwardian, Manchester.  Here we tried the lobster but it was under grilled and some of the meat was still mush.  Alternatively any decent Chinese restaurant such as Tai Pan can do spring onion and ginger lobster on noodles which will fulfil any lobster cravings.