Not being able to heed the advice to arrive as early as possible to the 5.30pm opening time we joined the back of the 20 strong line outside at half past six.  We were unsure how long the wait was but queued patiently and within half an hour we were near the door and another half an hour to be served drinks inside and then another ten minutes before we were seated downstairs.  It was only when we were led downstairs that we understood the length of the wait.  We counted space for 18 diners downstairs, some seats not utilised because of parties of three with another 6 or so upstairs in the bar area.

As the people ahead of us in the queue slowly whittled down we edged closer to the window with the menu which felt like a milestone increasing our anticipation of the smoked beef ribs that we had come for.  I had decided on the beef ribs with bone marrow mash.  As we edged nearer to the door we could smell the unmistakeable aroma of a good BBQ and the hunger levels increased and dispensed with our thoughts of leaving to find food elsewhere. 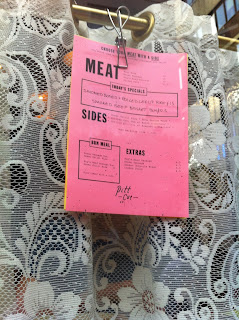 Before too long we were ushered inside the bar of the corner building at 1 Newburgh Street, Soho.  The queue had since doubled behind us and a constant stream of people entered the bar area citing the number of people in their party to be directed to the back of the queue.  It was amusing to see the looks on their faces when given an estimated waiting time.  A no reservation system is a fair system which allows for quick table turnovers as long as there is a queue, and there is no shortage of one here.

The downstairs dining area was compact with barely space for the tables and an adjoining toilet, complete with a large tube for ventilation which reminded me of old school tumble dryers and the tube that used to dangle out the back of ours.  We decided to start with the chipotle chicken wings and what arrived were delicious wings that soaked up the flavour of the sauce. 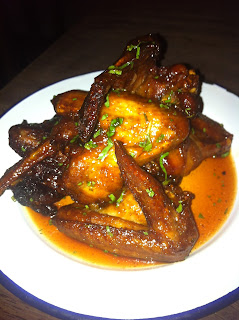 The main event arrived and I was not disappointed, my beef ribs were big and beefy and smoked to perfection on the outside with the meat inside radiating pink yet cooked through.  I had to turn the flash on my iPhone to get a decent picture and drew some looks from fellow diners; this limited me to a few pictures missing the pink goodness of the beef rib meat.  There was only one way to eat the ribs and this was to dig in without cutlery which made it even more satisfying.  The bone marrow mash was a game accompaniment to the ribs along with a small serving of coleslaw. 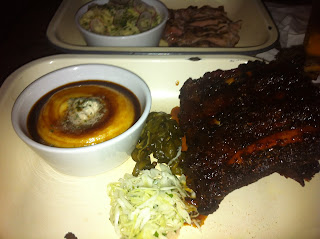 My colleague chose the special of smoked bone and leg of pork with green chilli slaw.  We overheard how special the cut of pork was it certainly delivered on the taste test.  The quality of the pork was undeniable and it rivalled the jowl of pork I had sampled at The Ledbury a week before. 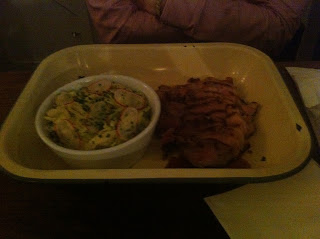 As small as the venue is we never once felt rushed and this showed in the wait for the food which was a good five minutes from finishing the chicken wings.  This means that the chefs can concentrate on ensuring quality rather than trying to send out as many plates as possible, although I’m not sure how the kitchen could handle serving more diners as it takes time to smoke the ribs.  One things for sure arrive early to avoid the long queues and even being disappointed as they do sell out. 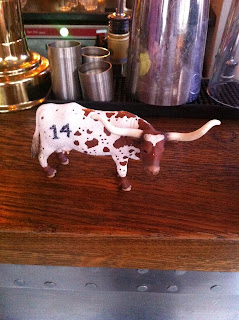 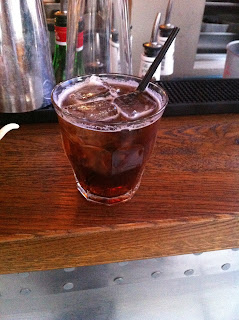 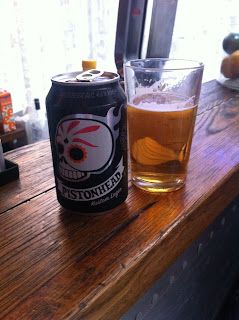