Cibo in Didsbury has been a restaurant Mr Nom and I have been meaning to go to for a while, discovering it served Venetian tapas; it was definitely a place we wanted to visit.  Finally we found a chance to go for a light lunch before my Masters graduation. The interior of the restaurant was modern and stylish, a great spot for a couple of drinks and nibbles.

With not a lot time we went for the lunch deal which at £10 for a selection of 3 cicchetti, any dish and side from the main menu is a good deal.  There were six items on the cicchetti menu so we ordered one of each which consisted of stuffed artichoke wrapped in lardo, aubergine ball, arancini sicciliani, scamorza wrapped in speck, baccala montecato and crostini ricotta broad bean & mint. 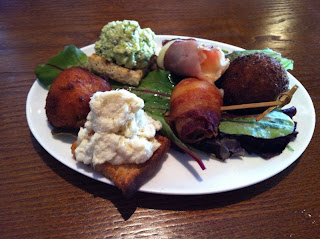 The cicchetti was presented nicely, little bite sized morsels, to my surprise the aubergine ball was really flavoursome which I was not expecting. The arancini was delicious as well, one of Mr Nom’s favourite nibbles. The crostini was a perfect fresh and light snack. I could happily eat more of them!

From the main menu we ordered the braised octopus, stuffed belly pork and lobster ravioli as an extra dish. My favourite tapas would have to be the ravioli lobster. The sauce was brimming with flavour and the ravioli was well made.  My least favourite was the octopus as I found it a little tough, possibly because it was braised. However the stuffed pork was delicious and the crackling was nice and crunchy. 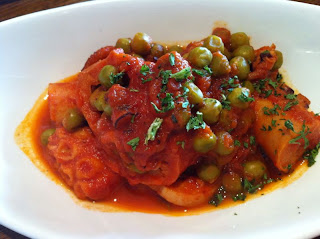 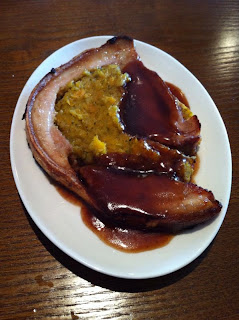 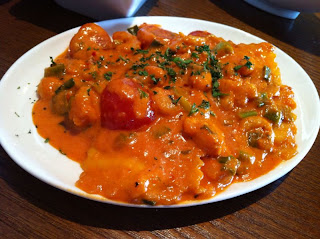 For our sides we ordered the zucchini fries and the rosemary roast potatoes which came in generous portions, I kept mopping up the delectable sauce from the lobster ravioli with the sides. 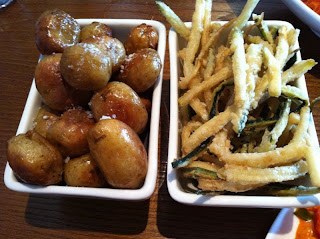 A new menu has recently been launched and I already have my eye on a few dishes that I want to try. The swordfish carpaccio, octopus salad and the monkfish are amongst the new dishes which have sparked my interest.  This always happens; as soon as we visit somewhere then new menu items are launched not long after, all the more reason to return! 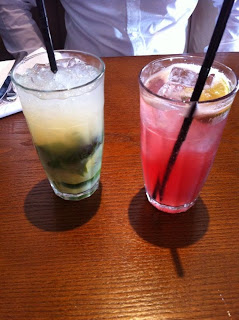