We made our booking for the first Friday evening service of Manchester House some time ago when bookings were first released.  Having recently seen Aiden Byrne demonstrating two dishes from the menu at the Liverpool Food & Drink Festival it heightened our anticipations.  I must admit when the price for the tasting menu was announced at £95 per head we considered going a la carte but settled for the 12 course taster menu in the end.

Being new it was inevitable that the restaurant would be still finding its feet, having been advised that canapes and drinks would be taken at the lounge before the meal we made our way to Tower 12 in Spinningfields early.  We were greeted by a posse of staff including security, endless hosts and even lift operators.  When we reached the lounge the lighting was pretty dark which made reading what was on the bar menu a chore.  Eventually I settled on an Old Fashioned Whiskey.  This arrived in a glass bottle and left to smoke to taste. 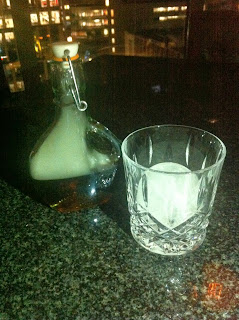 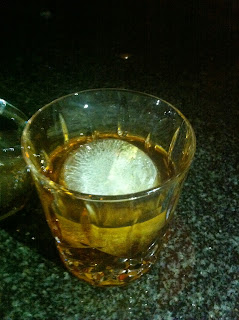 Canapes were served which included langoustine presse, beetroot and foie gras macaroons and red pepper tuille.  So far so good with my favourites being the macaroon and tuille.  We were then led downstairs to our table after passing through the open kitchen where we spotted Aiden Byrne at the pass.  First impressions of the restaurant were that it was spacious with a sophisticated warehouse modern design. 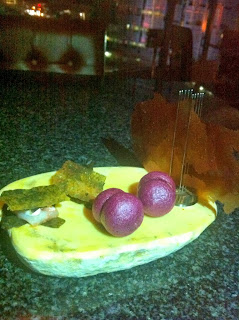 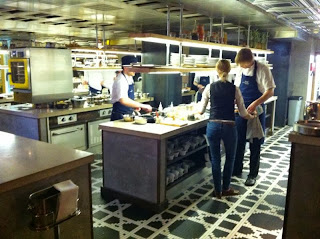 Straight into the tasting menu the first course was bacon brioche, pea butter and a pea shot. Whilst perfectly enjoyable with a muffin like texture compared, it is unfortunate that the buttery and flaky version from The Ledbury was fresh in our minds from last month and skewed our opinions.  The pea shot reminded me of the water left over after boiling peas, although not that I drink that and this was much nicer although not as intense as I had expected. Three sets of cutlery were then laid out and we were informed that three appetisers would arrive promptly one after the other.   First up was a fresh and cool chilled broad bean soup with goats cheese and balsamic.  This worked well together and I could of lapped up a big serving of this, although probably not the best idea with the goats cheese. 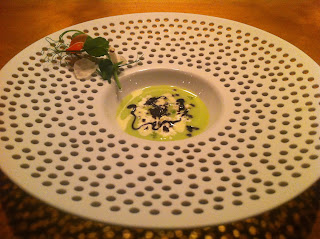 The third course was razor clam, squid and pepper.  The yellow pepper sauce was intense and the morsels of razor clam and squid were tender and fresh.  The small cubes of squid ink jelly didn't add much and were overpowered by the yellow pepper. 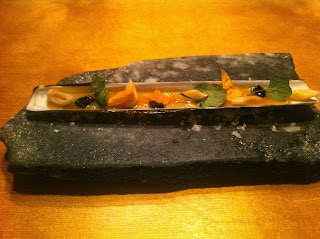 The next dish was outstanding, braised snails, potato and parsley.  The snail was plump and and delightful with the parsley sauce.  However despite the plural for snails we only had one each.  The next day I found out that a well known food blogger had 3-4 plump snails in the same dish.  I was quite annoyed as the food should be consistent and there is a massive differential here.  We both pay the same for the food and I expect to be served the same, if there were issues with produce on the night leading to stock shortages then surely the dish could be substituted rather than an under par serving leaving me feeling short changed.  A victim of your own success, if the dish wasn't so good then I wouldn't be so annoyed! 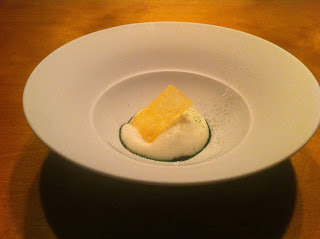 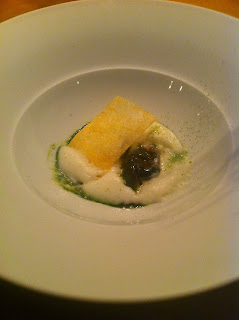 Before deciding on the tasting menu, we toyed with the idea of creating our own by ordering multiple a la carte dishes due to me wanting to try the pigeon dish which has had rave reviews. The tasting menu lists this course as foie gras, palm sugar, cherries and pistachio and I didn't know this was the pigeon dish until I saw the menu card at the restaurant which read, pigeon, foie gras, palm sugar, cherries and pistachio.  With this cleared up tasting menu it was. Our server mentioned a surprise ingredient on delivering the dish but this was already revealed on the menu!  Anyway the dish lived up to its praise so far and was well constructed in its flavour combinations and execution.  The pigeon breast was cooked perfectly pink and tender throughout and worked with the freeze dried cherry and foie gras inside the mock cherry,  with the pistachio adding some crunch to the dish.  The starter version we were told comes with a larger breast and pigeon leg which has sparked out interest on a return visit. 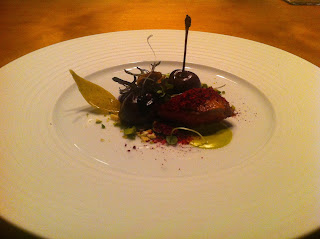 The next dish needs no introduction as it will have been seen by millions from the Great British Menu, a playful take on a prawn cocktail.  Encased under a passionfruit dome once cracked this revealed the prawns underneath.  The dome was slightly too sour for Mrs Nom but I thought it was just right,  although the macerated powder was a bit strong for me. 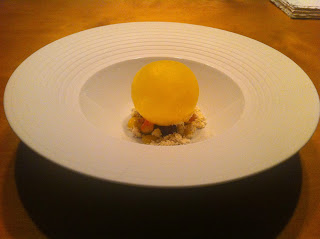 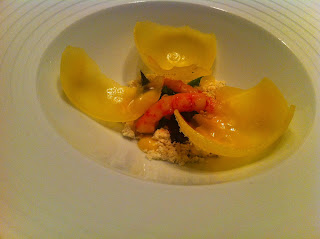 The next dish of oyster, oxtail and beetroot was one we had seen Aiden demonstrate before and even had the chance to try.  The beetroot infused oyster was a delight and Mrs Nom being a huge fan of oysters lapped it up.  The oxtail consume was strong and intense however the chunks of oxtail were a tale of two sides, one was tough as boots with no taste and the other was tender and beefy.  This was served with an oxtail doughnut and samphire and oyster emulsion, this didn't do much for me and the dough was much too thick for my liking though the emulsion was new and interesting which the dough needed. 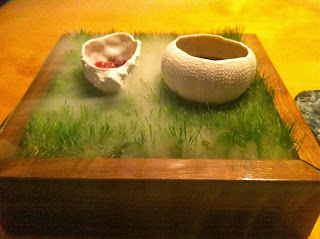 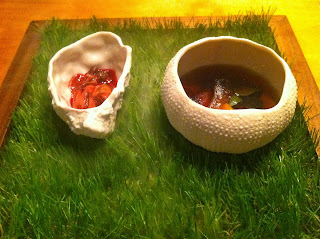 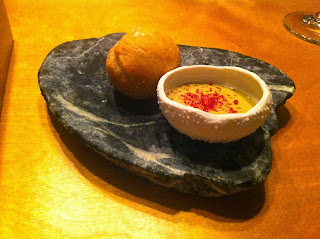 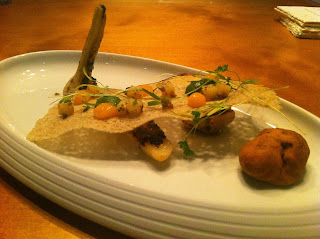 Another dish that we had seen demonstrated by Aiden was the turbot with morteaux sausage and choucroute.  Cooked in a water bath the turbot was firm and infused with fermented cabbage.  One of my favourite dishes of the night. 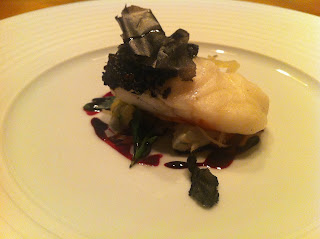 By this point I was yearning for a strong savoury slab of meat type of dish but sadly the pork dish with pineapple and rose cream was not it.  The perfume taste of the rose was too much for the pork.  The outer edges of the pork was quite dry but it was moist towards the middle.  Its just that I'm not a great fan of pineapple and meat combinations. 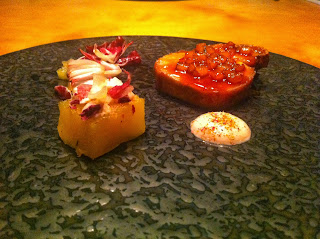 The first dessert course was Szechuan, lychee and rose although presumably Szechuan peppercorns.  This was never stated and just the word Szechuan was used repeatedly to describe the dish, Szechuan is a whole cuisine so was a bit miffed.  The dish was boring and safe for me with no kick coming from the Szechuan inspiration. 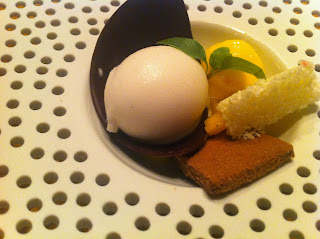 Service was beginning to become rushed at this point and the last course was described as just a take on the Manchester tart, not being from Manchester I didn't and still don't have a clue what the original consists of.  The better of the two dessert courses the layers and flavours were interesting. 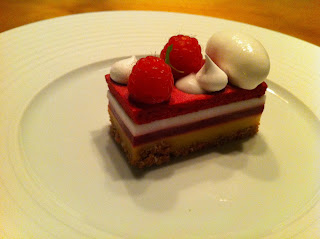 By now it was nearing half twelve and I was yawning after being in work all day beforehand. We were presented with an assortment of flavoured macarons with tea, which were very kindly boxed up for us to take home. 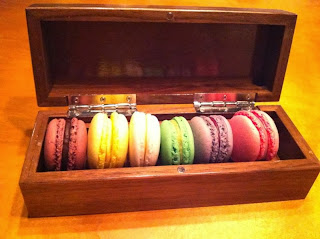 Whilst this was an enjoyable meal, to reach the star status that Living Ventures craves for its crown jewel; the service we encountered needs fine tuning and for all staff to be singing off the same hymn sheet.  One of my main issues pre visit was the lack of response to email and Twitter enquiries sent to Manchester House, it seems they are very selective in who they respond to and I didn't once get a response.

On calling the restaurant to enquire on the extended a la carte option on the a la carte menu I was abruptly told that you could choose extra courses for a supplement.  I assumed this was an extra starter but didn't quite understand how the pricing worked as this option was £15 and the starters hovered around this price.  I clarified this at the restaurant and was told that the extended a la carte option basically includes the first three courses from the tasting menu we enjoyed being the bacon brioche, chilled broad bean soup and razor clams.

Our server to her credit was very patient and answered the majority of our queries on the menu, however not all staff members displayed this and some seemed rushed when engaged.  Small details like this are picked up by patrons and consistent service is to be expected in fine dining establishments which Manchester House is trying to achieve. However with time and experience, as long as staff are retained with low turnover this should improve and needs to in order to match the efforts of the kitchen.

To be really picky, when I got home I noted that the receipt listed the dishes that we had and this totalled 14 courses including a beetroot gazpacho and ajwain cracker which we definately never sampled.

I read somewhere that there are over 70 members of staff over the two floors covering the restaurant and lounge.  On leaving it become tiresome and overwhelming answering five different people (our server, gentlemen who bought our bill, host who retrieved our jackets, lift operator/security?, downstairs host) on if we enjoyed the meal.  It will be interesting to understand the costs involved in running the operation especially staff costs as there are so many peripheral numbers of staff.

For the first week, overall we had a good experience in the restaurant and would return for some of the a la carte dishes I have my eye on, in particular the Welsh black beef dish for two and the milk and honey dessert.  Although hopefully by then management will realise less is more and it won't be necessary to pass through so many levels of staff and the other service issues highlighted above are ironed out.  It would be a shame to have the service spoil the food which at this early stage is highly promising.