Ever since coming across the famed bone marrow starter dish from legendary St John in Clerkenwell, London, it has been on my hitlist.  One thing that interested me was the nose to tail philosophy of the restaurant, which holds 1 Michelin star and are ranked 71st on the San Pellegrino 2013 world restaurants listing. Being of Chinese heritage I am used to eating all the innards and outer parts of various animals.  Many of my friends display utter disgust at simple shellfish and absolute terror at pig intestines, tripe and chickens feet.  I tend to try anything although there is something about whole fish heads which makes me want to puke.  Getting back on track, you are more likely to find trotters, sweetbreads and game on the menu at St John.

The white coated uniform of the servers reminded me of the evil doctor from The Human Centipede.  As planned I started with the bone marrow toast.  This was served as four bone segments with a parsley salad and a spoonful of rock salt on the side.  I was told to top the toast with bone marrow and parsley leaves before sprinkling with salt to taste.  The bones were served extremely hot and extracting the marrow with pick was a messy job with it spreading all over my hands.  However it was worth it and the dish came to life with the parsley and salt added to the bone marrow topped toast.  A simple and comforting dish but it just works and it is easy to see why this has remained on the menu since opening.  My dining partner chose cured beef with green beans and pickled walnut, a cold starter but lacking the excitement of the bone marrow. 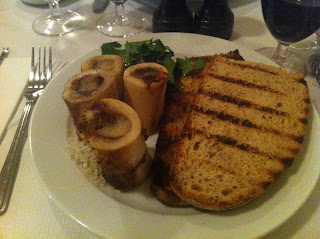 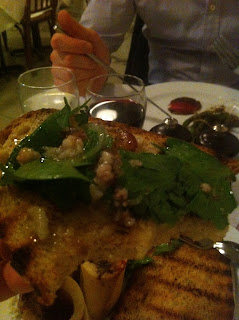 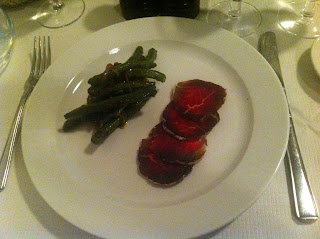 It was the beginning of the grouse season during my visit and a dish simply labelled ‘grouse’ was on the menu.  Naturally I chose this having never tasted it before.  The oven roasted grouse was presented whole and served with bread sauce and offal pate toast.  The meat of the bird was medium rare and pink, the texture was like a cross between duck and chicken.  The breast meat was wonderful but I felt the meat of the legs and wings and towards the carcass to be somewhat bitter.  The bread sauce added little in my opinion and I wasn’t too keen on it.  However I’m glad to have tried grouse and would order it again if served with something sweeter like a blackberry or other fruit sauce.  On the other side of the table was braised lamb, fennel and aioli, the lamb was tender and the fatty bits were melt in the mouth goodness. 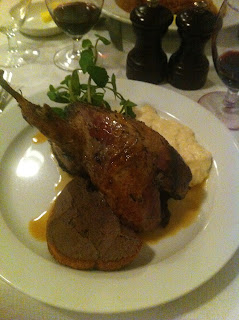 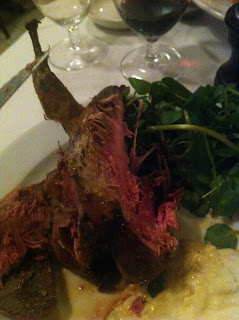 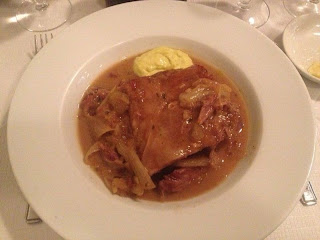 I had my eye on the salted chocolate caramel tart for dessert and the appearance of it was indulgent in itself, presented as a slab of dark rich chocolate wedge.  Again as was the theme, this was simple but satisfying, not too sweet and not overpoweringly rich.  We also had the baked cheesecake and we split each dessert into two, this was quite average and the chocolate tart was the star here. 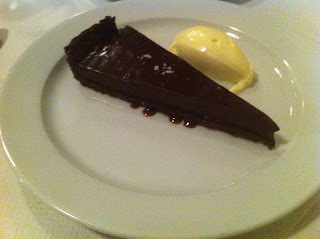 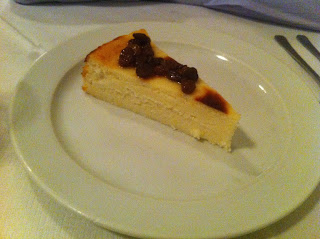 The bill with a glass of wine each came to a shade under £89 service excluded.  The service throughout the night was good and not overly attentive in keeping with the relaxed environment, although some may find it too noisy.  For simple Michelin food without all the wizardry St John provides reasonable value and the bone marrow is a must try.