The belated post to complete the national burger day trilogy from early last week - see posts on Shake Shack and Honest Burgers both from London.  From the fast food style of Shake Shack to the clean and simply good Honest burger, next to complete the set is the Liverpool branch of the ever expanding brand that is Almost Famous and its down and dirty messy burgers.  We have previously blogged about the launch night but we have since revisited a couple of times. Since the launch late July the original post has been our highest viewed page by quite some margin so I guess this revisited post is shamelessy capitalising on its popularity.  The PR from the dislocated jaw girl also sent the hits to an astronomical level for a few days, any PR is good I guess and the news only served to increase peoples interest.

The second time I returned we were sitting with our drinks waiting for the food when we were approached by a guy who introduced himself as Beau when he noticed us taking pictures of the meat slut sign.  After a brief chat he left us to it and after a few days I saw the name Beau Myers mentioned on another blog and realised that he was the mastermind behind Almost Famous.  Good to see he takes an active interest and talks to his punters and we wish them luck as they take the brand to London with its participation in Meatopia. 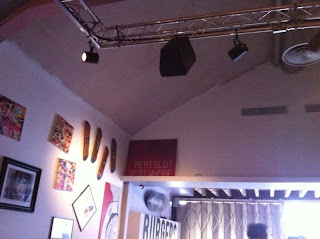 Back to the food, over the course of our visits we have tried nearly all of the burgers on the menu.  In the picture below from bottom working clockwise we ordered the Kids in America, Famous Burger, Triple Threat (even in the background it looms large!) and the River Phoenix. The fries in the middle were the True Romance and the Lucky Pig fries. 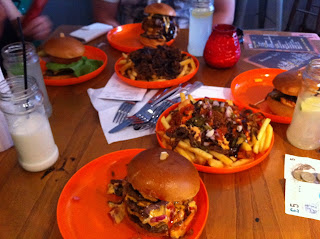 My Kids in America burger was stacked with three patties, candied bacon, cheddar, red onion, jalapenos, chipotle ketchup and famous sauce.  The bun couldn't contain the messy burger for long and soon gave way after a few bites and I finished the rest with cutlery, good messy fun. Despite the messiness theres something deeply satisfying with devouring a dirty messy saucy burger.  In contrast the Honest burger from Soho, London was simple but great beef cooked well and clean to eat.  They both have there good points and it depends on the mood I am in as to which I prefer. 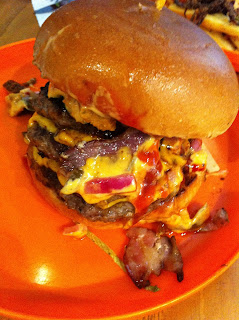 The Triple Threat went down well and nearly defeated one of our party.  Laced with triple patties, triple bacon, pulled pork and redneck sauce it certainly was a behemoth.  The Famous burger was a simple affair with double patties, cheese, salad and Famous sauce.  The selling point with the River Phoenix has to be the BBQ fried onions and frazzled baconnaise. 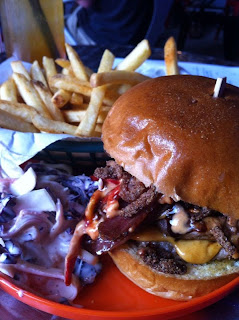 The Lucky Pig fries are topped with a generous helping of pulled pork and is sweet compared to the True Romance fires which packs a punch with its dose of chilli.  I prefer the sweet potato fries which are mixed in with the usual potato variety, wonder if I could order a portion of straight sweet potato fries. 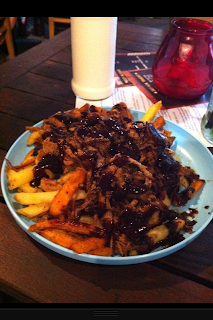 We also tried the suicide wings with added sauce as we wanted to see who could take the hottest, turned out to be a mistake and there was some sustained pain in silence after we consumed them.  Note the chilli seeds in the picture below which delivered most of the heat. 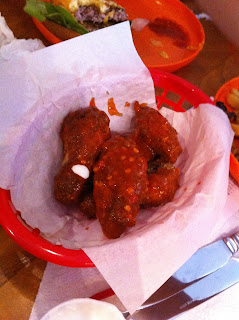 Luckily I had a boozy milkshake to help cool down my mouth.  One of my favourite drinks regularly changed the one I had was rum based. 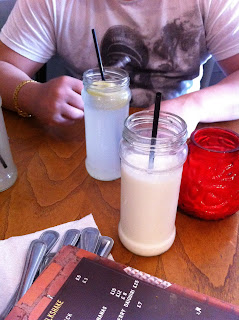 For downright messy and satisfying burgers then Almost Famous has to be one of the premier burger joints in Liverpool right now.  I see they are also taking part in the Liverpool Food & Drink Festival over the coming weekend and look forward to seeing what they are serving up.