The street food scene in London has exploded in the last year bringing accessible quality food to the masses.  Two of the bigger street food events that we follow are Feast and Street Feast, each setting up temporarily residences wherever space allows.  It was the 1st birthday bash for Feast over the last weekend with two of our favourite street food vendors Bao London and Bob’s lobster taking part (both previously covered on the blog).  That was all the reason we needed to book a trip down to the Big Smoke. 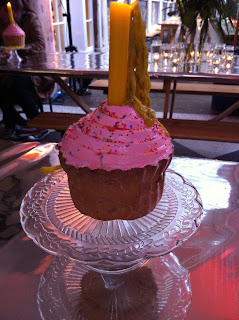 The event was held in the Quadrangle car park of Guys Hospital by London Bridge.  An odd location but a good sized car park for the vendors with covered sitting and garden areas.  The weather forecast didn’t bode well for the Friday that we were attending and the rain progressively dropped harder and harder as the night wore on.  However this didn’t dampen ours or anyone else’s spirits it seems with most Feasters braving the rain to purchase food before diving back under the covered areas to consume and repeat. 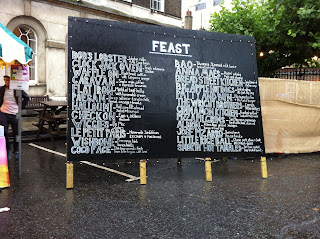 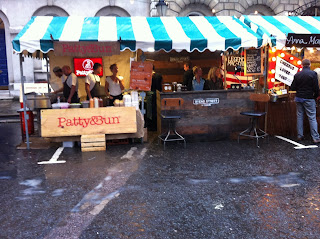 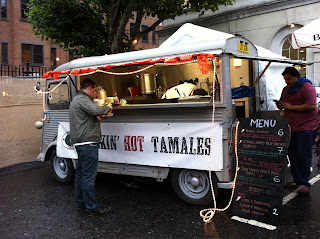 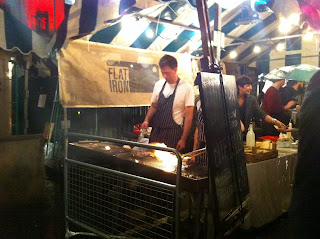 Arriving there just after six when it opened for the evening we decided to go straight for Bao after a short stroll around the square.  It would prove to be an inspired decision as the queues from then on for the whole night were ridiculous; consistently ten deep even in the pouring rain.  The menu for Bao consisted of two items, the classic pork belly gua Bao and the ‘Heart Attack’ chicken Bao which was soya milk chicken fried on a deep fried bun.  We ordered one of each and being a Bao virgin, Mrs Nom was instantly converted with the pork belly Bao.  It gets better each time; I could eat a bucket of the braised pork belly.  The ‘Heart Attach’ Bao was also a delight, the deep fried bun reminded of a Chinese dim sum classic, the deep fried custard buns.  The chicken was still moist inside and the hot sauce finished it off nicely.  At £3.50 each I can’t think of a better snack for the same price. 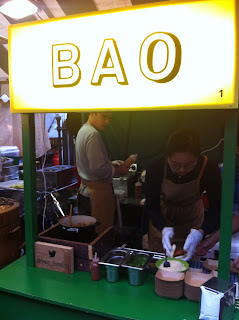 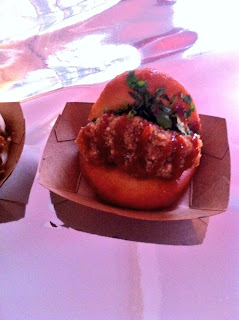 We moved onto to Anna Maes and decided on the Piggy Smalls, mac n cheese topped with pulled pork, bbq sauce and pickled red onions, served with a mini bottle of tobacco sauce.  Billed as legendary mac n cheese it was good with quality cheese coating the macaroni. 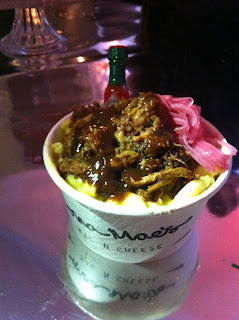 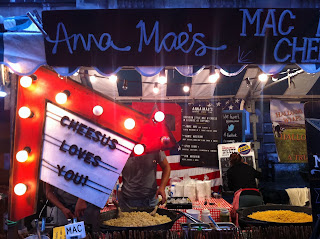 Catching my eye next to Anna Maes was Bread Street Kitchen with its fried tamarind spice chicken wings flying out by the plate.  I couldn’t resist and ordered a portion and they were very tasty with the tamarind embedding into the skin and meat.  Next to Bao was revered chef Jose Pizarro and his offering of Iberica jamon with tomato bread.  The slivers of jamon oozed quality and the tomato topped bread was refreshing. 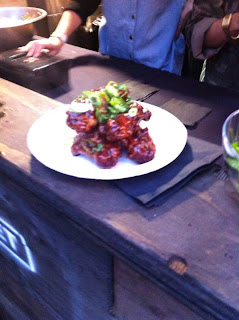 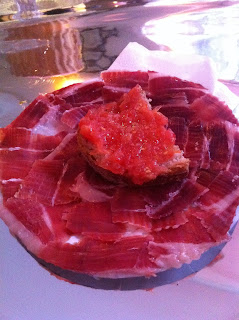 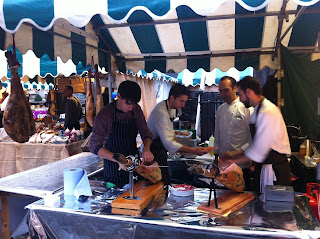 Steering clear of burgers as we’ve had too many lately with the latest being the ramen burger at Solita, Manchester the night before, there was a Patty and Bun offering which seemed quite tempting and pulled pork sliders at Wiggies.  To compensate I ordered a portion of pork crackling with rhubarb relish from Wiggies, they were certainly tough and crackly with glorious pork fat.  We noticed a stall selling unique rice balls and chose one of each, marinated salmon and wakame, and Japanese plum and miso pickled cucumber.  Whilst different we found them to be quite bland. 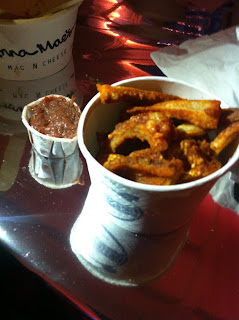 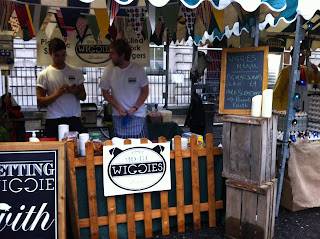 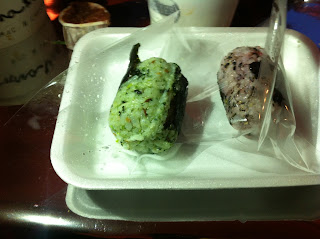 Moving on to desserts we had our eyes on a black forest waffle from Waffle On and the Eggs n Soldiers from Check On.  The black forest waffle came with poached cherries and a rich chocolate sauce that was very additive.  The Eggs n Soldiers were cute served in hallowed out egg shells with vanilla crème brulee and mango jelly with a shortbread finger.  Always a sucker for crème brulee they too were very additive and not too sweet.  Still feeling peckish we ordered a tried and trusted lobster roll from Bob’s lobster, this was packed with huge amounts of lobster meat and was as succulent as we had remembered it to be from before.  We headed off to nearby Hutong in the Shard after this as some rest bite from the rain. 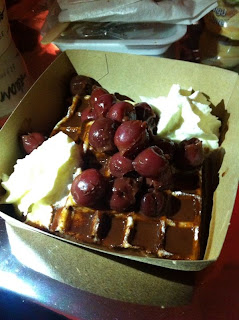 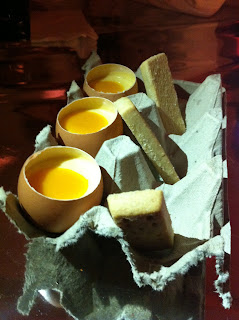 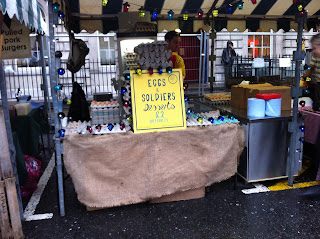 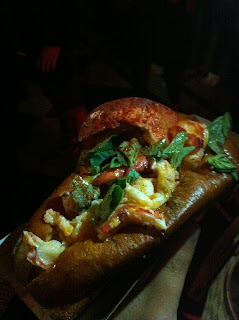 We returned the next day in better weather for a quick snack before heading home and sneaked in another pork belly Bao.  We took the opportunity to introduce ourselves as the guys who Bao often retweet and were surprised that they remembered us as the couple who turned up last month at an event to find them shutting up shop early after selling out.  Next time we will definitely try and make it to the Bao Bar in Netil market which opens on Saturdays.  The tongue and crackling congee only available at the Bao Bar on the sit down menu seems particularly appealing. 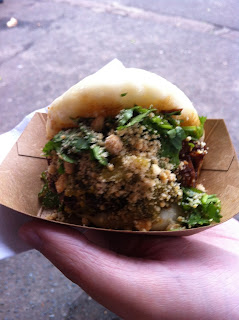 We couldn’t look past the lobster mac n cheese from Bob’s again to fulfil our lobster cravings which are hard to satisfy in the North West.  The mac n cheese was filled with large chunks of lobster meat and swimming in a glorious lobster bisque, if only Bob’s was based in the North West we’d be there every week.  We had a nice chat to Rob, the owner who we had previously met at Borough Market, and it was staggering to find out that they were getting through a couple of hundred kilograms of lobster a day which meant some serious prep work. 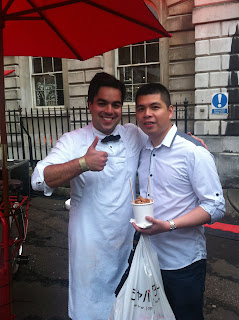 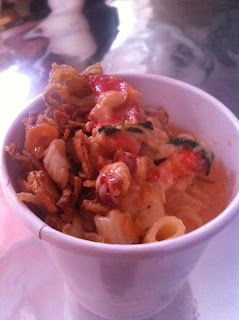 Feeling quite full after the mammoth lobster mac n cheese we were swayed by a sample of chicken from Clockjack Oven and decided to buy a portion for the train.  This was after a day full of eating so we didn’t manage to get through much in this brief visit.  We chose two roasted thighs which came with a ranch sauce and homemade slaw.  With our rotisserie chicken all bagged up (it turned into a tasty supper at home instead) we made our way to Euston to return home and plotted our trip to the next Feast. 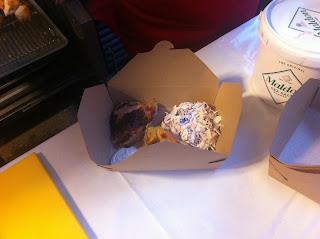 Check out the Feast website for details of future events
Posted by Nomface at 13:41