Free State Kitchen is the newcomer of the year to the Liverpool dining scene according to Liverpool Food & Drink awards.  Serving American classics it has gone down a treat in the city with many rave reviews.

Our first visit however was a little disappointing, on arrival we were told that they had sold out of burgers which was my first choice so we settled on The Clam Sam and The Scooch.  The Clam Sam is billed as seasoned fried clams and seafood in a soft white roll with a kicking Tiger Sauce, crisp lettuce, tomato and fresh onion.  The Scooch featured Italian deli meats, Prima Donna cheese, hot sweet peppers, roasted red pepper, olive oil and balsamic on a griddled ciabbata roll.  However the Clam Sam was lacking clams with very few for the price charged and the Scooch was rather dry and lacking flavour which was surprising given the ingredients. 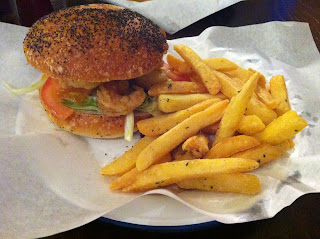 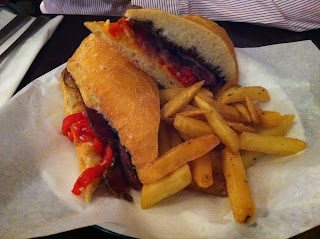 Maybe we had caught them on a bad night after a busy afternoon we thought but first impressions were not good.  Since the first visit we sampled a delicious Boston clam chowder from their stall at the Liverpool Food & Drink Festival last month and this made us want to return for the burgers.

On return last week it was nearly full when we arrived.  I was tempted to order a portion of the clam chowder from the specials board but the Ultimate Double Bacon and Cheese Burger at the top caught my eye and there was no going back.  We also ordered a large portion of Buffalo hot wings.  The kitchen struggled to keep pace with the orders and there quite a lengthy wait for our food.  With us near starving this built up the anticipation further as we watched others being served their food.

The Buffalo hot wings were marinated in buttermilk and served with a blue cheese dip.  The chicken was nice and moist due to the buttermilk but I didn’t find them hot enough.  They were good but need a bigger kick in my opinion.  The burger scared me when it arrived; it was humongous and dripping with coronary failing inducing cheese.  I knew what I signed up for and what was delivered was as described but the sheer volume of cheese was too much.  The two 5oz patties and bacon rashers looked more appealing. 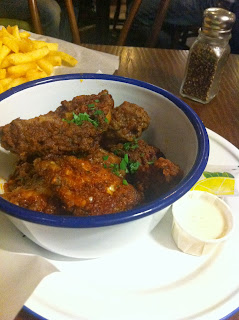 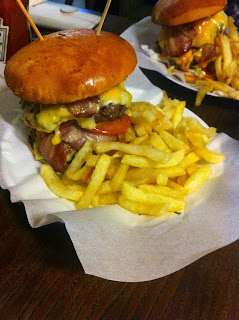 The patties were cooked medium rare but more on the rare side than medium.  So much so that I felt they were lacking a deep beefy flavour generally accompanying top notch burgers.  I’m not sure if the kitchen were pushing orders out so rapidly to keep pace but a tad more grilling would have been perfect.  The same with the bacon, they could have done with being crispier and were only just about cooked.  The fries were dripping oil and lacking seasoning, I suspect they were fried at too low a temperature.

I really wanted to enjoy it but in the end it felt like a chore finishing the meal rather than enjoyment.  The saving grace were the Buffalo wings which I could have a bucket of by myself. The drinks on offer also take me back to childhood favourites such as Vanilla Coke and Coke Floats.  There is much to like but maybe we were unlucky on both visits and not experiencing the same that others have.  The style and presentation of the dishes remind me of Honest burgers in London, of which I enjoyed very much a couple months back, the burger just seemed to pack the right flavours and the rosemary fries were fried and seasoned just right.  Free State Kitchen is not up to them levels yet for me but as a newcomer they can certainly get there with some tweaking and consistency. 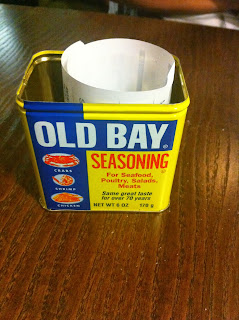