Tartufo is set in the basement of luxury Knightsbridge based hotel, No 11 Cadogan Gardens, a short stroll from Sloane Square tube station.  Originally built as four separate Victorian townhouses, No.11 Cadogan Gardens was built by Lord Chelsea in the late 19th Century.  A portrait of Hans Sloane, the namesake of Sloane Square, is the first to be seen at the foot of the grand staircase.  The building is magnificent with historically grandeur.

Having read various reviews we knew that we were in store for a treat.  The menu choices at lunch included a set lunch menu with wine or a tasting menu.  We wanted to try some dishes from the tasting coupled with some from the set lunch which was no problem at all. As we decided an amuse of goats cheese and tomato tartlets were delivered to the table. The fresh tomato was the star outshining the goats cheese for once. We didn't eat much of the bread as we stupidly had breakfast about an hour before our lunch booking at Tartufo having to make the most of our time in London! 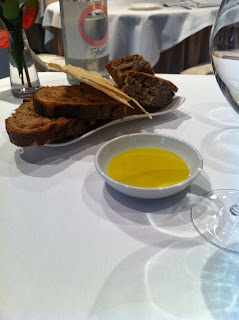 Mrs Nom chose the Autumn truffle tortellini with fresh walnut and mascarpone for starters, the first thing to hit us was the aroma of the truffle filling the room as it was sent from the kitchen. For the first time we did the little sniff the dish thing so often seen on TV shows such as Masterchef, it was warranted given the wonderful aroma of the dish.  The tortellini with mascarpone was rich and satisfying with the truffle elevating it to another level. 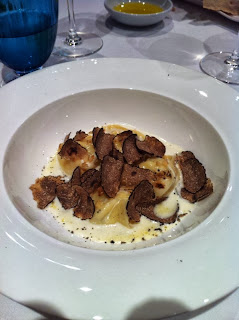 I chose roasted scallops, apple and ginger cream which was beautifully presented.  The scallops were well cooked and complemented the apple, but I was envious of the truffle dish which Mrs Nom only rationed a couple of forkfuls to me! 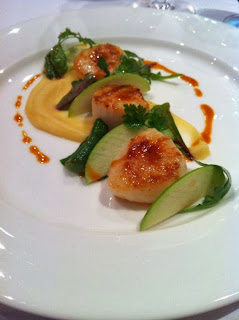 My choice of main was roasted Guinea fowl breast, young carrots, tender peas, truffle shavings and jus de roti.  The chef is certainly not shy with the truffle at Tartufo.  The main was a hearty portion with the Guinea fowl being cooked a bit over pink with a crisp skin.  The carrot and peas were simple but if i had to be critical then it could of done with a bit more jus. 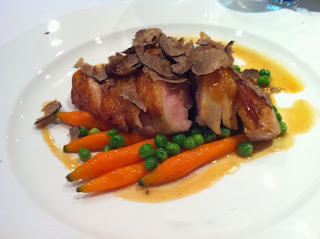 Mrs Nom chose fillet of lemon sole rolled with prawn mousse, turnip cream, swiss chard and fish jus.  This was deceptively rich and coupled with the truffle starter Mrs Nom stuggled to finish this and I gladly helped her out!  The prawn mousse within the sole fillet was a delight. The portions were certainly not on the small side here. 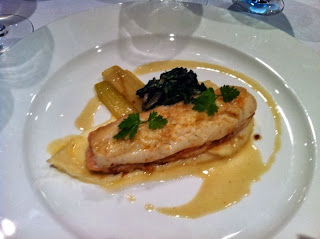 By now even I was struggling so we settled for one dessert, dark chocolate crunch with lemon and cheese sorbet.  I can only describe this as an indulgent cold version of a souped up Snickers (or Marathon depending how old you are!).  It had crunch, sweet chocolate and a great sorbet, we were fighting for the last bites and wished we had ordered one each. 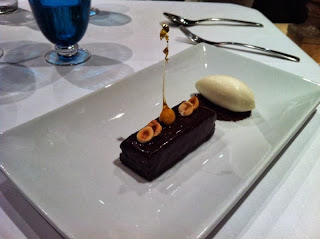 Tartufo is a chilled, relaxed restaurant with a mixed clientele of dressed down couples to highly dolled ladies who lunch from what we could see.  However the atmosphere was friendly and not stuffy at all.  The whole lunch with a bottle of wine set us back just under £80 which for the ingredients and level of cooking was well worth it.