I recently visited Artisan in Spinningfields without Mr Nom to have a catch up with a friend. Arriving all flustered from heavy traffic on Deansgate, we started with cocktails before deciding on doner pizza and a duck and orange pizza. Giving starters a miss to save room for dessert instead, as us girls love our desserts!

The lamb doner pizza didn't have much doner meat on it, but there was a lot of salad on it which I liked and it's what you expect to find on your average doner kebab, alongside the chilli sauce which definitely give it a kick and some mint yoghurt. 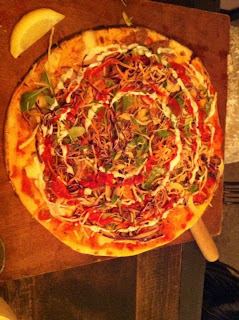 The duck and orange pizza had ribbons of carrot and strips of duck. The segments of orange on the pizza were tangy against the sweet hoisin sauce which was a nice combination. 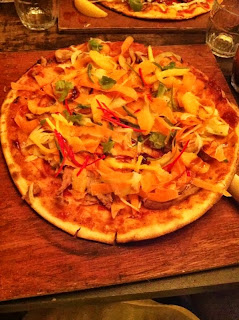 It had been a while since our last catch up, we did more talking than eating and the pizzas were getting cold, we ended up leaving about a quarter of each pizza. We had our eyes on the hot chocolate pudding with coconut ice cream. The ice cream was served in a wafer basket; adding a bit of crunch. The chocolate pudding was soufflé like, I think we both wanted something more chocolately and a little denser but nevertheless the ice cream was a winner! We could have had another scoop each to finish off the evening. 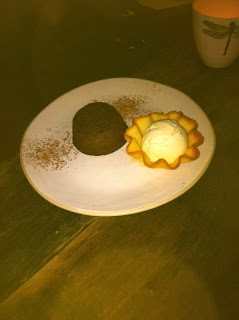 Artisan is a place for cocktails and little nibbles from the Living Ventures Group, at the other end of the spectrum to its flagship Manchester House. It can be rather loud with a speaker above each booth so I did find myself shouting to my friend but I guess its fine after a couple drinks.  Partisan would be a more apt name for the venue. 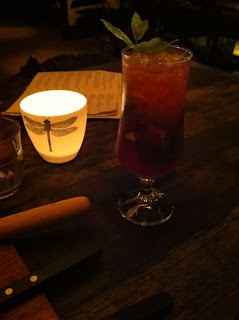