It’s been a good few years since I last ventured into a branch of Wagamama.  That would change following a recent email from their PR handlers inviting us to a tasting of the new Autumn/Winter menu at the Liverpool One branch.  This is the first meal that was fully comped by the restaurant in the short history of this blog, but that won’t influence our opinions.  Feeling slightly awkward with not having to pay at least the choice of what we were served was made for us with predetermined dishes being delivered from the kitchen.

Billed as a bloggers and press event we were all sat together along two of the benches, around 20 in total.  First up was pork gyoza with Chinese BBQ pulled pork, cinnamon, star anise.  The accompanying sauce we felt was too sweet especially against the sweetness of the pork.  Everyone else seemed to love it, but maybe we are used to more savoury gyozas with sharp vinegar dips. 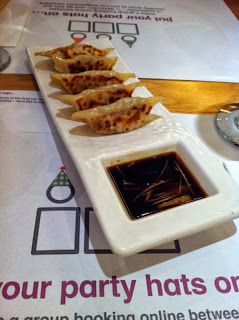 An opinion dividing juice was next of beetroot, carrot and orange.  Although refreshing and different, personally I prefer my juice to have more fruit than vegetables.  One I probably wouldn't order again.  You could tell who enjoyed this on the table by seeing who left the most. 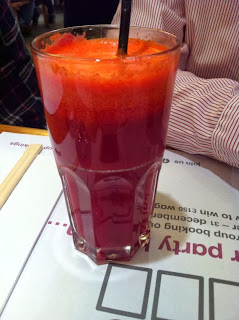 The first of the mains was introduced by the chef next, a Mahi Mahi fish curry.  The white fish had a texture similar to mackerel; the curry was sweet with a little kick.  However I found it a bit boring and just lacked something for a main dish. Next up was vacuum packed duck slow cooked to remove all of the fat in a citrus ponzu broth, chilli, ramen, coriander and spring onion.  The broth was fragrant, spicy and light but the depth was missing.  The duck was tender and shredded like a dream. 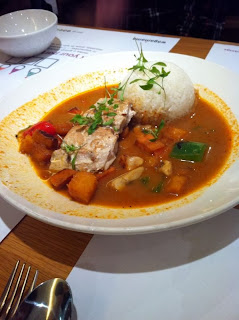 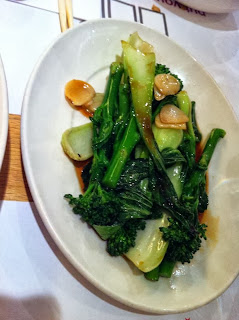 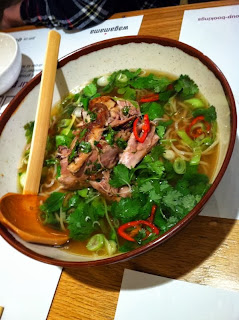 Another ramen dish was next, a vegetarian option with 5 different types of mushroom, king oyster, enoki, close cup, shiitake and chestnut.  The broth was peppery with sesame, garlic, soy and chilli.  The mushrooms were woody and well cooked with some bite.  If the duck from the dish before was served on top of the mushroom ramen then I would be very happy.  The ramen from both dishes was quite soft and I would have liked the option to have them a little firmer. 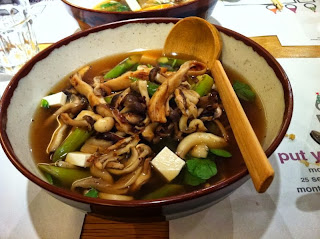 A prawn curry noodle dish was next, apparently a return of an old dish to the menu.  The curry was bright and inviting with lemongrass and coconut adding to the fragrant and beansprouts and cucumber to add some coolness.   Mrs Nom found the dishes too hot so far but I thought the opposite, this one was just right.  I was apprehensive as to the noodle combination and thought maybe rice would be a better accompaniment.  However the noodles soaked up the rich curry with a deep intense prawn flavour throughout.  We heard someone ask if they had just eaten calamari or prawns which we amused by. 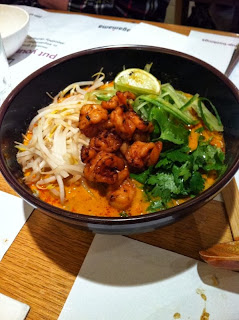 Oddly the next dish was exactly the same as the prawn curry but with chicken instead.  By now we were getting bored of ramen and noodles and the chicken slices were a tad dry and boring.  The dessert for the night was red date and fennel pancakes with star anise and cinnamon ice cream.  This was different and delightful, it went down well with everyone it seemed, although to be hyper critical they were slightly too thick for my liking. 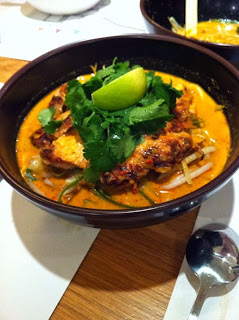 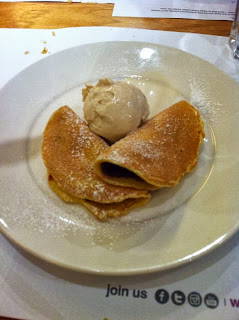 The restaurant was very hospitable laying out wine and also providing a tasting of a green tea and yuzu pale beer.  As far as chains go Wagamama at least try and freshen things up rather than sticking to tried and tested formulas, a mixed bag overall but if presented with a choice of chains for a meal it would certainly be near the top of the mix. 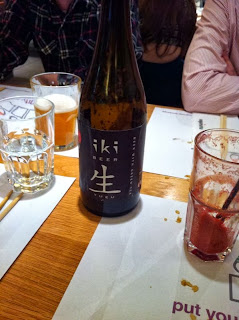