Camp & Furnace are undoubtedly one of the current pioneers of the Liverpool food and drink scene. Making best use of the large warehouse premises they hold numerous events catering for all sorts of diner. We have previously posted about one of its Social nights, where small plates and sharing are the order of the day.  One of the mainstays introduced in the summer was Food Slam Fridays, a chilled out Friday evening event offering casual food and drink coupled with entertainment.  It has proved to be roaring success evidenced by the fact by the crowds it attracts and that it is still going strong now as we head into Winter.

The main attraction to us is the constant change and innovation in the food offerings; no two weeks are the same.  Sometimes dishes for forthcoming Social nights and supper clubs are tested at the Food Slams.  There is a constant stream of guest stalls, most notably Bakchich before they opened up shop in Bold Street. Over the last few months we have been at numerous Food Slam Fridays, below are a sample of some of the dishes.

A no knives and forks stand served suckling pig with buttered pork gravy and chunky apple chutney (£5), the pork was melt in the mouth and as good as it looked. Apparently the whole suckling pig with head and all sparked some controversy but where do these people think meat comes from! We also chomped away on a cheese fondue (£4) with carrot sticks, gherkins and brioche. 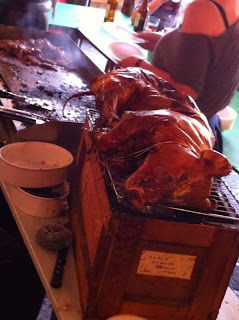 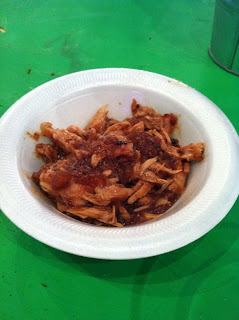 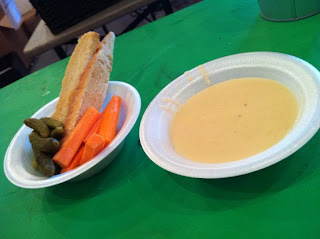 The chippy tea stand served up beer battered sausage hotdogs with chip shop curry sauce (£5). This was rather heavy and salty leaving me feeling uncomfortable and full for hours afterwards! 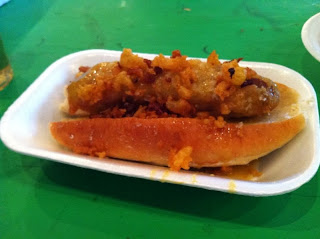 We first sampled Bakchich at a Food Slam event. We ordered the Chicken shawarma and falafel platter (£6). It was a great platter with an explosion of wonderful flavours. 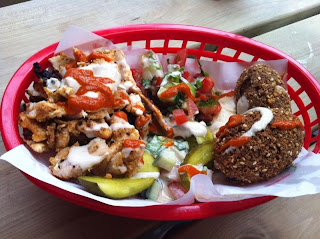 Sticky chicken with thyme potatoes (£4), a great snack with a pint or two! 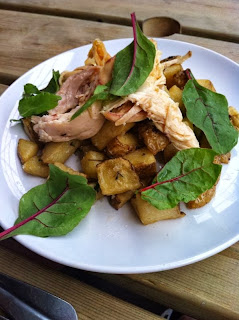 At one of the larger Food Slams, I guess they differ in size due to weather and how close it to payday and other commitments etc, the Grand Garden menu was one of our favourite Food Slams.  Some of the dishes were a test run for one of the Social nights.  The highlight being a Sirloin Wellington with mild mushrooms (£7). Displayed as a gorgeous gigantic slab of sirloin encased a golden pasty we were worried the Wellington would be a little dry; but past the first few slices the meat was wonderfully moist and pink and well matched with the wild mushrooms. 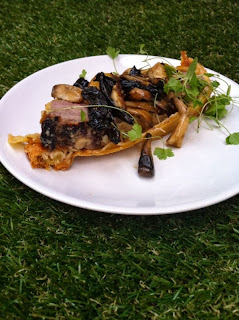 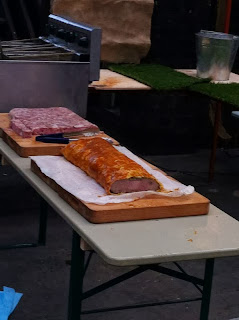 Red Mullet with olives, tomatoes and basil (£6), this was a light summer dish, flaky fish with a range of tomatoes; it was a shame the skin was slightly burnt. Always wanting to try green tomatoes it was a bonus to see them presented with the mullet. 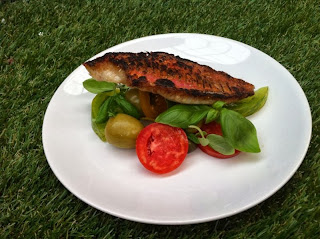 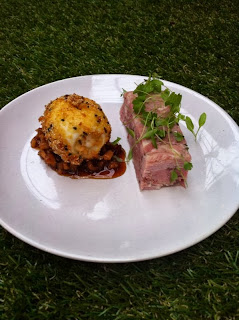 Having a break from the food we went on to sample the cocktails at Slam Wars, a competition between Camp & Furnace and Berry and Rye. Mr Nom picked a Clover Club - Bombay Gin shaken with Noilly Prat, fresh lemon juice and raspberry jam. I chose the Aromatic Cherry Aviation -Tanqueray gin shaken with Maraschino liqueur, lemon juice and spiced black cherry syrup. The cocktails were beautiful and the added extras of the chocolate coffee beans were lovely little nibbles.  I’m sorry but I think Berry and Rye just edged the cocktail wars this time. 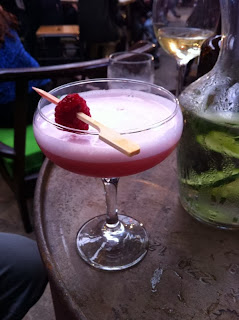 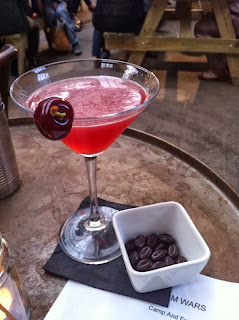 We had been eyeing up the Wood Fire pizzas from Maltidas from the beginning. We settled upon the courgette, spinach and goats cheese pizza (£6), the toppings were different to our usual choices. We added a touch of garlic oil to the pizza which definitely lifted the flavours. The pizza was lovely, not heavy on the stomach with just the right dough depth and the toppings were fresh. Mr Nom loved the goat’s cheese and I guess I rather like it too! Normally I don’t like to eat the crust on pizzas but I had no problem with devouring them. 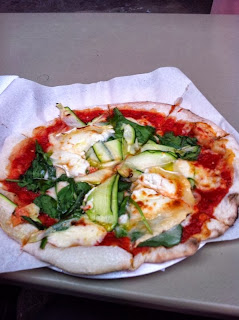 As we still felt peckish, we headed back to Grand Garden for Serano ham, honey and feta (£4) which was a good snack, and the lovely addition of mint leaves adding another flavour to the plate. We ended the evening with a white chocolate and pecan tart (£3). The tart was loaded with pecans, a fabulous dessert and the white chocolate was mellow and not too sweet, perfect! 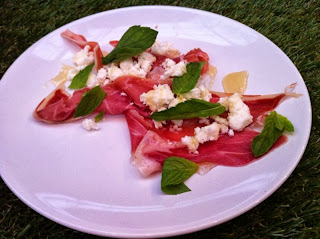 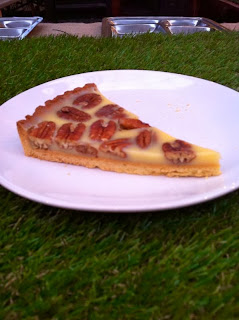 Our favourite Food Slam to date which was epic given the choice and variety on offer.  We also met Steven Burgess, the food director for the first time and watched him in action as he prepared the most of the dishes.

Another Food Slam saw a Peruvian theme with flamed salmon, fresh lime, chopped tomatoes and passion fruit. It was the first time for me pairing fish with passion fruit; I found it created fresh and interesting flavours. The salmon was just cooked ever so slightly using a blow torch and very zesty lime juice was squeezed onto the fish. 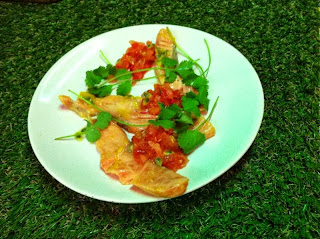 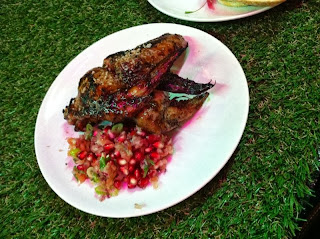 Salt cold, pickled red onions and toast, it was lovely and not too salty. I have had salt cod before but this was balanced perfectly. I like the addition of pickled onions the acidity to cut through the dish. 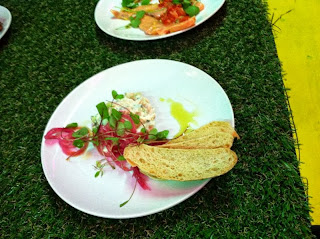 A recent trip to the supermarket was side tracked due to a quick excursion to Food Slam. We stopped at the Chippy Tea stand where they were serving scallop & scallop, accompanied with malt vinegar, pea puree and pea shoots. The dish was even presented in one of the polystyrene plates reminiscent of chip shops. The potato scallop would of been better if it deep fried a little more and the scallop was just about seared on both sides. Mr Nom liked the malt vinegar gel as it was set and didn’t run all over the other parts of the dish. 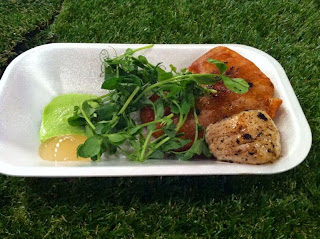 We look forward to seeing what new dishes will be unveiled at future Food Slam Fridays. There is always a good range of dishes which cater for all including vegetarians. So if you’re looking for somewhere to chill after a long week then look no further to Camp & Furnace on a Friday night.