The Rose Garden in Didsbury is somewhere we have planned to visit for a long time; the last time I had it booked for my birthday but felt too rotten after drinking too much the night before!  Some half a year later we finally got a chance to celebrate my Masters graduation.  Parking proved to be quite difficult but we eventually found a space in one of the side streets, the residents must hate people parking in front of their houses.

It was a very hot summer’s night and we spotted a window table by the door as we approached but this was nabbed by the couple just in front of us.  Usually we avoid the tables by the door like the plague.  At first we were seated towards the back end of the thin dining room, the heat was overwhelming and our server noticed this and reseated us immediately to a free table closer to the open door.

Since we had decided to visit the menu has changed a couple of times but as always we pretty much had already decided what we were going to order before we arrived.  For starters I chose the pan-seared cod cheeks with smoked applewood rarebit, pancetta crisp, spiced cauliflower purée and tomato salsa.  It was seasoned a little heavy with the pepper as it kept hitting the back of my throat. Otherwise it was a great dish as I loved the pancetta crisp and the spiced cauliflower puree combination. 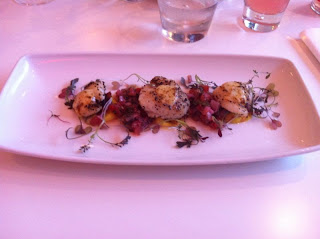 Mr Nom chose the spring lamb carpaccio, slivers of mint crusted loin of Cheshire lamb with sweetbreads, broad beans, peas, pea shoots and minty vinaigrette.  I tried some of this and it was a cool summer dish and the popcorn chicken like sweetbreads went well with the cold lamb and mint dressing. 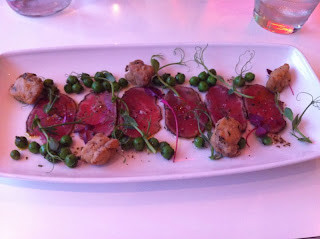 The heat in the restaurant was overwhelming since we arrived and I’ve never experienced heat like this whilst eating before.  It was so hot the ice in the drinks melted within a few minutes!  A few fans maybe needed during these few weeks of sweltering heat whilst it lasts.

For mains I chose the lavender duck, roast goosnargh duck breast with blackberry & lavender glaze, sweet potato mash, roast beetroot, sweet potato crisp and a blackberry sauce.  I was instantly drawn to this when I first saw the menu; the description seemed really interesting with the combination of ingredients and flavours.  Mr Nom said I liked all things with lavender, even suggesting for him to use lavender detergent!  The dish was a triumph, the lavender worked extremely well with the duck, the flavours were well balanced. Nearly all elements blended together perfectly, the only slight negative being I could taste orange in the sweet potato mash which left a slight aftertaste in my mouth. Nevertheless, the blackberry and lavender glaze was tasty as I kept mopping up the duck with it! 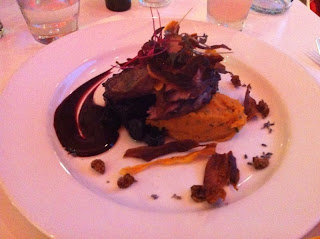 Mr Nom selected the seaside special, fillet of irish turbot with scallop & herb mousse, English samphire, shrimp croquette and tarragon velouté.  I had a bit of food envy when I saw the meaty fillets of turbot.  The scallop mousse was divine and the fish with the tarragon velouté was heavenly.  A great fish dish, I like that there were two generous pieces of fillet whereas I’ve seen meagre portions elsewhere. 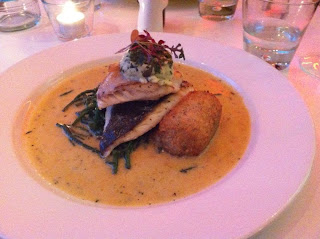 By now the restaurant was cooling down with less people and as the skies were darkening which was a relief.  As always I found space for dessert and we decided to share a raspberry & dark chocolate mille-feuille puff pastry with strawberry coulis, fresh raspberries, raspberry jelly, dark chocolate mousse and chantilly cream.  The dessert was what I expected with the sharp raspberries cutting through the rich dark chocolate. I suppose it was not too heavy of a dessert to end the meal. 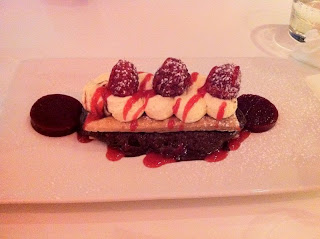 The highlight of the meal for me was my lavender duck dish.  I wish we hadn’t waited so long to visit as we were impressed with the combinations and flavours of everything that we ordered.  Most of the dishes on the menu are also available as part of the set menu which seems great value and something we will definitely return for, although probably on a cooler night.

Email ThisBlogThis!Share to TwitterShare to FacebookShare to Pinterest
Labels: Didsbury