It has been a while since my last visit the Grill on New York Street.  One day my huge craving for oysters surfaced and it was approaching lunchtime so I decided to go with a friend as Mr Nom was in work. Unfortunately oysters were off the menu throughout all of the Grill branches as they were sourcing a new supplier. Feeling disappointed I noticed the menu has changed since my last visit in January.  For starters we both selected the foie gras dish which came with spiced pineapple chutney. The melt in the mouth foie gras was delicious although the spiced pineapple chutney was slightly too tangy for my liking. 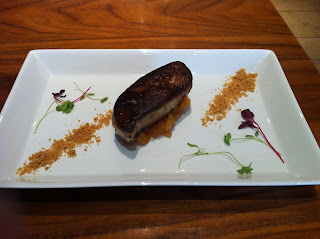 For my main I ordered sesame crusted tuna with sweet picked vegetables and side portions of asparagus with béarnaise sauce and champ potatoes as the side carbs option. The tuna was just seared which is how I like my tuna cooked however I’m not a fan of the sesame, I don’t mind a little but it was sesame overload for my liking. I prefer the old tuna dish on the previous menu, just simple and plain old seared tuna on a bed of pickled vegetables. It was interesting as the pickled vegetables all had different textures, providing some crunch in contract to the soft tuna. The champ potatoes were just lovely and buttery.  My friend ordered the 12oz rib eye steak served with a baked potato and peppercorn sauce.  It was a shame the steak tasted rather charred; otherwise it looked like a fine steak. 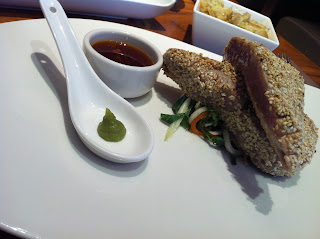 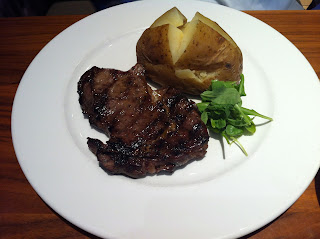 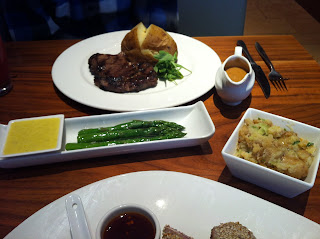 We decided against desserts as I was rather heartbroken the red velvet cake was off the new menu. The Grill had one of the best red velvet cakes I have ever tried. Back in January I ordered it on each of my three visits at the Grill branches because it was that delicious! Instead we had cocktails, pear and apple martini and a banoffee martini to end the meal. 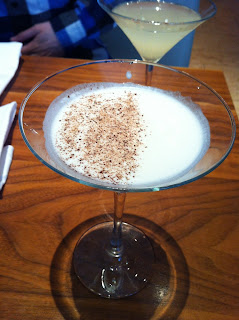