Having walked past many times we decided to finally try Nolita Cantina on Bold Street one Friday. The restaurant is long and narrow with an open kitchen at the end of the room.  Feeling rather hungry we ordered frickles which are battered deep fried dill pickles and nachos with beef brisket. There was a wait of about 20 minutes for the starters, probably due to us arriving after a few tables had just placed their orders.

The portion of frickles was generous with about 8 pieces of large fried pickles.  However this was topped by the arrival of the nachos.  Served in a rectangular tin, my first thoughts were surely that’s got to be a main size.  We noted that one of the party on the next table had nachos as a main meal.   However it was indeed one and the same.  To top it off we added beef brisket for £1.55 and the portion was extremely generous adding another couple of inches to the height of the nachos.  Topped with mounds of cheese and sour cream the nachos with the brisket were a delight.  After tackling it for ten minutes it was not even half finished and we found plenty more melted cheese in the base of the tin, not a dish for the weight watchers crew. 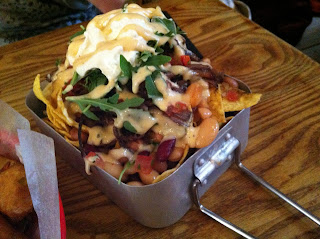 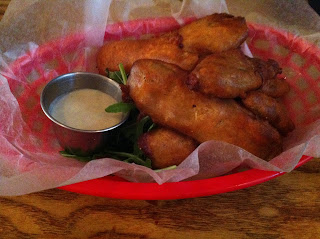 We were fighting a losing battle and asked for the mains with half of the nachos still remaining.  For our mains we ordered glazed pork belly strips and a full rack of BBQ, both accompanied by fries and slaw.  We were horrified when the mains arrived, they were humungous.  Both tables on our left and right had a collective snicker when they saw the plates.  I feel full just writing about this.  Mr Nom didn’t realise that his rack of ribs had been cut into four segments and thought there was only two until I pointed it out that they were hiding underneath.  The meat on both plates were placed on top of what I can only describe as a mountain of fries. 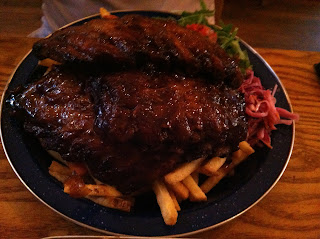 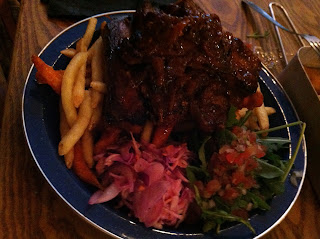 Mr Nom valiantly put away three slabs of ribs before declaring the white flag.  I could only manage a few fries and two pieces of pork belly.  The rub and flavour on the ribs and pork belly were very tasty and without the nachos we would of put them away with ease and them some but the cheese from the nachos had finished us off.  We noticed the table next to us requested a doggy bag earlier and we had the same thoughts.  With more than half of the mains we could not let it go to waste; it also made for a good lunch the next day.  The dessert menu is small compared to the rest of the menu and we now know why.

Nolita offers excellent comfort food for the hungry, a good place to go with friends and chill. Be warned though the portion sizes are enormous! I think the waitresses need to warn you that the nachos are a meal in itself! The pulled pork main and burgers are on our hitlist when we return.  With most meals and burgers coming in at under a tenner it is great value for the sheer quantity of food delivered.

The Bold Street area is an embarrassment of riches with its variety of cuisine.  Just off the top of my head I can think of Italian, Chinese, Indian, Korean, Moroccan, Mexican and Lebanese soon amongst others.  Something for everyone, get yourself there and support the independents if you want to avoid the chains in Liverpool One.

Email ThisBlogThis!Share to TwitterShare to FacebookShare to Pinterest
Labels: Liverpool