It amazed me when I tried to recall my last visit to Etsu, a previous favourite of mine.  It amazed me even more when I pinpointed it to May 2008 as I remember it being a birthday treat from a cousin.  Fast forward five years and the restaurant seems to be unchanged from my last memory of the place.  With the only other sources to fulfil our sushi fix being Yo and Sapparo in Liveprool, Etsu was the obvious choice for our dose of Japanese.
The temperature inside the restaurant was rather warm and I decided on a large Asahi to combat the heat and quench my thirst, Mrs Nom settled on a Calpis (not to be mistaken for cow piss).  We were indecisive in what we wanted to order and spent an age much to the efforts of our waiter who we had to request to give us longer, twice.  He probably thought get on with it already.
We eventually settled on the chicken yaki tori with teriyaki sauce, seared sea bass nigiri, a mixed sushi & sashimi set and the special fish of the day which was sword fish.  The yakitori came first and we were pleased to see that it had not been over grilled and was just right with a bit of colour.  We asked for the dishes as and when they were ready and the swordfish came next which surprised us as we thought the sushi would be first.  The swordfish was served with a salad, ponzu sauce and a bowl of white rice. 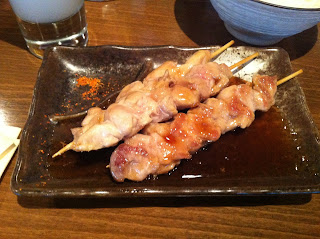 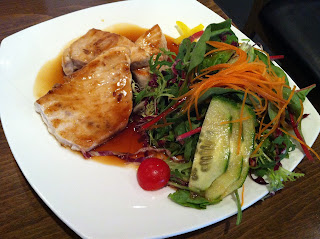 The sushi and sashimi set arrived soon after and our plate selected by the sushi chef included ebi, tuna and sweet omelette nigiri, tuna maki, mackerel and tuna sashimi. We supplemented this with seared sea bass nigiri.  We finished with  matcha cake with black sesame ice cream, only negative being the cake was a bit grainy.  Etsu remains the top Japanese restaurant in the city but with not a lot of competition. 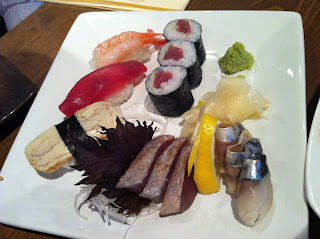 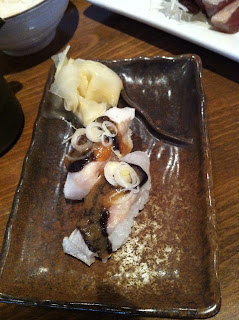 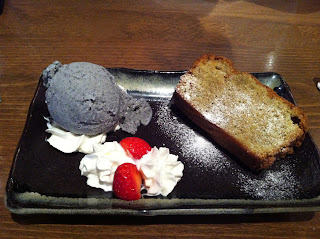 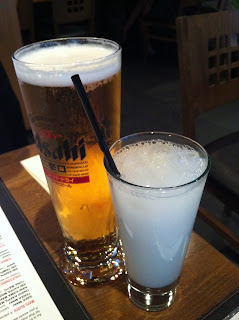