We were famished after an evening’s shopping at Cheshire Oaks and Mr Nom suggested that we try the newly opened Byron in Liverpool One.  Having been before to a branch in London Mr Nom was craving the Oreo milkshake which he assured me was worth the drive back to Liverpool.  The burger joint was packed on a Friday night but we didn’t have to wait too long to be seated and table turnover seemed quite fast with the type of food.
Browsing through the menu, I contemplated the chicken burger but was scolded by Mr Nom who said we should have the beef burgers since we were at Byron. I’m easily influenced and soon gave in and ordered the classic burger which consisted of a 6oz hamburger, lettuce, tomato, red onion and mayonnaise. Mr Nom was torn between the cheese burger and the Byron burger but he decided on the Byron, which came with dry cure bacon, mature Cheddar, lettuce, tomato, red onion and Byron sauce. As for the sides, we opted for skin on chips and coleslaw. 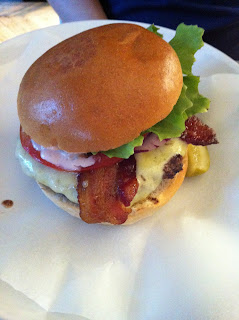 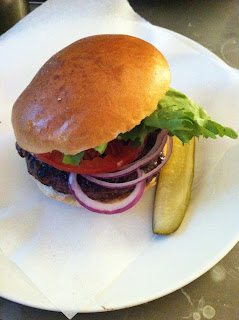 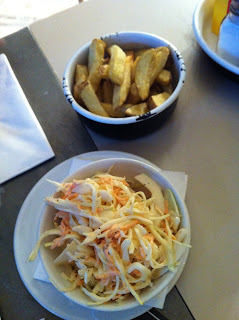 The Oreo milkshake was indulgently thick and creamy but it was so good! I did not want my fresh lemonade afterwards and was half sharing the milkshake to evil glares from Mr Nom. 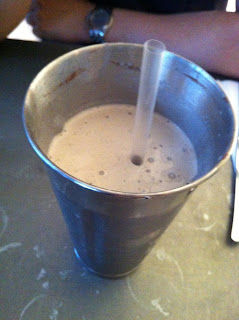 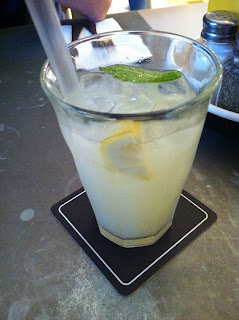 My classic burger was cooked perfectly for my liking with the centre being pink; it was a shame there was not a lot of sauce which made meant it was quite dry proved a bit of a struggle to finish.  Mr Nom commented that whilst his Byron burger came with sauce it was nowhere near enough.  The burgers were served with a large gherkin which was a nice touch and a throwback to the days when I would get excited by a hamburger from the Golden Arches as a kid.  We understand that whilst not being in the style of Solita and Almost Famous with mounds of toppings and sauce which retain interest til the very last bite, the burgers at Byron were good but could be elevated further.  The skin on chips reminded us of chippy chips in a pleasant way and was a nice change to the usual fries.
After wolfing down the burger with the rest of the shake I felt incredibly full! Our waitress tried to tempt us with desserts, but there was no way we could fit it in this this time, this was enough to satisfy my burger fix for the whole week! We left Byron feeling content, we will return just for the shakes alone but would welcome more sauce on the burgers next time round.
With the burger war heating up in Liverpool with Free State Kitchen, Nolita Cantina and soon to be revealed Almost Famous it is exciting times for the Liverpool food scene but there surely will come a point of saturation.  Although Mr Nom wouldn’t mind if Solita joined the party to save the trip to Manchester.