We recently found ourselves wanting a light dinner following an epic lunch at Gymkhana earlier on in the day. Trying to think of a few seafood places we were wondering around Covent Garden and popped across Lima Floral on Floral Street which opened last month and is the younger sibling of the Michelin starred Lima in Fitzrovia on Rathbone Place. The cuisine is Peruvian and not having tried ceviche before it seemed the perfect candidate for a light meal.

We chanced our luck at a table in the main dining area but as expected at 8pm on a Friday night it was fully booked and heaving. Although luck would have it that they had a downstairs bar area serving piqueos, tapas sized dishes which were even better for our appetite as well as scoring a comfy booth.

The menu is split between five sections, we ordered a selection from each of them to try a variety of different dishes. From the tiraditos part we tried salmon with yellow chilli pepper and camote chips. 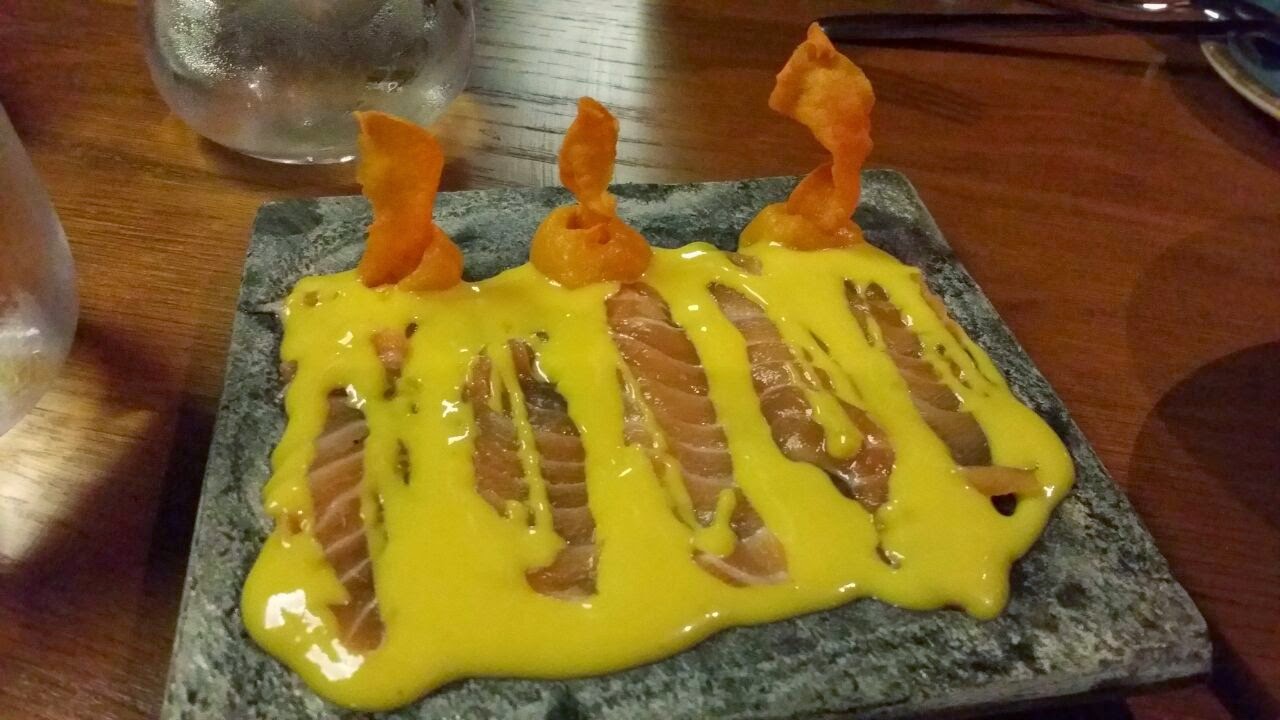 From the causas section we chose tuna with Amazonian cashew, blue potato, and uchucuta. A very pretty dish with striking colours, matched with delicate flavours. 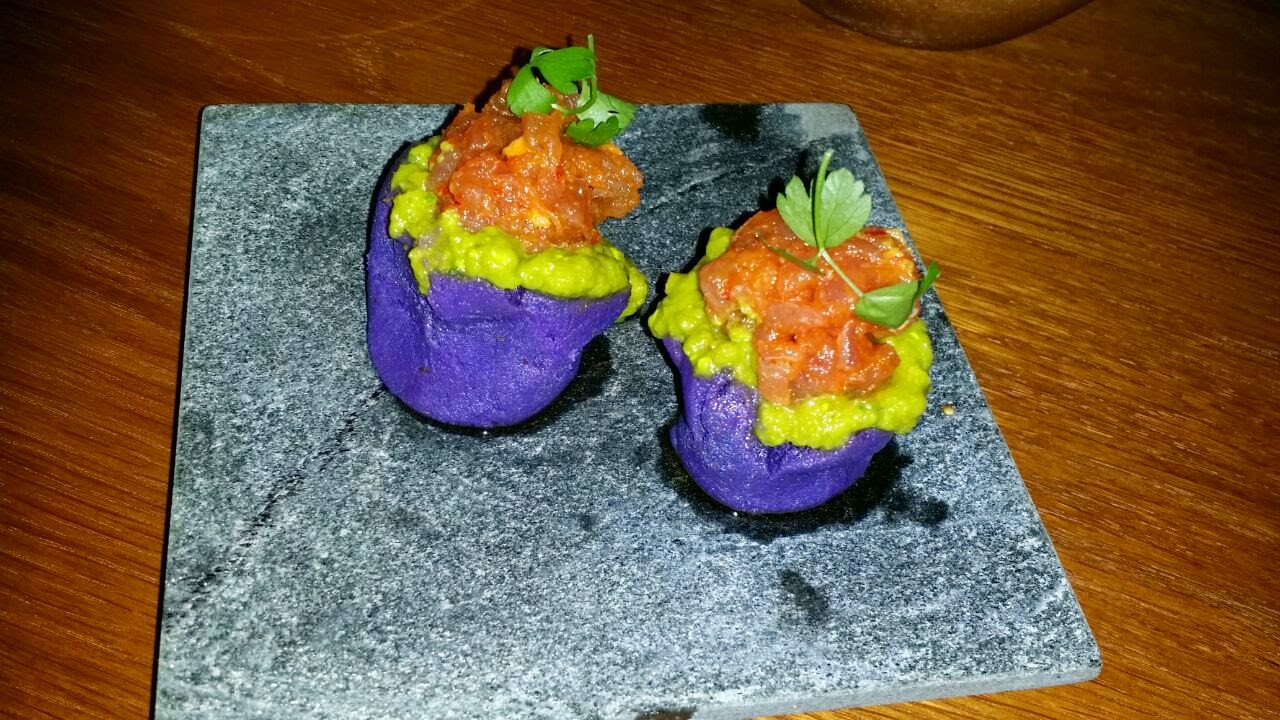 We started with sea bream ceviche with yellow tiger’s milk from the ceviches section and this quickly became our favourite. The tiger’s milk and dash of lime lifted chunks of sea bream, a very refreshing dish. We enjoyed it so much that we ordered another ceviche dish of scallops, heirloom and tree tomatoes. Whilst not hitting the heights of the sea bream ceviche flavour combinations it was still good, although a little small even for tapas sizes. 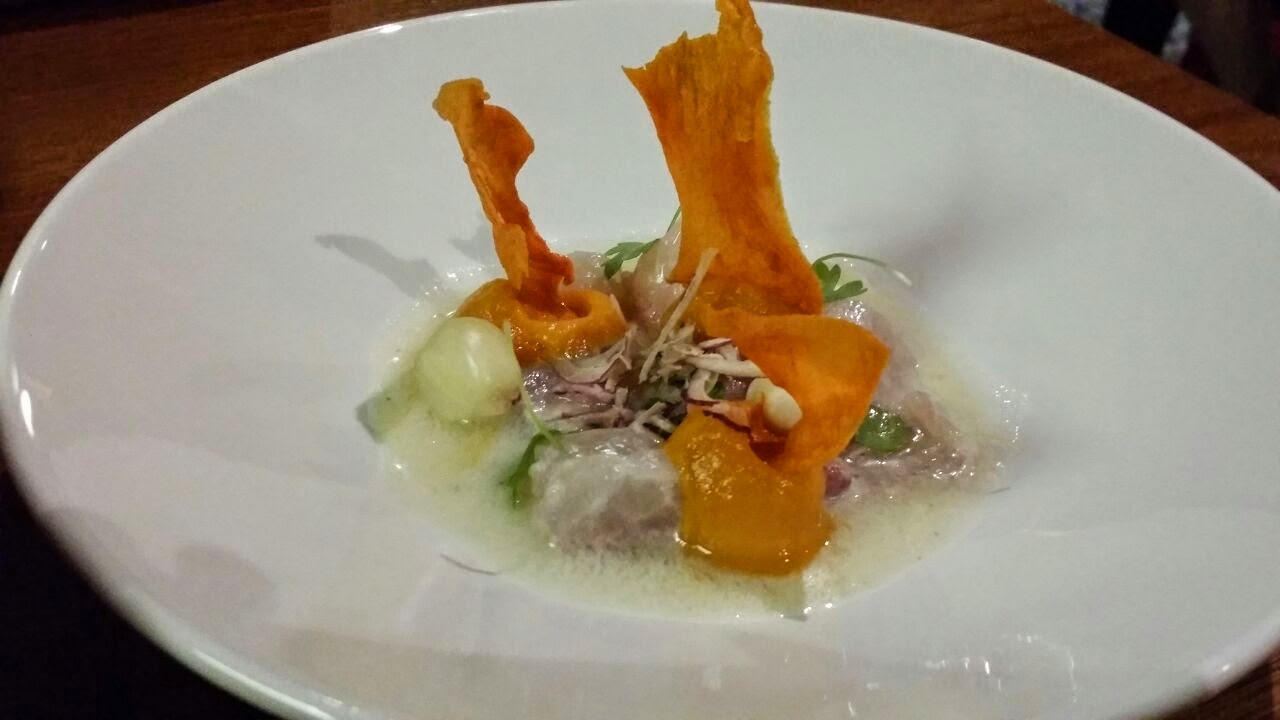 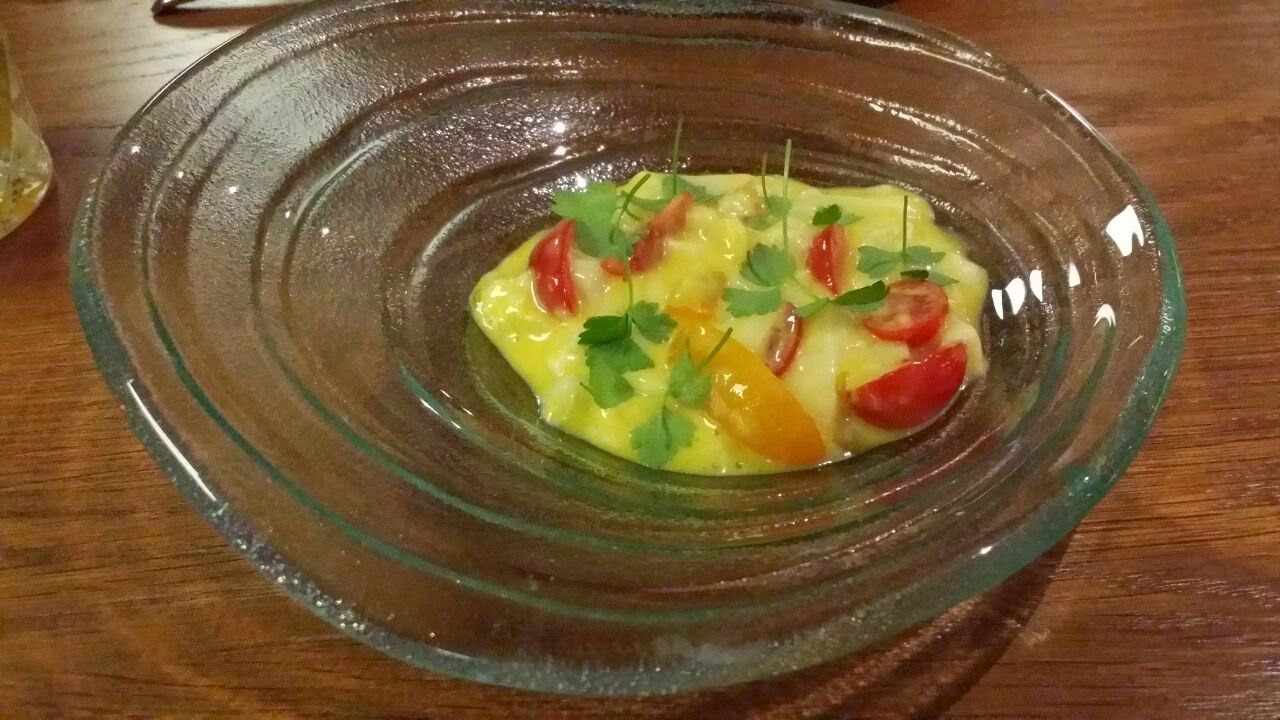 From the antichuchos skewers part we had veal heart with anticucho marinade. The veal hearts were grilled very well and not over done which could make them too tough to eat. 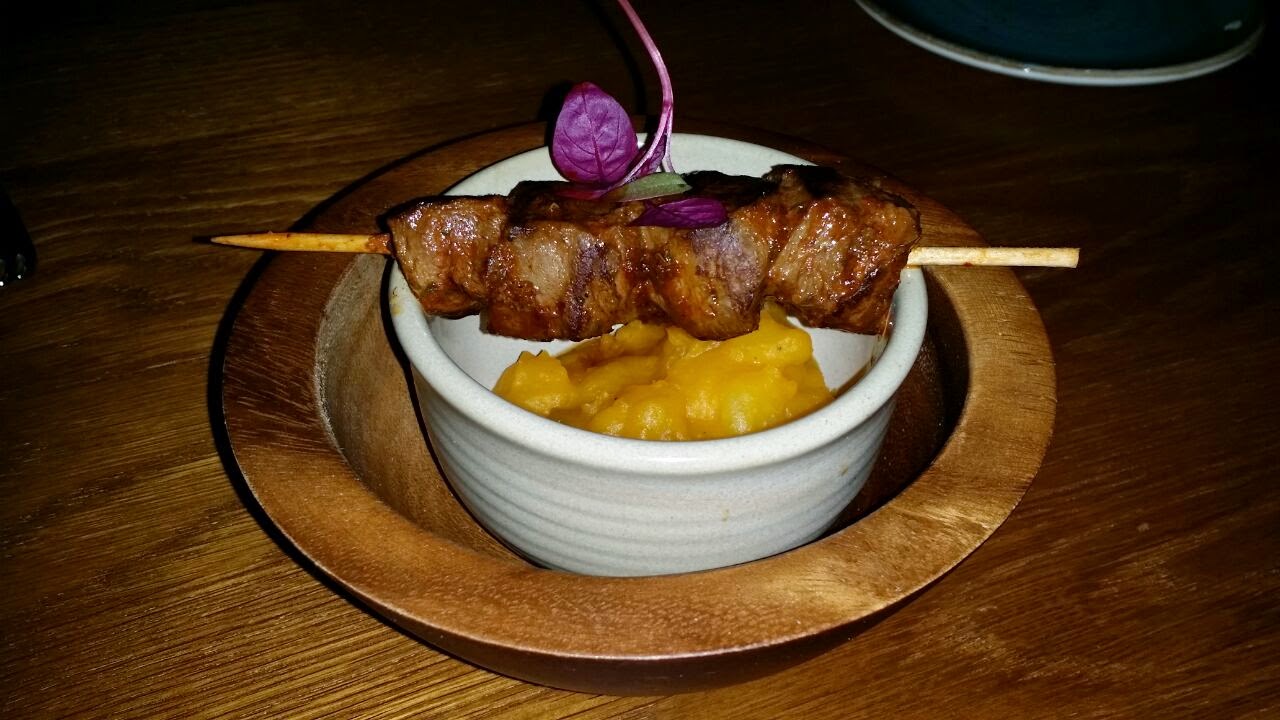 Finally from the tostadas section we chose octopus with botija olives, annatto cream and red shiso. My one gripe with tostadas is that they are fiddly to eat and I usually end up picking at the topping and then eating the crispy tortilla separately. The flavours were once again on point and complimented each other, the flavour combinations from nearly all of the dishes were new to me but I am now definitely a fan of Peruvian cuisine. 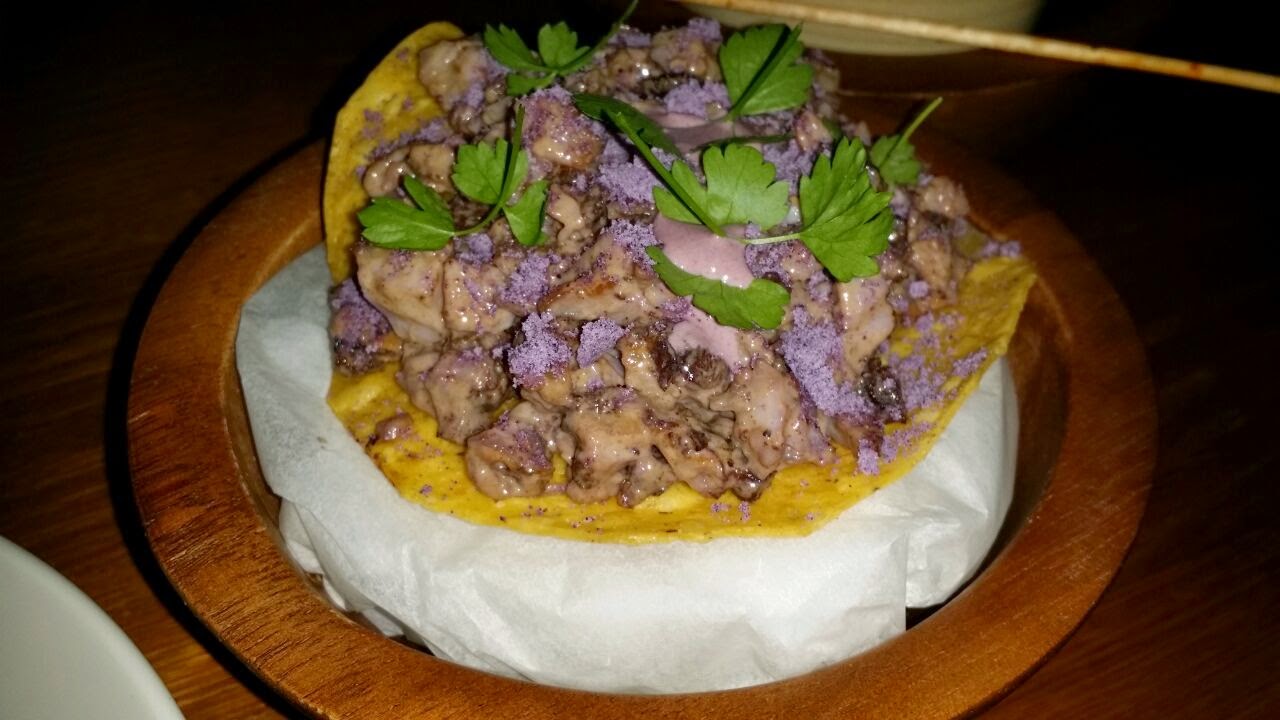 To wash down the exquisite food we had to have a classic pisco with lime, sugar, egg white and angostura bitter. These go down quick! Overall, despite it being early days it is a great place for a quick pre-theatre nibble or light meal and drinks with dishes ranging from £5.50 - £8. Next on our list is to try the full a la carte. 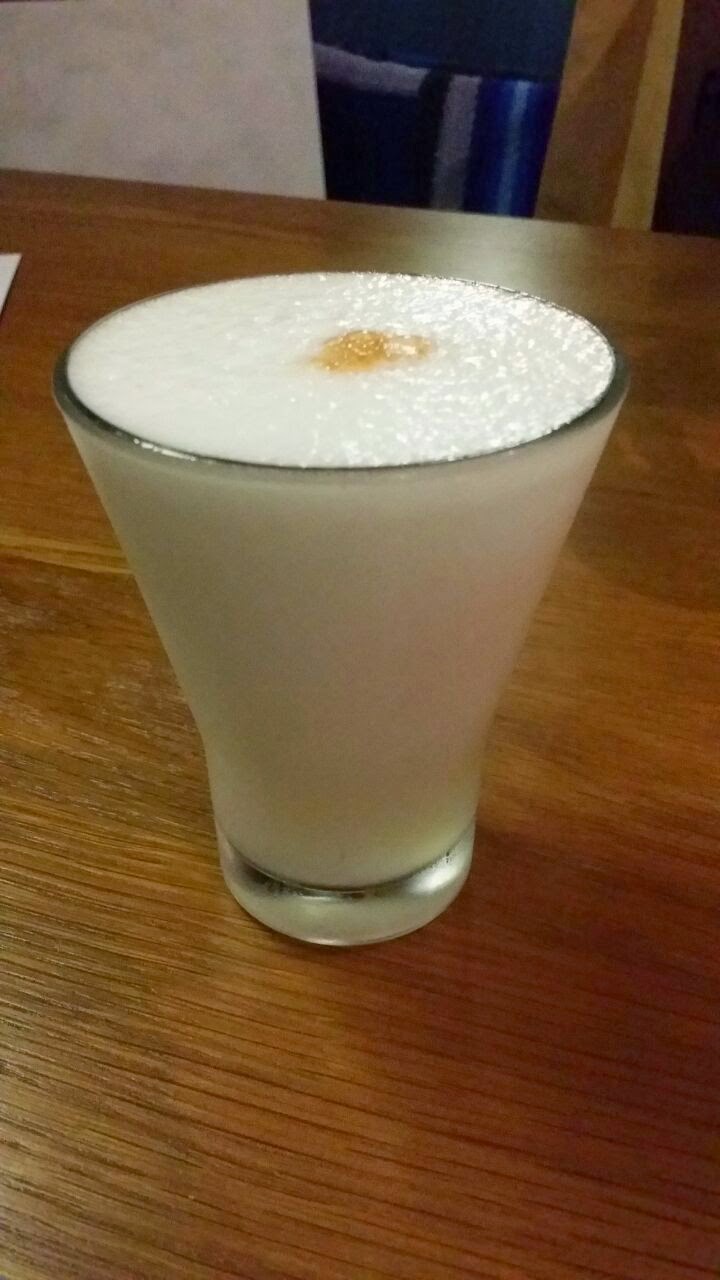