A Wong is a Chinese restaurant which is based in Victoria, London.  Open for just under a year it has already found its way into the Michelin guide.  The restaurant is small and cosy with an open view kitchen.  Chef patron Andrew Wong can always be seen leading his team and this was no exception during our visit.  Offering a wide range of dim sum dishes during the lunch service and larger dishes for dinner where the emphasis is on ordering a selection for sharing across the table accompanied by rice.

We were attracted by the Peking duck feast menu of 8 duck courses featured on the website. Quality Peking duck is quite rare in the UK, well we’ve not come across a good one yet.  The taster style of this particular Peking duck menu caught our attention as it provided variety.

The first course was smoked duck with pomegranate, chilli, pickled and raw onions.   This was a well thought out balanced dish, perfect for an appetiser. 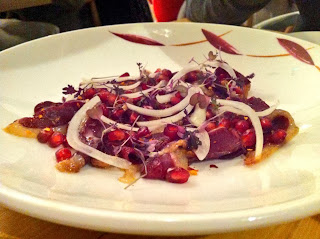 Next up was a Shanghai soup dumpling with crispy duck skin, or siu lung bao.  The crispy duck skin was superb and free from any fat. The soup broth burst through the pastry and instantly I wanted another one! The soup broth was deep with the freshness coming through from the chives. We even saw Chef Wong preparing the dumplings a few minutes before we were served them so we know they were freshly made! 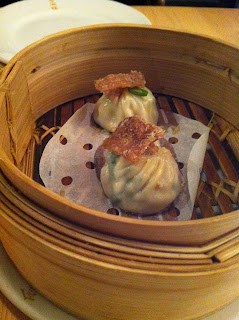 Chef Wong then presented us with a whole freshly roasted Peking duck and explained the feast to us describing which parts were used for each of the dishes.  Interestingly it takes over two days of preparation work for the feast therefore at least 48 hours notice is required for the feast. The dishes are created using two ducks and by now we were gagging for the main event. 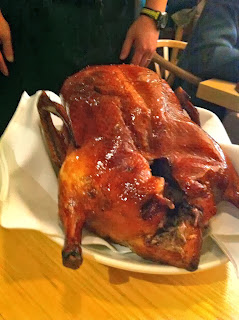 As Chef was carving the duck we were presented with spiced duck necks with nectarine which packed a kick.  We ditched the chopsticks at this point to get all of the meat out of the nook and crannies. This was followed by an intense duck consommé with red dates and shitake mushroom. We were told that since opening the carcasses of all the ducks have been added to the pot creating a deep earthy broth. 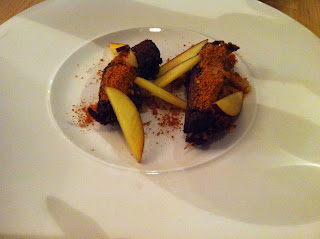 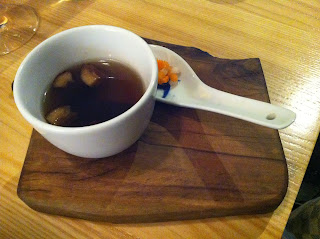 The key to the next dish is carving and serving it hot.  As soon as Chef Wong has presented us with the duck he took it back to the kitchen to carve it.  Served as roasted duck skin with cinnamon sugar.   This was worth the journey for the meal alone, crispy and fresh with the sweetness from the cinnamon sugar was just incredible.  I could eat the skin from the whole duck if served like this! 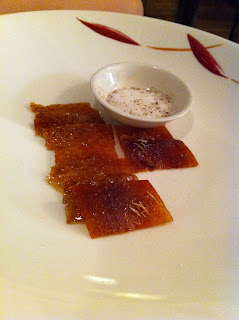 The breast of the roast duck was served with pancakes, ginger oil and plum sauce, a change from the usual hoi sin.  It was a little sharp at first but with the addition of the other condiments of Sichuan pepper and garlic oil it bizarrely complimented the plum sauce and took away the sharpness.  The meat of the duck was moist and succulent, every bit as good as the skin.  Mrs Nom was so immersed in the duck that she twice attempted to pour water with the top still on the bottle to my amusement. 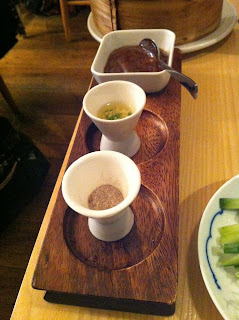 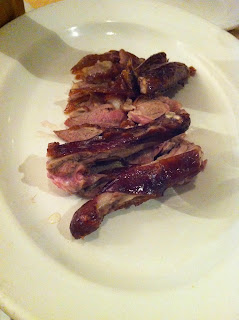 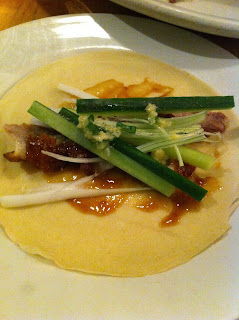 The last savoury courses were served together with rice. Caramelised duck with pickled carrots was the star of the dishes, the sweet strips of duck were very additive.  Duck breast, oyster sauce and salsify was slightly tangy.  We'd thought that we may get tired of duck by the last few courses but such was the variety that we couldn't get enough.  Spicy minced duck with green beans and market vegetables completed the dishes and added some greenery.  The medley of dishes reminded us of family meals at home being Chinese. 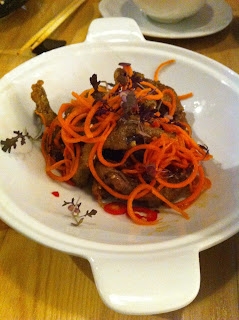 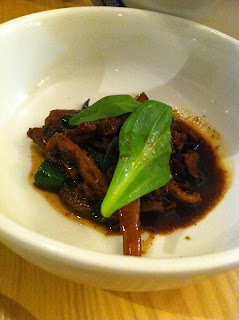 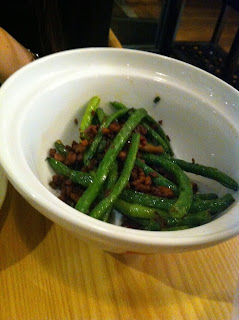 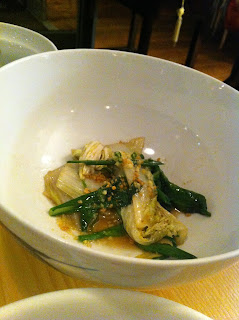 Next came the dessert dish of meringue, lychee granite, mango purée and lime sorbet. A very refreshing and light dessert. The meringue was crispy outside with a very gooey centre. Mrs Nom loved the different layers of flavours. 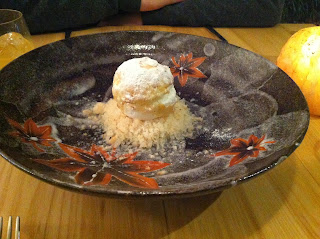 Chef Wong then presented us with a cocktail of whisky infused with duck fat, citrus and ginger ale. Previously a straight duck fat whisky was served but Chef said this was not to everyones taste so changed it to a cocktail.  Mrs Nom still found it too strong so I had two to myself, not that I was complaining. 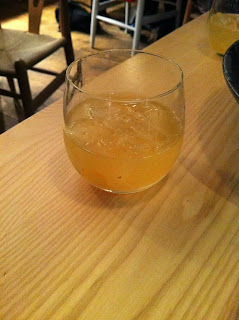 Mrs Nom got hold of a menu and wanted another dessert so we ordered the coconut ice cream, glutinous dumpling, apple, pandan jelly and peanut cream. The dish was presented with candy floss on top and looked pretty with the green pandan being visible.  The salted peanuts and coconut ice cream worked well but the apple and pandan jelly was quite sharp and fought against the rest of the flavours. Quite an unusual combination of flavours which sounded brilliant on the menu but didn't come together too well in our opinion.  The Peking duck feast before it had been faultless however and Chef Wong should be commended for his efforts in raising the stakes of Chinese cuisine. 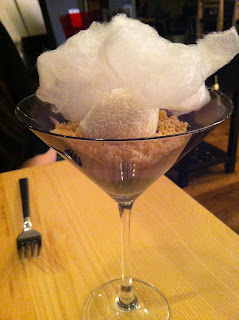 The service was just right without being intrusive and the atmosphere was loud and lively like most busy Chinese restaurants. We will no doubt be back to try the dim sum and the rest of the menu based on this one meal alone.  At £38.88 per head for the feast it is also very good value. Simply put, the Peking duck feast is a must try for all duck fans.