Ember Yard is a new restaurant from the Salt Yard Group who also run popular small plate inspired eateries Salt Yard, Dehesa and Opera Tavern in London.  The latest venture is just off Oxford Street on Berwick Street and occupies a large space with a downstairs bar. The inspiration for Ember Yard is taken from Spanish and Italian methods of cooking over charcoal. This is reflected by the majority of the dishes on the menu which are cooked on a custom built charcoal fired grill.

I visited alone during the first week of its soft launch and was seated at the chefs counter which provided me first hand insight into the busy workings of the kitchen.  The kitchen was very busy serving up plate after plate of fine looking dishes, this aided me in my selection as I could see the dishes as they left the pass before ordering!  The service was smoothly overseen and controlled by Ben Tish, Chef director of the Salt Yard Group, impressive given that it was only the third night since opening.  We first come across Ben during Taste of Xmas where he was demonstrating on the barbecue.

My first dish was octopus with pepperonata and mojo verde alioli.  The octopus was very tender and meaty, helped by the fact it was extremely well cooked on the grill for just the right length of time before it became tough. The flavour combinations went well together and enhanced the meaty octopus. 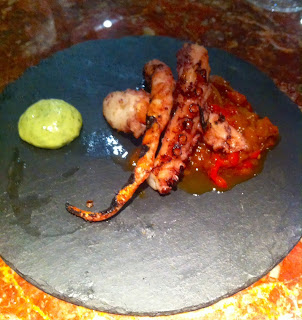 I was intrigued by some pictures of the grilled Iberico presa on Twitter and knew I had to order it, even more so when I saw a few leave the pass.  Served with whipped Jamon butter it was very succulent and just delicious. Next up was grilled cornish mackerel with samphire, calms and amalfi lemon.  I also ordered buttermilk parsnip chips but they were served in very generous portions so I cancelled them so that I could order more seafood and meat dishes.  The team and kitchen handled this request without any fuss, I didn't feel too bad when I overheard Chef letting the team know that parsnip chips were sold out some twenty minutes later.  The mackerel was enjoyable but needed more of the almalfi lemon as the fish was a bit boring without it during the last few pieces. 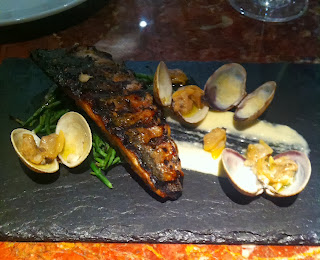 Cuttlefish with roast pumpkin, n'duja and wild oregano.  I chose this as I'm a big cuttlefish fan and it also provided me with pumpkin which would be my veg intake for the meal!  The spicy n'duja gave the dish a kick and again the cuttlefish was well cooked on the grill. 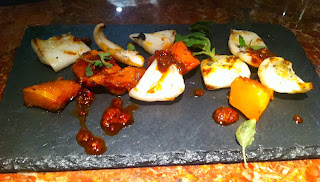 I was contemplating ordering a veg dish to finish off but could not resist the grilled salt marsh lamb, roasted aubergine and salsa verde. Served the right grade of pink for my tastes it was well matched with the salsa verde but I didn't think the aubergine added much to the dish. 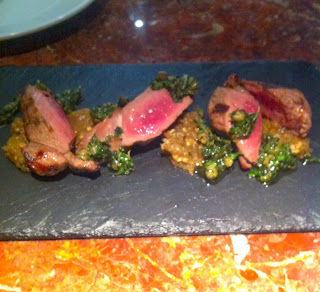 Ember Yard has a cool and lively vibe and has sparked my interest in the other restaurants of the group. There was 50% off food during the opening week but the normal prices are very reasonable for the quality served up and I can see myself working through the rest of the menu. 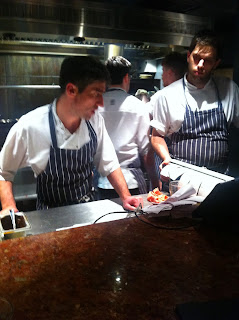