Aumbry in Prestwich is somewhere Mr Nom and I have been waiting to visit for a long time and since recently found the opportunity as Mr Nom was working in Manchester.  The restaurant is run by accomplished Chef Mary-Ellen McTague.  It is listed in the Good Food Guide and was awarded 90th place in the National Restaurants Awards Top UK restaurants of 2013.

The restaurant is set within a residential area in a converted terrace house. After a grueling journey in the rush hour traffic where it took some 30 minutes to travel a few miles we were happy to be led upstairs in the homely setting of the first floor to settle down to drinks and the menu. We were presented with our first nibbles of Gruyere Cheese bites followed by pea and black vinegar, crunchy bites and pea mousse with a hint of mint. It was quite an unusual combination. 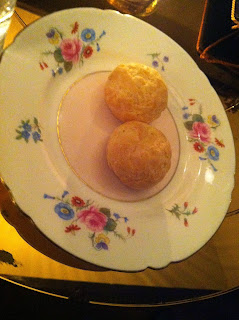 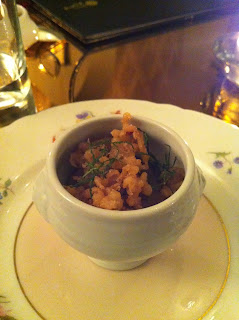 We were then led downstairs to our table where the first course from the 4 course a la carte menu, goats curd with beetroot, chicory leaves and mooli. 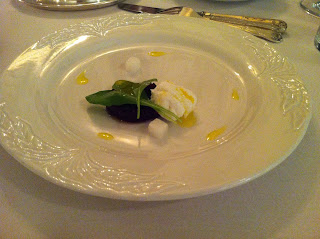 For starters Mr Nom chose the grilled sardine with shaved fennel and walnut vinaigrette.  It went down well he was working his way through extracting all of the fish diligently that he could from the bones. 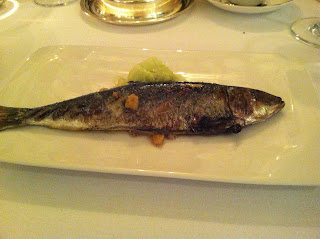 I went for sauteed mushrooms. I enjoyed the textures of the different mushrooms with curd, birch powder, garlic and parsley. 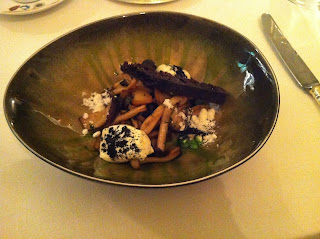 The accompanying bread was served with beef dripping, oh so naughty but nice! 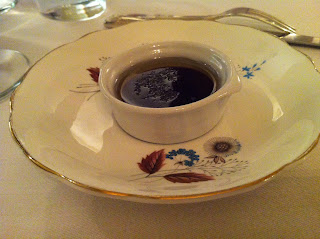 For the main course I had hake with cockles and mussels and radish and red cabbage.  This was a visually pleasing dish with some wonderful colours on the plate. Perfectly cooked fish and the sauce was rich and tasty matching the fish. 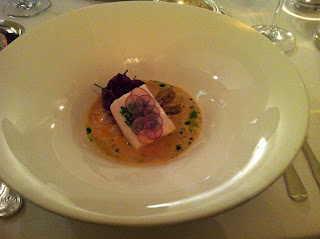 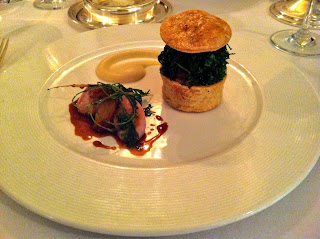 For dessert I had the Ratafia pudding with Cox's Pippin apple, almond and bay with a flaky puff pastry. Mr Nom chose the sherry trifle with a mandarin syllabub which I seemed to eat more of than him as it was so good! It was frothy and lightly fragranced, a light dessert to end the lovely meal. 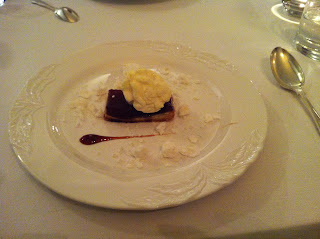 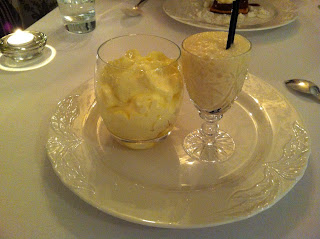 Petit fours were fantastic, olive oil biscuits with orange blossom, they were delicious and fragrant! I could clear a whole batch of them!  Quickly followed by hazelnut and caramel milk ice with popping candy. 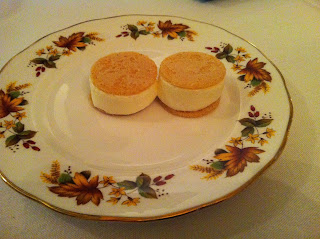 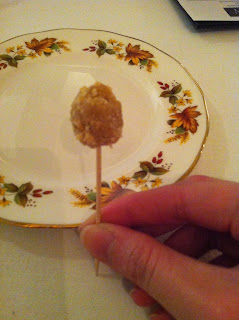