Bob's & Co is a pop up based upstairs the Rising Sun pub on Carter Lane near St Paul's Cathedral. The pub stands at the very site that Guy Fawkes was said to have met his co-conspirators. We first met the owner Bob during his residency at Borough Market with the Bob's Lobster van which has been very well received this year serving up delicious lobster rolls and lobster mac n cheese. Being big fans of the delightful lobster treats we have followed the van in its travels across the London street food scene at Feast and more recently Street Feast at Hawker House. When we found out about the pop up serving up a wider range of seafood and other treats I was eager to visit.

I started with a mix of grilled and fried oysters. The grilled version with Parmesan cheese were the winners here with the shiso wrapped fried oysters losing some of the fresh oyster sea taste. 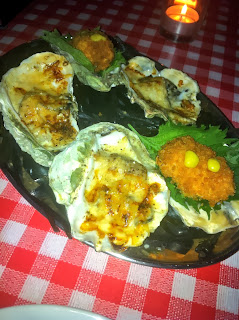 Next up were scallops with caramelised onion, chanterelle mushrooms and lardons. The scallops were beautifully cooked and soft in the middle. The onions added some sweetness which brought the dish together. 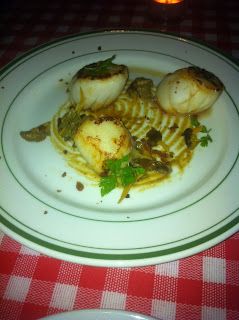 Craving lobster mac n cheese I requested a half portion but Bob insisted that I have a full portion. This was packed full of lobster pieces which was nearly a whole lobsters worth! As good as I remember it being. 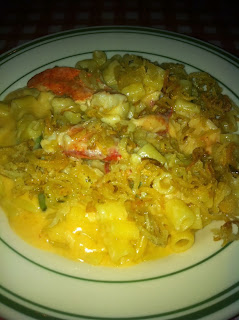 I was dreading the last dish of shrimp and grits after the mac n cheese but I finished it all eventually. Served with pork belly and polenta puree it was my least favourite dish of the night but it may have been due to me nearing bursting already! The shrimps and pork belly were pleasant but the polenta I wasn't too fond of. 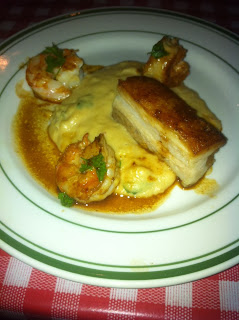 Other dishes I would like to return and try from the menu include confit rabbit and pig cheek tacos. During this service I found out from the front of house team that Bob was running the show in the kitchen single handedly as all the chefs were down. However Bob still found time to make an appearance and talk to everyone to make sure things were ok and generally get to know his customers. The lobster van is one of our favourite street food vendors and Bob's & Co is serving up an interesting menu different in the London dining scene. 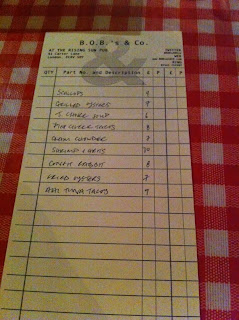 Email ThisBlogThis!Share to TwitterShare to FacebookShare to Pinterest
Labels: London, Pop Up, Seafood