Arbutus is a one michelin starred modern French restaurant based on Frith Street in buzzing Soho, London. It appealed to me since I found out that the restaurant offered counter seats which is always preferably for me when dining alone. I guess I still feel a little awkward when sat at a table alone, with the feeling of not knowing where to look and just making myself look uncomfortable.

A value pre theater menu is available at £21 for 3 courses, but the a la carte seemed much more enticing. One dish in particular that caught my interest was the famed squid and mackerel burger with cornish razor clams. This was a plate of beauty, much more refined than earlier versions of the dish which are on the internet. What it delivered in looks also delivered in taste, mackerel and squid are quite delicate and they both shone without any ingredients dominating the dish. Along with razor clams it was a very enjoyable starter. 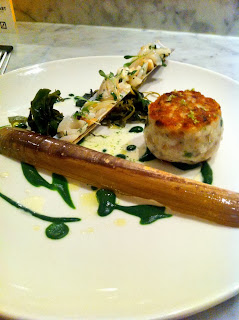 My main course of saddle of rabbit, beetroot, pear and bee pollen came with a separate small pot of slow cooked shoulder cottage pie. The rabbit was wrapped in ham and was well cooked, the rabbit was the best I have had in a while. I found that the pear and bee pollen was different and fresh, however a little sweet towards the end of the dish. The cottage pie bulked up the dish but lacked flavour and seasoning. 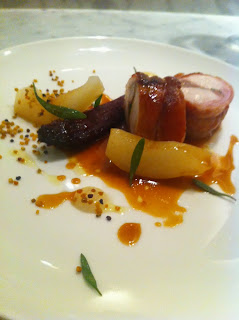 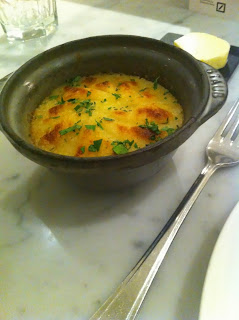 I also wanted to try pieds et paquests - lambs tripe, shoulder, trotters but didn't want to brave using my hands and making a mess in front of the counter staff. For dessert I had what was billed as warm English treacle tart with creme fraiche. It was sweet and sticky as expected for a treacle tart but lacked the warm element. 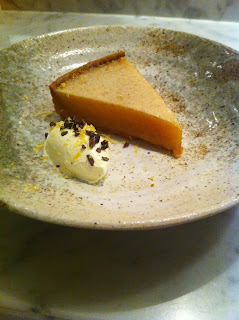 A pleasant dinner for one, with the starter being the standout.  Safe and steady but that's what one craves at times.