On The Bab, London

Continuing the Korean trend around Shoreditch, On The Bab brings Korean inspired street food to the area. Situated on Old Street it is only a couple of minutes from Jubo on Rivington Street. I visited last week on the first night of its soft launch where 50% was offered off the food bill. Occupying a small space tables are packed tightly together with a small wall facing bar table to make the best use of the space. An open kitchen provides diners full a view of the theatrics of the dishes being prepared. 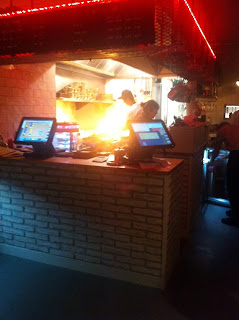 Sticking to the small dishes section of the menu I had to order my favourite Korean dish, Yangyum chicken. Served with crush peanut and a sweet spicy sticky sauce this is one of my guilty pleasures. The chicken was nice and moist and the sauce was perfectly balanced between sweet and spicy. Coupled with ice cold Hite this is one of lifes simple pleasures. 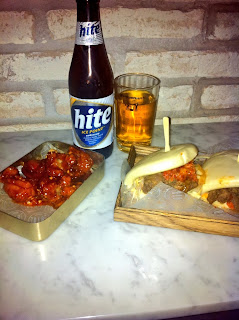 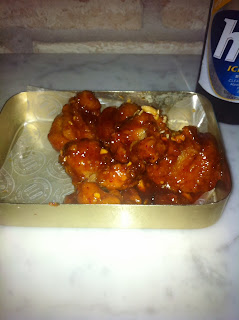 Being a fan of beef bulgogi I ordered it from the On The Buns section of the menu, not fancying a filling rice dish.  The fluffy buns were much bigger than I had anticipated and were a bit messy to eat with the sauces breaking up the bun, the beef however was not as flavoursome as I hoped with it being bulgogi. 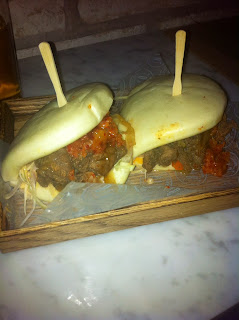 Other dishes that had me intrigued were the Bab Twigim, described as Korean style kimchi and cheese arancini with koba spicy sauce. These came piping hot straight from the fryer and were very additive. Cheese and kimchi with rice seemed a strange combination but worked quite well together. 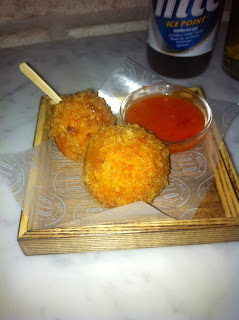 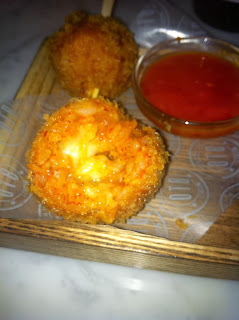 From the Twitter feed I noted that the plum tea was a big seller so I had to see what the fuss was about. Not being very well during the week this was the perfect drink, hot sweet fragrant plum tea. This was seriously soothing without being too sweet. 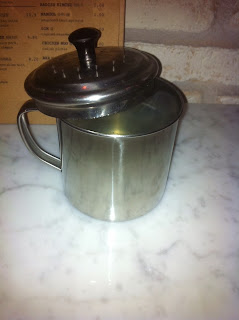 Other dishes I tried included the classic Jap Chae and pan fried chicken dumplings. The glass noodles were topped with egg which was new to me, the dumplings however were pretty average. Some of the bigger dishes on the menu look quite interesting including stews and bibimbaps. They were also very generous portions from what I could see. 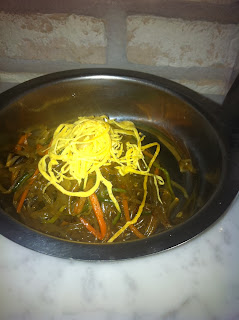 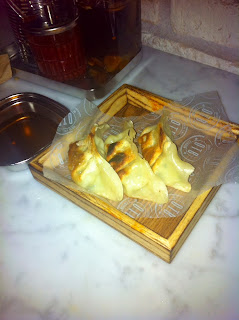