We visited for a light meal on Christmas Eve nearly giving up trying to find a parking space with it beginning to rain heavily. At the last try a space had become available right outside. We were quickly seated and told we had the table for 40 minutes. Mr Nom noted that since the last time he had visited some four years ago it had doubled in size.

The service was swift and efficient and dishes arrived quicker than I expected. The vongole pasta dish was lovely, fresh fettuccine with clams, tomatoes, chilli and parsley. There was a generous amount of clams and the dish had a kick from the chilli. I was surprised there wasn’t much sauce with the dish but it didn’t need it. 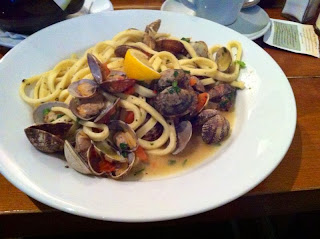 The pizza base was light but the tomato sauce lacked depth. Topped with small amounts of ham, mushroom, parmesan and pine nuts. 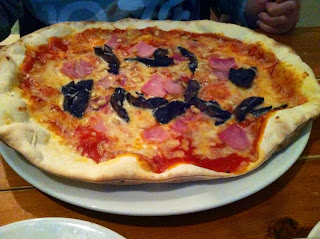 Time was ticking but we figured we could still fit some of the home made cakes. We chose red velvet and a gluten free cake.  The red velvet was delicious however towards the end it got a bit sickly. 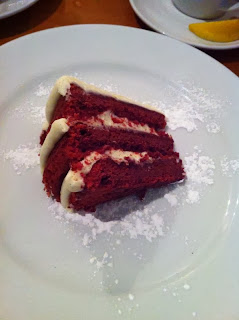 The gluten free sponge cake came with cream and fresh berries and was quite good although Mr Nom was not particularly fond of the texture. 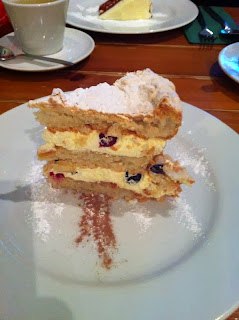 It was starting to get very busy which was surprising with it being Christmas Eve and we overheard other customers being told tables were needed back in 30mins. The service however was good and we hope to return when it is less quiet so we do not feel pressured to gulp down our food and drinks.